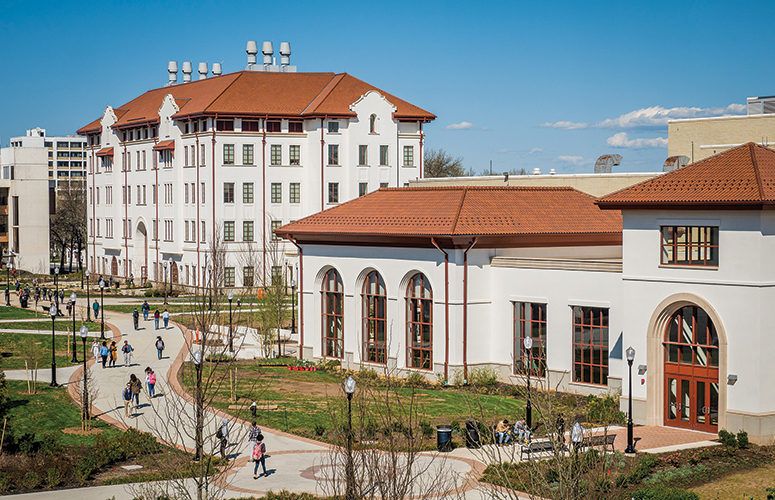 Many prospective students are attracted to the architecture and design of Montclair State University’s campus.

Why New Jersey Colleges/Universities Can be Appealing

New Jersey has among the nation’s top-rated K-12 education systems, yet each year about 40% of its college-bound high school graduates leave the state to attend higher education institutions elsewhere – and these students often don’t return.

The scenario has vexed both educators and the business community for decades, and experts say it may stem from several meta-causes, including, but not limited to students’ various cost/tuition concerns, as well as a dearth of “brand name” higher education institutions in the Garden State.

Within the affordability realm, New Jersey’s tuition rates for its public four-year colleges and universities, for example, are high when compared to many out-of-state tuition rates – a long-standing reality driven in part by the state’s well-known fiscal woes and lack of higher education funding. Students can sometimes obtain the proverbial “away-from-home” experience at financially affordable costs.

And while Princeton University remains a pinnacle global higher education destination, many other Garden State colleges and universities, again, arguably lack widespread public recognition outside of the state (there are, of course, numerous and notable exceptions to this potential “knee-jerk,” debatable statement).

It might be asserted that Montclair State University (MSU) has largely ascended New Jersey’s higher education troubles over the past 20 years, building new educational facilities, dorm rooms and adding degree offerings – and approximately doubling its enrollment to 21,000 students in the process.

MSU’s Vice President for Communications and Marketing Joseph A. Brennan tells New Jersey Business, “Our message is two-fold: If you build excellent programs that respond to student and employer needs, New Jersey residents will stay here. We are proof of it. And we need to look beyond traditional college-going populations, and throw our doors open to everyone.”

With 97% of its students coming from in state, Brennan says, “[MSU] is successfully attracting the in-state student. I will also [say] that if you’re educated in New Jersey, you tend to live and work in New Jersey.” (Ninety percent of Montclair’s graduates from over the past decade still reside and work in the state).

How is MSU succeeding, specifically? Brennan says the institution uses many methods to keeps tuition costs at reasonable rates, while it has also added more than 80 aforementioned degree programs in the past 20 years.

Brennan explains, “Today’s student – more than at any time in my career – is absolutely focused on employability. They really want to know: ‘What will my career prospects be with this [academic] degree?’”

MSU’s answer to this question centers on degree offerings in emerging career categories ranging from cybersecurity and voice technology, to social work and nursing, for example.

MSU’s Director of Undergraduate Admissions Jeffrey Gant echoes Brennan’s sentiments, yet adds: “I hate to sound kind of hokey and folksy here, but the reality is that when students and families walk onto this campus, there is a ‘Wow!’ factor. There is this perception that ‘I had no idea that this was here.’” (The institution has an array of white, Spanish Mission style architecture buildings with red roofs on 486 acres, located about 16 miles west of Manhattan).

Gant says his admissions office – in one capacity or another – also visits almost every single high school throughout New Jersey during the course of a year. He adds, “We are [additionally] going to college fairs, large and small.

“[We succeed] by being out in our communities, talking honestly and authentically about what goes on at Montclair State University, and how transformative it can be for [a student].”

Stockton’s Chief Enrollment Management Officer Dr. Robert Heinrich says, “[We] are really promoting that ability to get away from home. … For many students, [we are] almost farther away than going to some of our surrounding out-of-state peer institutions.”

This “brand awareness” – as Heinrich terms it – operates in tandem with students’ cost concerns. On that front, Stockton has developed partnerships with approximately 10 county colleges where students can first attend them at lower tuition rates before matriculating at Stockton.

“We [also] have a large number of students who complete business degrees and then enter into entrepreneurship, finance, marketing management as well as criminal justice,” he explains. “There is a huge focus on preparing our next generation of law enforcement, and a lot of those jobs remain in the state, particularly new law enforcement elements like cybersecurity.”

The ability for students to remain on campus year-round is also a draw which accelerates degree completion time, lowers tuition costs – and gives them access to hundreds of area employers with internship opportunities.

“Over the last 20-plus years, we have [also] added new academic programs to meet the demands of changing careers that exist for our students,” Heinrich explains. “Part of that involves bringing in new, state-of-the-art facilities to support those academic programs. For example, [we] have nursing simulation labs and lab spaces for all of the sciences.”

New Jersey’s higher education institutions’ striving to attract and retain students is occurring against the backdrop of increased competition for students and an associated lower birth rate – which means fewer students, overall.

Yet, in what most experts report as a positive development, Secretary of Higher Education Zakiya Smith Ellis recently helped establish a state education plan which aims to strengthen and improve higher education access, for example.

New Jersey may be losing students to out-of-state competitors, but many of the state’s more than 65 higher education institutions are aiming to combat the trend – and perhaps boost the state’s business climate in the process.