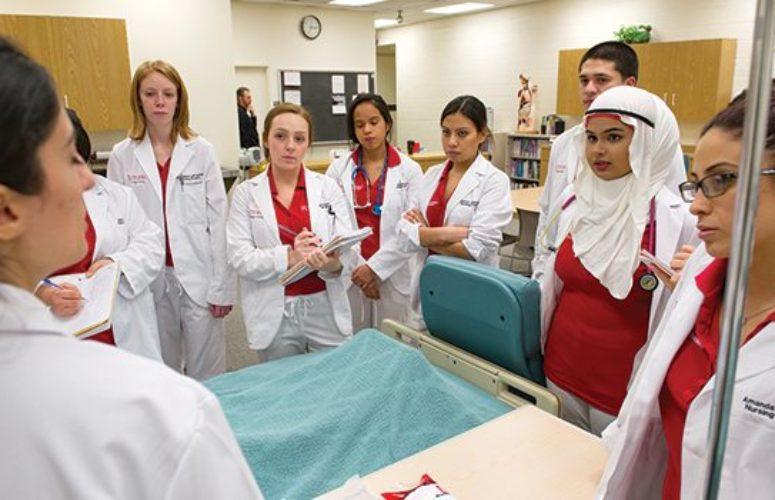 Bachelor of Science in Nursing (BSN) students learn about transfusion techniques in the simulation lab on the Rutgers School of Nursing’s Newark campus.

Bachelor’s and other higher degrees key in securing jobs.

As healthcare continues to change and its needs continue to grow, the demand for nurses, not only in New Jersey, but across the United States, has been rising dramatically. Additionally, the demand for nurses who are highly-educated and highly-qualified is growing. A 2010 report released by the Institute of Medicine (IOM) and the Robert Wood Johnson Foundation titled “The Future of Nursing: Leading Change, Advancing Health,” recommends that by 2020, at least 80 percent of all nurses should have baccalaureate degrees.

“The demand over the past number of years has been for nurses with bachelor’s degrees,” says Dr. Filomela Marshall, dean of the W. Cary Edwards School of Nursing at Thomas Edison State College. “So, those nurses are the ones who are being hired first in healthcare systems and hospitals. Research indicates that the higher the level of education in the nurse, the better the patient outcome will be.”

“Most of the hospitals in New Jersey are Magnet designated hospitals – an accreditation given by the American Nurses’ Credentialing Center (ANCC), an affiliate of the American Nurses Association, to hospitals that satisfy a set of criteria designed to measure the strength and quality of their nursing,” says Judy Schmidt, CEO of the New Jersey State Nurses Association (NJSNA). “One of the requirements is that a hospital’s nursing staff has to have a certain percentage of bachelor’s degrees. So, what we are starting to see is that nurses with only associate’s degrees are finding some difficulty in finding jobs, especially around this [geographic] area. That’s not to say they won’t find jobs; there are just fewer of them available for the associate degree nurse today.”

However, Schmidt says that colleges and universities in New Jersey are doing an excellent job in preparing nurses to meet this need.

“Schools around the state have good student enrollment in their nursing programs and are doing what they need to do to educate them in order to meet the needs and requirements of the healthcare industry today,” she says.

Due to the calls for baccalaureate-prepared nurses, HackensackUMC Mountainside Nursing School is in the midst of a transition, which reflects the emerging changes in the profession. Earlier this year, Mountainside moved its two-year registered nurse (RN) diploma program to the campus of Montclair State University (MSU), while suspending enrollment in the program. Mountainside says it is analyzing the types of programs that will best serve the needs of students and the profession.

However, the school is “responding to a shortage of experienced nurses” with the creation of in-house internship programs. The school recently established two programs: An Operating Room (OR) internship program led by an experienced OR nurse educator, in which seven RNs from HackensackUMC Mountainside and three from its network affiliate, HackensackUMC at Pascack Valley, are currently being trained using a continuing education curriculum sanctioned by the Association of Perioperative Registered Nurses; and an Obstetrics – Labor & Delivery RN internship program, which the school is about to begin. A nurse educator who is experienced in teaching a curriculum endorsed by the Association of Women’s Health, Obstetric and Neonatal Nurses will be teaching the course. Seven of the 10 nurses who complete it will be new hires at HackensackUMC Mountainside and three will be working for Pascack Valley.

And, while the final cohort of Mountainside’s two-year RN diploma program will be finishing up at Montclair State in June of 2016, MSU has plans to develop its own nursing programs in order to meet the demand.

“We have been looking at the possibility of launching a school of nursing here at Montclair State and recently, our board of trustees gave us the approval to move forward with that initiative,” says Jack Shannon, vice president for university advancement at MSU. “Beginning in September of 2016, we are scheduled to have a program where RN degree students will be able to get their Bachelor’s of Science in Nursing (BSN). The following year, the plan is for us to launch a full BSN along with related graduate and doctoral programs.”

Dr. William L. Holzemer, dean and professor at the School of Nursing at Rutgers University, says that today’s market for nurses is in transition.

“Fifteen years ago, anyone who graduated as a RN could basically go anywhere and get a position and often a bonus,” he says. “Now, it is not so simple. Most nurses who graduate as RNs in the state come from diploma and community college programs. So, they face a dilemma of having just finished their schooling and then having to go right back to finish their bachelor’s degree because hospitals simply won’t interview and/or hire them. So the job prospects for baccalaureate-prepared nurses are much, much better. And, of course, hospitals are always looking for experienced nurses.”

Rutgers University has a myriad of options for students. The university offers a four-year BSN for high school students entering college or transfer students. It also has: a second degree baccalaureate program, which is a 14-month program designed for students who have a bachelor’s degree in a field other than nursing; an online RN to BSN program, which allows RNs to obtain a bachelor’s degree with a graduate degree option; a Master’s of Science in Nursing (MSN) in several specialties, such as informatics, clinical leadership and nursing leadership; a Doctor of Nursing Practice (DNP) post baccalaureate program in several specialties, including family nurse practitioner, nurse anesthesia and nurse midwifery; and a Ph.D. program in nursing science.

Dr. Marie Foley, dean of the College of Nursing at Seton Hall University, says the nursing profession is becoming more integrated today, with a higher number of minorities and males being interested in the profession.

“At Seton Hall, our student population is very diverse,” she says. “They are diverse economically, racially and in gender, and those numbers seem to be increasing.”

Not only has the demand accelerated for nurses with higher education, but the demand for more nurses in general is rising and will continue to rise.

“The need for nurses is also due to the aging population,” says Thomas Edison’s Marshall. “All of the Baby Boomers are aging and there are a lot of folks that are going to need a lot of care. It has already started, but within the next 15 years, there is going to be a lot more people over the age of 85. People are living longer today and have more chronic illnesses.”

The W. Cary Edwards School of Nursing at Thomas Edison State College is helping to meet the demand by offering several different tracts for nurses and nursing students. The college offers: A RN to BSN program; a RN/BSN to MSN program with preparation as a nurse educator, nurse administrator or nursing informatics specialist at the master’s level; an accelerated second degree BSN program; and graduate nursing certificate programs that are designed for experienced RNs with a master’s in nursing “who want to develop the knowledge and skills needed to practice in another area of nursing specialty.”

Marshall says that other challenges the industry is facing are how the cost for healthcare is continually rising and how the reimbursement for care works.

“The cost for healthcare is always going up and the regulations for reimbursement are always changing, so nobody knows what is going to happen,” she says. “And, care is moving away from the hospital setting to an outpatient setting, while the focus is on trying to keep people well before they get sick, in order to keep them out of the hospital. So, everything in the industry is in flux right now.”

Rose Santee, associate dean of the Trinitas School of Nursing, adds that the focus today is on community health and disease prevention.

“In the past, the focus was just on curing illness,” she says. “Now the focus is on prevention, and nurses play a big role in that and will continue to do so.”

Santee also says that the lack of nursing educators has been, and will continue to be, a large problem for the industry.

“There won’t be enough faculty to teach incoming nurses,” she says. “Nursing educators are Baby Boomers as well, and they are going to be retiring shortly. Not enough individuals and young people want to get into teaching.”

Santee says that the federal government is helping solve this problem by “giving individuals scholarships, and the state of New Jersey is very active in getting nurses to go into nursing education.”

The Trinitas School of Nursing, in partnership with Union County College (UCC), offers a cooperative nursing program in which students can receive a diploma in nursing as well as an associate in science degree from UCC. The diploma and associates degree give students the ability to transfer to a BSN program right after graduation.

NJSNA’s Schmidt emphasizes that nursing is a “great” career and will continue to be for the foreseeable future.

“There are so many opportunities for nurses, it is unbelievable,” she says. “A nurse can work in an acute care, long-term care or assisted living facility. A nurse can be an educator working in a college or university. A nurse can work in an operating room, on an airplane as a flight nurse or become an entrepreneur. The list goes on and on. … And, nurses get paid extremely well. They can start at around $60,000 and make up to $150,000, depending on qualifications, experience and the field they are in.

“As a profession, we need to have more young people,” she concludes. “The average age of a nurse is around 50, and older nurses will be retiring as the economy continues to improve. So, we need to have students really think about a career in the field. There will be more positions opening up in the community, and nursing has been the No. 1 most trusted profession for decades. It is well-respected, challenging, and yet, rewarding. If someone is interested in helping people, nursing is really the profession for them.”

Common Annuity Mistakes and How to Avoid Them