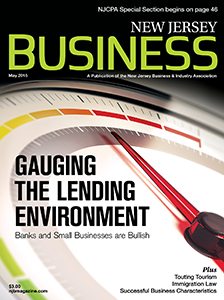 Since the Great Recession and subsequent passage of the Dodd–Frank Wall Street Reform and Consumer Protection Act, there have been numerous media reports about financial institutions tightening their lending spigots because of the stricter banking regulations. And small businesses were feeling the pinch as banks were careful regarding whom they loaned money. The most stable and risk-free businesses received funding … but what type of business was risk free when everyone was climbing out of the biggest economic hardship this country had ever faced since the Great Depression?

This month’s cover story, titled “Gauging the Small Business Lending Environment,” looks at where banks and small businesses stand in the lending game today. According to Contributing Writer Sharon Sheridan, with an improving economy and low interest rates, small businesses are taking advantage of a competitive borrowing environment as they begin expanding their businesses again.

According to Martin Gallagher, chief lending officer at Beneficial Bank, the environment is very competitive for banks because they have worked out their problem loans and have improved their balance sheets and liquidity.

What financial institutions like about New Jersey, in particular, is its diversity of business. “We are not tied to any one industry, which, I think – in itself – makes us healthy,” reports Bob Young, PNC Bank business market manager for Central New Jersey small business banking.

This article is a must read for businesses still sitting on the sidelines and not expanding as they should because of past banking experiences.

Assistant Editor Anthony Bucci’s article, titled “What Makes a Successful Business,” focuses on the top characteristics all flourishing ventures have in common. Compiled through interviews with leading business mentors and consultants in the state, the story and accompanying list bring together in one place the many principles we often hear about regarding successful business practices.

Meanwhile, every successful business person needs a vacation, and in Managing Editor George Saliba’s story, “Touting Tourism,” we read that New Jersey is still a great place to escape to for fun and recreation. Despite Atlantic City’s casino closings, statewide tourism revenues reached a record $42.1 billion last year, a 3.8 percent increase from 2013. As Lt. Governor Kim Guadagno stated at this year’s New Jersey Conference on Tourism, “We have bounced back from an economic recession. We have bounced back from Superstorm Sandy.”

We hope you enjoy these and other stories in this issue.

What Makes a ‘Successful’ Business?

Time to Talk About Money With Aging Relatives

Advancing Opportunities for Those with Special Needs