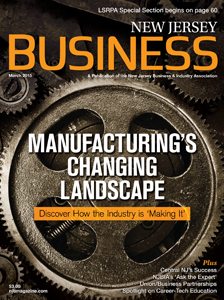 Manufacturing in New Jersey, for the most part, is no longer the domain of large companies employing thousands of workers on hundred-acre plants, but rather smaller, more nimble businesses that take advantage of high-technology and can rapidly shift production. The problem, however, is that most of the population in New Jersey thinks that the industry is dying, as they are accustomed to hearing news about manufacturing jobs leaving for other parts of the country and world where the cost of doing business may be less expensive.

A closer look at the state’s manufacturing base, however, reveals an industry that is surviving and “making it.”

As Contributing Writer Eric Peterson’s cover story “Manufacturing’s Changing Landscape” reveals, the industry is still an important part of the Garden State’s economic landscape, representing 8 percent of gross state product. According to John Kennedy, president of the New Jersey Manufacturing Extension Program, there are some 11,000 manufacturers in the state, representing an employment base of 330,000 jobs, and generating $40 billion for the state’s economy. For every one manufacturing job, four other jobs in fields such as engineering, logistics, transportation and maintenance are created.

Cliff Lindholm, co-chair of the New Jersey Business & Industry Association’s Manufacturing Network and president of Falstrom Company, reports that his peers are talking more about “on-shoring” or “re-shoring,” in which manufacturers with global operations are bringing some parts of their operations back to New Jersey. “That’s a really positive sign,” he says.

This feature story, which begins on page 34, is an eye opener that can make any state resident proud about what is being “Made in New Jersey” … speaking of which, is the title of NJBIA’s annual event, to be held on March 26 at the State House. On that day, manufacturers will showcase their companies and products to state legislators and news organizations.

Complementing this feature story is Contributing Writer Lorna Pappas’s article, “Career-Tech Education Finally Graduates.” Beginning on page 41, the story details how the education and workforce development debate shifts from “college for all” to “skills beyond high school for all.”

The Value of an Integrated Marketing Plan

It’s All in the Tape

Unions and Businesses: Partnering for Excellence

A Mission to Help