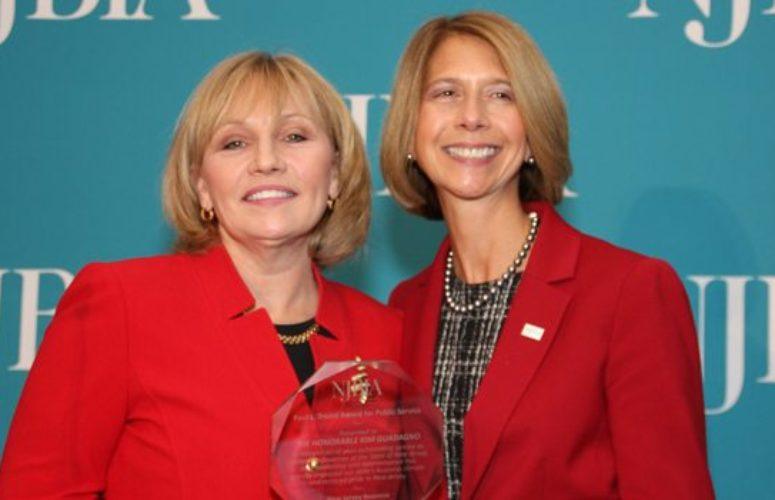 Experts weigh in on the future of the state’s business climate.

The 2017 NJBIA Impact Symposium, held on December 9, gave attendees a glimpse of what the New Jersey business climate may look like, as the state – and country – stare down the barrel of change in the coming year and beyond.

The day was ripe with spirited conversation and commentary in three separate panel discussions – where business executives, legislators and top political pundits weighed in on the many issues that New Jersey faces.

“It’s your job to come to me and tell me where and when I am in your way,” Guadagno said, emphasizing her pursuit of being approachable and reachable to the citizens and businesses of New Jersey. “We, the bureaucrats, need to be reminded that we work for you … fighting for companies to stay and grow in New Jersey, fighting for things that will keep jobs in New Jersey. … I love that job.”

NJBIA President and CEO Michele Siekerka began the event, held at the Bridgewater Marriott, by presenting an overview of NJBIA’s 2017 Business Outlook Survey findings – which show that members expect hiring, sales and profits to rise in 2017; and that they are confident and optimistic about their own businesses’ prospects, because it is something that they can control.

However, they still report concerns about the state’s economic future. The cost of health benefits, property taxes and the cost of doing business in the state are their three biggest concerns, and more than two-thirds of members say a $15 minimum wage will negatively impact their business.

Siekerka also said that outmigration is still a major issue in the state, pointing out that New Jersey has lost a total of $20.7 billion in net adjusted gross income in the last 11 years. This has led to a loss of 87,000 jobs, $4.6 billion in lost labor income and $13 billion in lost economic input.

The Economic Outlook panel saw five top level business executives discuss the state’s economic future and share what they see from their own industry perspective. They also expressed their thoughts on the election of Donald Trump, enactment of comprehensive state tax reform and the ever-challenging cost of healthcare.

“Certainly, there is a great deal of transition from an economic standpoint, but also from a political, social and historical standpoint. There is a lot of uncertainty … and we all want to know what this means for our state,” said panel moderator Linda Bowden, New Jersey regional president of PNC Bank.

“The easy thing for a company with our market share to do is keep issuing double-digit premiums and call it a day, but we have 3.8-million customers who are saying the status quo is not sustainable. [New Jersey] has the second highest healthcare costs in the United States.”

Castner emphasized the importance of a “strength in numbers” approach when presenting potential proposals for low cost healthcare, and said it is imperative to get a permanent coalition of like-minded people together in order to better convey the message to stakeholders that the status quo is not acceptable.

Walter Brasch, president of the NJ Society of CPAs, said the recent tax reform initiative is an example of what New Jersey needs more of.

“Just take the Estate Tax reform,” Brasch said. “Clearly, our members feel that’s a positive. Now, we’re telling clients ‘you don’t necessarily have to move out of New Jersey and migrate to Pennsylvania’ or wherever you were going to go.”

Brasch said the change will certainly help stem outmigration, but members do still have concerns about affordability and property taxes, which will need to be addressed sometime in the near future.

Philip McGovern, managing partner with the law firm Connell Foley, is taking a “wait-and-see” approach with how dramatic of an impact the tax reform changes will have on outmigration.

“Will the changes be the tipping point for keeping folks here? Or are there other issues that are going to be just as important?” he asked.

McGovern said there is no doubt that the Estate Tax repeal will be a big benefit to business owners unsure about what to do with the family business.

Rick Thigpen, vice president, state governmental affairs of PSEG Services Corporation, reacted to how the election of Donald Trump would affect the national energy policy, stating that it is not entirely clear what the new administration is going to do.

“The issue of climate change is always there, one step behind,” Thigpen said.

He expects some business pressure to stick with fossil fuels, and predicts more of the same in terms of the federal government moving slowly on the issue of climate change and carbon reduction, with the state government interested in moving much more quickly on the issue.

“There’s not a business in our state that doesn’t think that a reliable source of electricity is not an important part of their business model,” Thigpen said.

NJTV anchor Steve Adubato moderated what he prefaced as a “candid and constructive conversation” between four distinguished members of the New Jersey State Legislature. These leaders talked about the importance of bipartisanship and how working together to get things done has made business owners optimistic about the future.

“I think the Legislature sent a strong message with the elimination of the Estate Tax and the Transportation Trust Fund renewal … that we could work together in a bipartisan manner, and we are hoping that this will also happen on a national level,” Senator Paul Sarlo said.

Senator Anthony R. Bucco said that businesses will suffer if they are not actively trying to grow their business (investing in equipment and hiring people) due to fear of something negative happening.

“I’m very optimistic. In business, you have to be optimistic, otherwise you start to fall behind,” he said.

An issue that has split the Legislature and will continue to be debated is the proposal to raise the state’s minimum wage to $15 an hour. Assemblyman Gary Schaer pointed to the economic revitalization that comes with the Transportation Trust Fund and argued that a similar revitalization would occur with a raise in the minimum wage.

“Our neighboring states are going in similar directions [raising the minimum wage] – it makes us more competitive and it ensures a better trained workforce,” Schaer said. “I think in terms of the long-term goal that we don’t necessarily speak of in addition to the more pragmatic short-term; a $15 minimum wage is not only incredibly important, but incredibly necessary.”

Schaer pointed out that an individual earning minimum wage makes $17,000 a year – $7,000 below the poverty line.

Assemblyman Anthony M. Bucco disagreed with a raise. “I don’t think it will help the business community, and I think the business community has stated that loud and clear,” he said. “When you begin to raise the minimum wage, companies can’t afford to keep as many employees. … When you start to shrink the number of jobs available in an already staggering economy – and the cost of living is already high – that’s a cocktail that proves that Millennials are leaving at rapid rates.”

Bucco argued that another aspect that is often missed is the question of what to do with municipal and non-profit workers’ wages if the minimum wage were to increase. Those programs are funded through the state’s budget, and he said that if they [wages] were to increase, the only way to meet the costs would be to raise taxes.

Senator Sarlo stated that he has not yet decided where he lands on the issue, but did say that anyone who is making the minimum wage is pouring that money back into the economy.

“In regards to companies getting more efficient and cutting back on labor, I think that’s happening regardless of whether the minimum wage is raised or not,” Sarlo said. He went on to say that manufacturing and similar jobs are likely to become more automated in the future regardless of the cost of the minimum wage.

There is also a real concern over the current pension situation in the state. Senator Sarlo said that quarterly pension payments, which just passed the Legislature unanimously (Gov. Christie signed the bill a week later), will force the next administration to make pension payments on a quarterly basis and should help make a dent in the pension crisis.

“We need to look at a way to protect the older employees from being harmed. … We have to make the payments to protect them,” Assemblyman Bucco said. “To the newer employees coming in, there has to be a change to the system or we will continue to go deeper into debt. The problem is identifying where you make that change.”

Winning Strategies Public Relations, LLC Chairman Jim McQueeny moderated the pundits panel, which had top political analysts discuss the surprise presidential election of Donald Trump and the impact it will have on the upcoming gubernatorial election in New Jersey.

Addressed first was the decision by the Trump Administration to leave Gov. Christie out of a position in the White House. Roger Bodman, senior partner of Public Strategies Impact, said he still believes the Governor has a “very decent relationship with the President-Elect”, but was only truly interested in having a key position in the administration. “I was told that [Gov. Christie] was talked to about some of the lesser cabinet positions within the administration. … I’m not sure it was the 100 percent rejection that some people think,” he said.

Nick Acocella, editor and publisher of Politifax New Jersey, then weighed in on the state of each party as the race for the new governor heats up. For the Democrats, he said, “The only thing that matters in primaries is money and lines. Phil Murphy has all the lines and he has all the money that he could possibly use. … Anyone else has a very steep uphill climb … I mean very steep.”

Julie Roginsky, principal, Comprehensive Communications Group, LLC, addressed Phil Murphy’s surprising rise as the Democratic frontrunner, saying, “He started hosting a ton of town halls and reaching out to voters in a variety of innovative ways not only through media. … He met with voters and went to events. He’s talked to [business leaders] to get their views on policy – he’s spent as much time on policy as he has on politics.”

In terms of the Republicans, Acocella believes it is going to be very difficult to beat the Lt. Governor, saying that Christie may have actually done her a favor by “leaving her out of everything” and keeping her in the dark on many occasions.

The panel was skeptical of the ability of Lt. Governor Guadagno to get out from the shadow of the current administration and carve her own successful path to the governorship, despite Bodman describing her as a “very, very bright woman.”

“I think she would actually be a terrific governor,” said Gail Gordon, counsel, Florio Perrucci Steinhardt and Fader.

Finally, McQueeny asked how much juice Gov. Christie has left for his remaining time as governor. “I would never discount Chris Christie,” Bodman said. “This is still the most powerful governorship in the nation.”

He then referenced a quote which the governor said, “‘I will go out as I came in … loudly.’”

“I believe him,” Bodman said.

Reimagining the Road to Success

Purpose Meets Profit: How Non-Profit & For-Profit Organizations Can Work Together