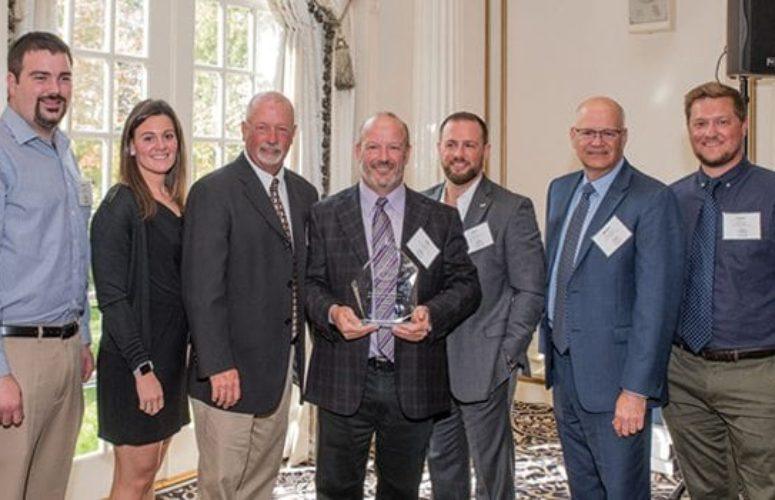 The family members and staff of Russell Reid, which was founded in 1964.

Businesses with Annual Sales/Revenues of $10 Million and Over

Fifteen multi-generational family businesses were honored recently by the Rothman Institute of Innovation and Entrepreneurship at Fairleigh Dickinson University during the institution’s 25th annual New Jersey Family Business Awards. The event, held at the Crystal Plaza in Livingston, recognized the significant contributions to the economy and community made by those businesses and families.

Master of Ceremonies Sally Glick, principal and chief growth strategist at Sobel & Co., told the audience, “FDU has been at the forefront, since 1992, in putting the spotlight on the state’s family business community, recognizing the significant impact that family businesses have had on New Jersey’s economic landscape.

“While a family business starts with the vision of an entrepreneur, it is sustained through the decades by each generation making [its] own critical contribution to the family’s future success.”

Glick said that family-owned businesses have a commitment to community, contribute to charitable organizations, encourage and engage their employees, focus on long-term strategies, invest in their dreams and hold fast to their core values.

Edison-based Russell Reid & Mr. John, founded in 1964 as Mr. John by Morton Weiner, began constructing portable toilets out of five sheets of plywood and a steel drum. Over the years, demand for clean, temporary restrooms continued to rise as construction companies and special events producers recognized that people would be more productive and spend more time at outdoor events. Early signature events included the 1973 Watkins Glen Rock Concert and the 1976 Bi-Centennial Celebration in Philadelphia and, most notably, numerous US Open Golf Tournaments. The year 1981 was the perfect time to expand services and acquire Russell Reid, a small septic pumping business. This enabled the company to add non-hazardous hauling, grease trap pumping and many other related services. In 1991, the second generation gained control of the company, expanding it into Long Island, Pennsylvania and southern New Jersey. The company today employs 292 people with seven family members involved in the business.

Garden State Tile Distributors, Inc. was founded in Roselle Park in 1957 by Fred Fischer. In 1982, the company had already expanded to four locations when Fred transferred ownership to his two sons, Stephen and Jack, and in 1987, to his third son, Robert. Stephen became president in 1997. Recently, nephew Eric, and grandsons Stephen Jr. and Christopher joined the company. Garden State Tile has grown from one store to 12 locations, expanding out of New Jersey to Savannah, Georgia with distributors from Florida to Boston. The company currently employs 135 with seven family members actively involved. Garden State Tile continues to be a source for extraordinary floor and wall tile from dozens of manufacturers around the world. At its showrooms, one can find a broad selection of tiles including: natural stone, decorative tile, ceramic, porcelain, artisan crafted glass mosaics, and basic builder grade ceramics. New Jersey showrooms can be found in Roselle Park, West Berlin, Wall, Dayton and Dover. :

Huntington Learning Center is the nation’s leading tutoring and test prep provider for the K-12 market, with nearly 300 franchised and company-owned locations in 40 states. The center was founded in 1977 by Dr. Raymond Huntington and his wife Eileen, with the mission to give students the best education possible. Eileen was a junior high and high school teacher in New York City and New Jersey, where she saw firsthand the difficulties her students had with basic writing, reading and math skills. Meanwhile, Raymond was working in business research at AT&T. He brought his business acumen to the new company, while Eileen focused on the educational aspect. In 1985, the couple expanded the company by franchising, and daughter Anne, who joined the business in 2014, is now the company’s vice president. The center, with headquarters on Oradell, has a total of 1,325 employees. As Huntington looks into the future, its continued goal is to build skills, confidence and motivation in students.

It all started in Dan Andersen’s basement in 1974. After gaining experience working as an estimator and project manager in New York City and New Jersey, Andersen decided to go into business for himself and founded The Andersen Corporation. He managed that company through a phenomenal growth phase before selling it in 1986 and starting Andersen Interior Contracting. After the original company closed in 1988, Andersen was able to bring over the best of his former staff to his new venture. Then in 1989, he started Corporate Woodworking as a separate company with a focus on high-end architectural woodworking. Today, Corporate Woodworking ranks as one of the northeast’s premier woodworking companies. Dan’s son, Mike, nephews Leif, Mark, Steven and Jimmy, and daughter, Michelle, are all involved in the business as well as Dan’s brother, John. The Fairfield-based company employs more than 300 people. The company also has a southeast regional office in Palmetto, Florida.

Borden Perlman Salisbury & Kelly is a fourth generation family owned business with roots going back more than 100 years. Perlman Insurance was founded in 1915 and the W.S. Borden Company was formed in 1924, both in Trenton. The two firms merged in 1996. Its current principals, Jeffrey Perlman and Douglas Borden, are direct descendants of the original founders. Their sons, Jeremy Perlman and Christopher Borden, have recently joined the firm, resulting in three generations of two families being actively involved in the company. The agency maintains property, casualty and accident licenses in 48 states, in addition to a Surplus Lines License in New Jersey, and prides itself on exceptional insurance service and broad community support. The firm, which is based in Ewing, covers some 1,900 households, 475 college sports programs and 2,400 businesses, representing $95 million in written premiums. It employs 75 people, with five active family members involved in the business.

Calandra Enterprises is a success story based on the vision and hard work of Luciano Calandra Sr. who immigrated to the US in the 1950s, opening a bakery in Newark in 1962. Luciano taught his sons, Luciano Jr. and Anthony, the inner workings of the bakery, but also instilled in them his business principles: a strong work ethic, an emphasis on family, and a belief that the customer is always right. More than 50 years later, Luciano’s philosophy remains the guiding light for the family business, which now boasts three restaurants, four hotels, and three bakeries, and is a major producer and distributor of homemade breads, Italian foods and family made wines. Calandra employs more than 700 people. Five family members are actively involved in the business, including Luciano Calandra Sr., (87), his two sons, and two grandchildren; Kristen and Thomas Calandra. Bakeries and restaurants are located in Newark, Fairfield and Caldwell. Hotels are in Fairfield, Carlstadt and Jersey City.

Norwalt Design Inc. was founded in 1971 when Norbert Sietel, vice president – along with co-founder Walter McDonald – was inspired to own and operate a company that supplies the manufacturing industry with the necessary operating machinery to produce durable products. The company provides custom design, engineering and production of closure handling systems to automate the after-molding handling, decorating and assembly processes for multiple industries. The key to the company’s success is that it can fully produce an entire production line/system at its 40,000-square-foot facility in Randolph. Here, the company can run a full test environment for a minimum of 8+/- hours for its client’s approval and verification prior to machinery break-down, shipment and full installation at the client site. Today, Norbert’s son, Michael, works directly alongside his father and manages the daily operations of the business. Michael’s children, Matthew, Kyle and Trevor, are already involved in the business on a part-time basis.

Swedesboro-based Wellshire Farms, Inc. got its start in 1996, when Louis B. Colameco III became concerned that his children were eating over-processed meats, packed with chemicals and no health benefits or nutritional value. Colameco believed that in order to live well, his children must eat well. With that philosophy in mind, he set out to produce all natural meat products, free of antibiotics, growth hormones, and other artificial ingredients. Wellshire is a “green” operation, using everything from recycled paper products and specially designed solar panels for its home offices, to partnering with sustainable farms and processors to ensure the smallest footprint possible. The company employs 26 people, three of whom are family members, including Louis’ niece, goddaughter and sister-in-law. His daughter Jessica, a West Chester University graduate double majoring in accounting and marketing, serves the company as marketing director. Niece Christina Colameco serves as marketing specialist.