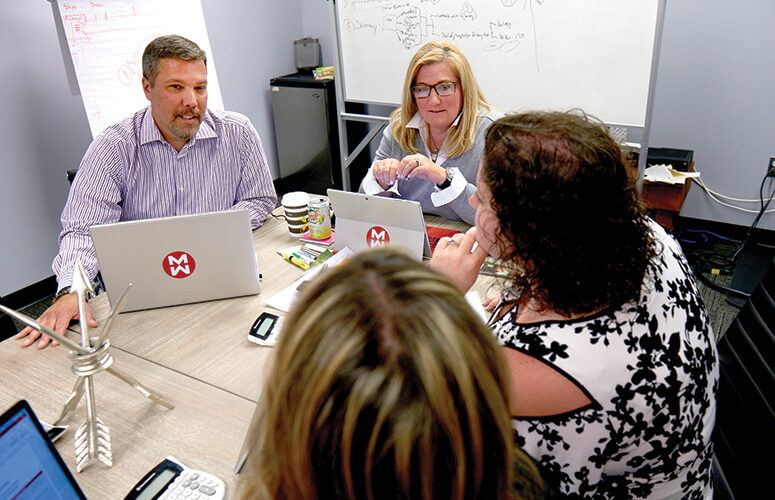 A Marketsmith team photo: Delivering on outcomes takes more than data, according to the agency. It takes the perfect chemistry of strategy, planning, and execution to deliver on a promise of performance.
High-Tech

As the pandemic drives a more digitally-enabled world, marketing technologies have their “eyes and ears” on you.

Though consumers largely remain at home behind screens, there’s one encouraging marketing trend Denise Blasevick says she is closely monitoring.

“There’s been an enormous surge of people discovering new brands,” Blasevick, CEO of The S3 Agency in Boonton, says. “People want variety, availability and less expensive options, so brands need to position themselves to be digitally discovered.”

What’s the best way to accomplish this? Data analytics that determine who the brand appeals to and where they appeal to them the most online, she says.

“Businesses that weren’t using data before have certainly learned they need to in order to survive now that everything is even more digital,” Blasevick says.

“We’re able to understand the consumer journey through data and use analytics to plan how we target consumers,” she says.

Data also now levels the playing field for both small and big businesses, with social media platforms such as Facebook and search engines such as Google providing free or inexpensive analytics tools for users.

“Anybody can get their hands on data – it’s what you do with it that counts,” he says.

Big Brother Not So Big?

While companies can, in fact, see when, where and how consumers have engaged with brands online, as well as a plethora of their demographic, geographic and psychographic data, it isn’t quite as “Big Brother” as it seems.

“This data is not used at an individual level – marketers can only see what our consumer base looks like,” Schulties says. “Because people today are bombarded with marketing, we use aggregate consumer data to ensure we are reaching consumers with relevant information, so that the copy resonates with you and the imagery is something you can relate to.”

For example, Marketsmith creates multilingual campaigns for the state of New Jersey using its own proprietary system called Marketsmith IQ, which integrates with more than 50 systems that pull data in, including Facebook, Google and LiveRamp.

“We use this type of data to gain an understanding of what people’s native languages are as well as what language they prefer to engage in,” Schulties says.

The DSM Group also uses a custom dashboard created with Google Data Studio to collect data from the search engine, the client’s website, and its social media accounts to market custom three-piece suits from a men’s haberdashery to those with incomes over $1 million.

“Social media has become all-consuming, but the data that you’re able to mine from it makes it easy to have a sniper-like approach to marketing,” Magarro says. “We can basically slice and dice something up to target an exact demographic audience.

“It makes it very easy to not only create campaigns, but also evolve with and optimize them as more data comes in,” he says.

It’s true that data collection is everywhere – and your phone really is listening, Schulties says.

“When you download apps, location and privacy settings determine whether or not an app is always listening,” she says. “If you talk about a product and you start seeing ads, it’s because your search is activated, meaning you didn’t close your browser and you have listening permissions set.”

In fact, there are multiple ways that companies obtain data from consumers – but it begins with the consumers themselves.

Zero-party data, for example, is information willingly provided by users to improve their experience, says Dave Alvarez, digital strategist at The S3 Agency.

“Facebook and other social platforms know a lot about you because of the information you put in, such as where you live and how old you are,” he says. “Then, based on their algorithms, they can infer data about you based on who your friends are.”

First-party data – which, according to Marketing Dive, is a 2021 priority for 88% of marketers – is collected directly from a company’s own audience via website visits, product reviews, social media accounts, e-mail marketing campaigns, and more.

“Since the buying public has moved much more online, there’s this influx of consumers entering sales funnels by signing up for databases because they saw an ad, researched a product, or received an e-mail,” Alvarez says.

From there, it moves further away from consumer control, with second-party data being first-party data that is shared between non-competitive partnerships, such as Amazon and Whole Foods, and third-party data being collected, aggregated and sold by entities that have no direct link to consumers, such as data analytics companies.

“However, since the Cambridge Analytica scandal, Facebook is just one example of a company that’s changed its policies,” Alvarez says. “You’re still able to say, ‘Okay, I want to build a community based off of people who visit my website and purchase this particular product, but Facebook won’t tell you what they know about them.”

Each level of data provides marketing firms with more cost-effective, proactive, and time-sensitive tools in which to reach consumers where they are.

“It used to be if you were Pepsi and you wanted to see how you would perform with 18- to 24-year-olds, you’d need to put together a focus group,” Alvarez says. “Now, you can just ask Facebook to market your product to 18- to 24-year-olds.”

Using “lookalike audiences” often saves brands money when deciding how certain demographics or psychographics might respond to products or services, he adds.

However, companies today don’t always know which demographics to target.

“They think they know what will happen, but there’s no real way of knowing because the world we’re living in is unpredictable,” Blasevick says. “So, there must be real-time monitoring, and we must think of every campaign as a test-and-learn to see what messages, images and graphics truly resonate with different audiences.”

“A lot of clients are now having to grapple with that,” Alvarez says. “They ask, what do you mean we need 10 versions of an ad? Well, if you appeal to both young mothers and college graduates, you still need to talk to these people differently.

“The data shows us that we need to think long and hard about how we message multiple groups of people,” Alvarez says.

Data also dictates where and how you’re going to reach your target demographics online, Schulties adds.

“For example, video engagement increased exponentially during the pandemic, which leads to sales four times better than any other type of advertising,” she says. “But I have also seen a rise and resurgence of chat bots, QR codes, and voice search with tools like Alexa, too,” she says.

All of this can lead to more efficient programmatic media buying by providing additional data that informs marketers how, when and where consumers interact online.

“For example, Instagram used to be famous for fashion, but now people are looking at coffee and willing to make purchases where they weren’t before due to the normalization of the digital marketplace,” Blasevick says.

So, with all this data swirling around, is consumer privacy officially dead?

No, Alvarez says. In fact, it’s getting stronger.

“It was the Wild West for a long time,” he says. “But now, a lot more consumer protections are being put in place.”

However, as laws continue to be enacted that allow consumers to take charge of their data, marketers’ access to it is constantly changing.

Even major players such as Google, Facebook, Amazon and Apple have begun limiting their plans and capabilities to share user data with advertisers.

And that, Alvarez says, is likely to be the biggest influence on data marketing this year.

“That changes the landscape in how we can market to people,” he says. “‘What do we know today’ versus ‘what will we know tomorrow?’”

Fire Up Your Brand with Today’s Hot Technologies