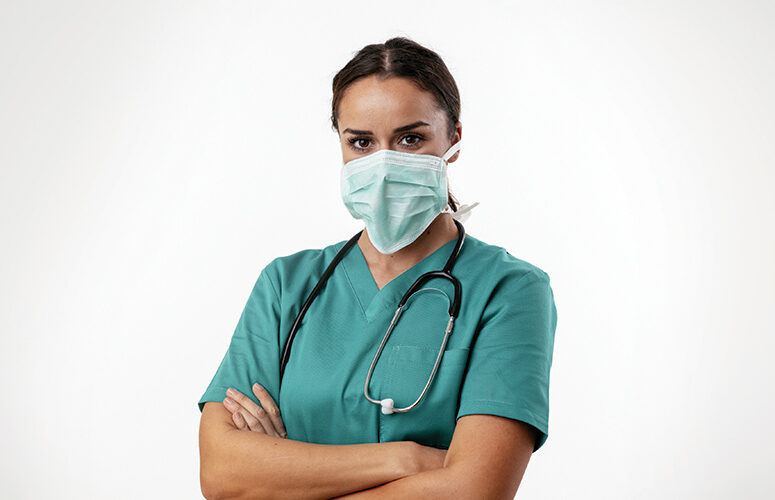 In the spring of 2020, while New Jersey’s COVID-19 cases were skyrocketing and the number of hospitalizations were reaching peak figures, a rapidly growing need became increasingly apparent: the state needed more healthcare workers to keep up with the pressure of the pandemic.

While additional certified healthcare workers aren’t exactly readily available in large quantities waiting on the sidelines to help during a global pandemic, two of the state’s biggest attributes coalesced into one of the solutions to this healthcare worker shortage.

New Jersey, dubbed the “Medicine Chest of the World,” is home to some of the top healthcare institutions in the country, and also boasts a highly educated workforce and nationally lauded education system. In fact, in 2021, U.S. News & World Report ranked New Jersey the No. 1 state in the country for education and No. 4 in healthcare.

What better way to increase the number of healthcare workers in the state than to tap into an existing talent pool of quality students and recent graduates, and allow them to kickstart their careers and begin working in the state’s hospitals?

In May of 2020, Gov. Phil Murphy announced the emergency graduate licensure program, which allowed recent graduates of nursing, physician assistant, pharmacy and respiratory care therapy programs, who had not yet been able to take and pass their licensing exams, to be granted temporary emergency licenses to expedite their ability to contribute and help fight the COVID-19 pandemic.

“From the onset of this crisis, our goal has been to eliminate any roadblocks that prevent qualified healthcare professionals from joining our frontline response efforts,” Murphy explains.

“We cannot afford to have otherwise qualified healthcare professionals sidelined during the COVID-19 crisis waiting for an opportunity to take the exams they need to become licensed,” adds Attorney General Gurbir Grewal. “We need them in the field as soon as possible to assist those who have been working around the clock to stop this pandemic.”

From Emergency License to Registered Nurse

Dolly Allen, RN, MSN, CCRN, C-ELBW, is manager of the Neonatal Intensive Care Unit (NICU) at The Children’s Hospital at Saint Peter’s University Hospital, and worked with a number of new graduates who benefited from the governor’s emergency licensure program.

Allen says that after completing a 12-week orientation with expert-level registered nurses, the graduates became direct caregivers for infants in the NICU.

“This program enabled new graduates with emergency licenses to work in the NICU, initially in the role of patient care technicians,” she says. “My new employees who remain on staff are now in the role of professional nurses. They have been key in managing patient care needs.”

Ashley Lopez, who went to nursing school at Rutgers University-Newark, received her emergency license in May of 2020, which allowed her to work in the NICU, learning the ins and outs of the unit. She received her official license in August, and is now a Registered Nurse in the NICU at Saint Peter’s University Hospital.

Her role included direct patient care, as well as working with a multidisciplinary team which included neonatologists, a social worker, a respiratory therapist, a nutritionist and a lactation consultant to formulate a plan for the patient’s care while also providing comfort to the baby and family.

“I have known since I was a young girl that I wanted to help people, so being able to obtain an emergency license and begin working as a nurse allowed me to do that more quickly,” Lopez tells New Jersey Business.

She says that the biggest thing she learned while working in the hospital during the pandemic was to be adaptable.

“Policies were changing as everyone was learning more about COVID-19, so the staff had to be adaptable and receptive to those changes in order to make sure that we were being safe, as well as keeping our patients and their families safe,” Lopez recalls.

Additionally, she says that the staff also had to learn to be creative and think of new ways to keep families and parents involved with their babies while still adhering to safety guidelines. This led to the implementation of providing FaceTime updates every shift to make sure parents stay informed about their baby even if they are not physically there.

“This has been an incredible experience for our new graduates,” Allen says. “They have been able to establish roots in a high specialty hospital and gain direct experiences from nurses who have been in the field for 20 to 40 years. It’s an incredible partnership between the universities and hospitals, and bridging the gap between novice- and expert-level care for NICU infants has been seamless.”

According to the governor’s office, the emergency licensure program will continue until the conclusion of the COVID-19 state of emergency and public health emergency.

In the same vein, Rutgers University announced in March 2020 that it would be expediting the graduation of 192 final-year students from the Rutgers New Jersey Medical School (NJMS) in an effort to allow them to be eligible to begin their residencies early, in order to more quickly join the battle against the pandemic.

“I received a phone call from the executive vice dean of NJMS who informed me about the situation at University Hospital in Newark (UH),” says Jorge Naranjo, one of the physicians who graduated early from NJMS. “She asked whether I would be willing to start my residency early to help the community and UH.”

Naranjo, now a resident at Rutgers Biomedical and Health Sciences (RBHS) who is training at UH, says that he served on a team created to focus on patients with COVID-19.

“I knew I was going into the front lines of the pandemic, but didn’t know how much would change over the next year,” he says. “I just knew that we were there to help others and to try to do the best for the patients and team members who needed us.”

Naranjo says that it was the speed at which a patient could take a turn for the worst that was the most difficult part of the experience.

“[There were] situations where a patient seemed medically stable in the morning, but then was doing much worse at the end of the day. You learned to take it one day at a time, one step at a time,” Naranjo says. “Residents were reassigned from other specialties to help with the patient surge we were experiencing. Resources were available, but there were so many COVID-19 cases and all were very critical.”