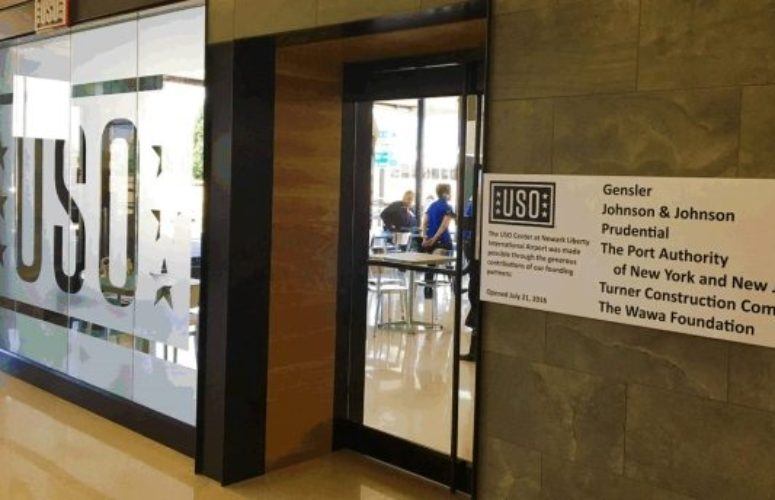 Thanks to a generous donation of space from the Port Authority of New York and New Jersey, the new center is located in Terminal B, Level 2. The 2,000-square-foot space is easily accessible from all airport terminals and will offer traditional amenities of a home-away-from-home USO center.  The location will give the thousands of service members and their families who reside in New Jersey or pass through Newark Airport a warm and comforting place to connect with loved ones via Internet or telephone, play a video game, catch a movie, utilize baby changing stations, have a cup of coffee and a snack or just put their feet up and relax.

“The Port Authority is honored to support all members of the U.S. armed forces and their families by being able to provide a home for this new USO center at Newark Liberty International Airport,” said Port Authority Aviation Director Thomas L. Bosco, a veteran of the U.S. Army who served in Operation Desert Shield/Storm and a recipient of the Bronze Star for meritorious service in the combat zone. “Our contribution reflects our profound gratitude for the immeasurable sacrifices made by our military men and women and their families to protect our freedom. I thank all the partners whose support made this USO center possible. God bless our troops.”

The USO’s mission is to strengthen America’s military service members by keeping them connected to family, home and country, throughout their service to the nation. While the USO has been serving the Tristate area on and off since as far back as WWII, they will now be able to carry on that mission permanently at their location at Newark Airport and be able to better serve all branches – Active Duty, National Guard and Reserve – throughout the area.

“We’re thrilled to be able to provide a home-away-from home for service members and their families here at Newark Liberty International Airport,” said USO of Metropolitan New York President & CEO, Brian Whiting.  “We are incredibly grateful to all of our founding partners for their commitment to funding this center and helping to provide a full breadth of programming at this facility.”

Founding sponsors for the new center include Prudential Financial Inc., which gave an unprecedented gift of $1 million in support of this project, Johnson & Johnson, Gensler, Turner Construction Company, and Wawa.

“The USO plays an important role in the lives of military service members and their families around the world. All of us at Prudential are honored to help bring the USO to Newark Liberty International Airport, making its services available to even more people,” said Prudential Chairman and CEO John Strangfeld. “Providing a comfortable place to relax and recharge during travel is one more way we can thank the members of our military and their families for their service and sacrifice.”

As the Official Healthcare Partner of the USO, Johnson & Johnson was instrumental in the development of the USO center, especially for the children’s area.

“We are very thankful for our servicemen and women, who sacrifice so much for us every day,” said Courtney Billington, Vice President, Janssen Supply Chain, and Executive Sponsor of the Johnson & Johnson Veterans Leadership Council. “Our hope is that this USO Center, like others around the world, will provide them with a safe, comfortable place for them to rest, connect with their loved ones, or be greeted by friendly and caring volunteers.”

The USO operates more than 180 locations worldwide with a presence on military installations, in airports, as well as remote forward operating bases in Southwest Asia.  Last year, USO locations worldwide were visited nearly seven million times by service members and their families. While no two locations are alike, every center provides a home-like environment, the ability to connect with loved ones via internet and phone, refreshments and snacks and most importantly, volunteers and staff who provide a heartfelt and warm welcome.

“There is a nature of military life that separates them from the general public,” said J.D. Crouch II, CEO and President of the USO. “For 75 years, the USO has been keeping them connected to ease that separation. When your separated from your family, you want something like this. This is a little taste of home with comfort and familiarity.”

New Jersey Acting Governor Kim Guadagno, a key speaker at the the ribbon-cutting ceremony, happens to have a son who is in the military. Guadagno said, in part, “All this time, I thought you invited me as the Acting Governor, and now I know you invited me so I [would] have a place to stay tomorrow night (Friday, July 22), as I got on an airplane to go visit my active-duty son … and I will be using this facility … I will report back to all of you to see how well it works … First, as the Acting Governor of New Jersey, I want to say thank you to all of those that made [the facility] possible.”

Ribbon Cutting for the Beacon in Jersey City