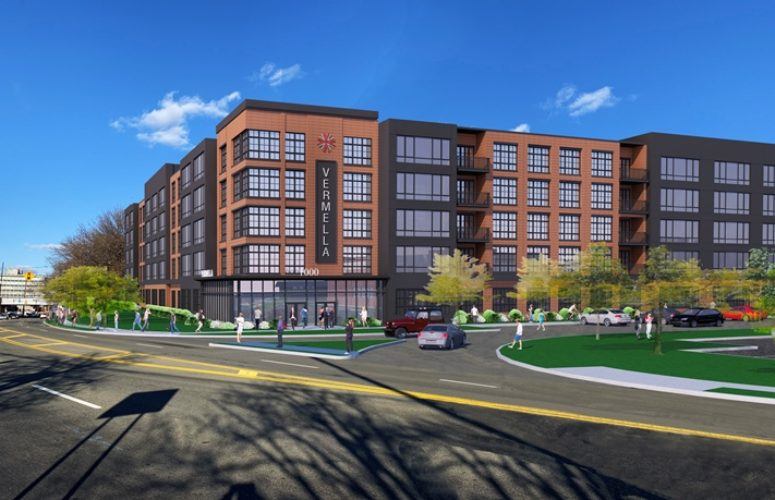 A rendering of The Record site redevelopment project.
Real Estate

The Record’s Former Site to be Developed into Residential Center

The former site of The Record at 150 River Street in Hackensack is Russo Development’s first Opportunity Zone investment, and the latest addition to a residential portfolio focusing on the conversion of former industrial sites into centerpiece residential communities.

The partnership among Russo Development, The Hampshire Companies and the Borg Family’s Fourth Edition Inc. will redevelop the 19.78-acre site into 650 apartments and 18,000 square feet of retail. The property, bordered by the Hackensack River, was integrated into the City of Hackensack’s redevelopment plan in 2012.

“Taking a long-term approach to an asset that has been in our family for generations, was the right move, and we wanted to have a role in shaping its future use,” said Stephen Borg, President of Fourth Edition, whose family has owned the property since the 1940’s. “Jon Hanson helped us partner with Ed Russo, who impressed us with his track record and long-term approach. We were very comforted that, like we do, Ed and Jon have deep roots in Hackensack.”

“It’s thrilling to work with our partners and City leadership to shepherd in the next phase of Hackensack’s incredible redevelopment story,” said Edward Russo, CEO of Russo Development. “As a designated redevelopment zone within an Opportunity Zone, The Record site is a perfect storm for creating economic growth and development in an area of the State which needs both.”

Similiar to Russo’s projects in Union, Kearny and Harrison, The Record site’s location is near major roadways —  in this case between Route 4 and Interstate 80 — and a public bus terminal. These benefits make the location ideal for Russo to expand its multi-family portfolio, which includes more than 1,500 rental units completed since 2015 and more than 3,500 units planned for various New Jersey communities in the next five years.

“Extending back almost 100 years, Hampshire’s roots have always been firmly planted in Hackensack,” said James E. Hanson II, President & CEO of The Hampshire Companies. “We are proud to invest in the next chapter of Hackensack’s vibrant history as we look to create a transformative project that will support the continued success of the City’s resurgence.”

Hackensack is one of 169 census tracts zones in 75 New Jersey municipalities designated as Opportunity Zones as part of the federal Tax Cuts and Jobs Act of 2017.  The Opportunity Zone program is designed to spur economic development by providing preferential tax treatment for real estate investments in areas deemed as Qualified Opportunity Zones in all 50 states.

Since the Opportunity Zone program’s launch last year, The Hampshire Companies has leveraged their business and investment acumen to identify strategic sites within identified Opportunity Zones in the northeast for future development. In late 2018, Hampshire acquired the former Arena Diner site at 250 Essex Street in Hackensac and is currently in the midst of a redeveloping the .69-acre  site. Hampshire’s partnership in 150 River Street marks their second investment in Hackensack under the federal program and third Opportunity Zone investment with several other projects in the pipeline.

With the demolition of the former Record buildings in its final stages, construction of the multi-phase project will commence this summer.  The first phase includes 272 apartments and features amenities that include a pool with an active courtyard, fitness center, rooftop deck, work-from-home center and spaces for private events.

Hollister Commences The Redevelopment of Two Properties in Downtown Hackensack