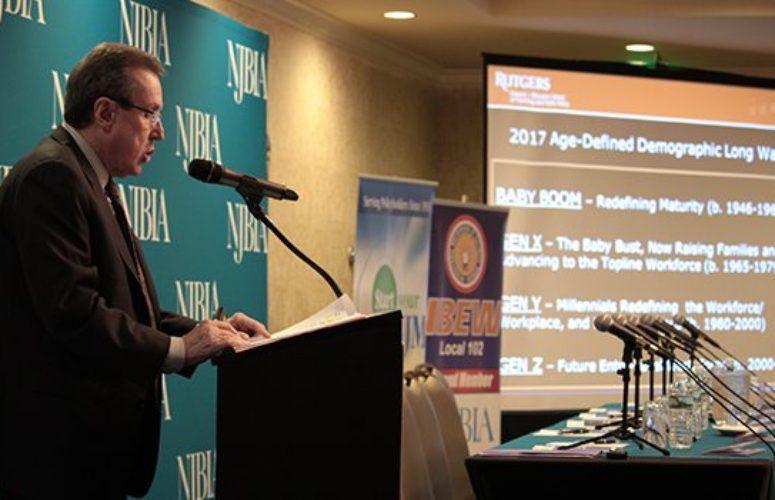 People born between between the early 1980s and the year 1999 comprise the Millennial Generation, and they are having a breathtaking impact on New Jersey against the backdrop of an evolving economy. NJBIA President and CEO Michele Siekerka asked the audience at NJBIA’s “The Education Equation” event, held in East Windsor, “Why are [Millennials] the No. 1 outmigration group from the state of New Jersey?  [And] who are the Millennials? Depending on who you talk to, you might get some different stories. Our research has told us that Millennials are those aged 18 to 34.  They are absolutely our future workforce in the state of New Jersey, and, therefore, they are a significant asset to us, and one that we must mine, and make sure that we are developing, so that we have a future workforce here in New Jersey.”

Hughes said Millennials desire “live, work, play” geographical environments that include mass transit, for example. Separately, they also want workplaces that might be described as more collaborative and interactive, with fewer solo offices. Hughes explained, “If you don’t provide this full range of work environments today, you are guaranteed labor shortages, tomorrow.”

He added that Millennials’ movements across New Jersey can be described as “sprawl withdrawal,” since they are leaving the outer suburbs for Hudson County, Brooklyn or New York City.  He also highlighted that while Baby Boomers years ago fled Jersey City for the suburbs, Millennials are now flocking to this locale.

Concurrently, New Jersey’s high-priced housing market has many Millennials who remain in the state, living with their parents. Hughes noted that across the entire United States, “34 percent of 18- to 34-year-olds are still resident in the parental home; slightly more than one third. In New Jersey, 47 percent still live with their parents.  New Jersey actually ranks No. 1 among the states.”

NJBIA’s Siekerka had similar sentiments, saying, “We have an affordability issue in New Jersey, and at the end of the day, we know that affordability is part of what is driving New Jersey’s Millennials out of the state.”

In terms of commercial real estate, Hughes said, “Corporate America, once fleeing urban America, now is following wherever Millennials lead them. [There is a] contracting suburban office footprint, and there is centralized employment growth, mostly in ‘live, work, play environments.”  Hughes showcased that Merck’s massive headquarters in Whitehouse Station – now closed – was opened at great expense and fanfare in 1992.  Similarly, BASF’s mammoth Mount Olive offices – opened in 1993 – are also closed.

Millennials are not completely behind these changes, but – in broad terms – New Jersey for decades (until 2004) was outpacing New York City in job growth. Since 2004, New York has been greatly outpacing job growth in New Jersey.

NJBIA’s event is nearing its conclusion today, and more coverage tomorrow will focus on “Ending the Millennial Exodus from New Jersey.”

Overall, Siekerka said, “We invest, on average, $19,000 [annually] per pupil, times 13 … in order to have those Millennials come to a high school graduation.  What happens at that point?  Approximately 60 percent who are going on to college do so outside the state of New Jersey.  Now, just pause for a second and think about that. Think about that investment we have made, K-12, to allow 60 percent of that important asset to leave the state of New Jersey.”

Report: A New Shift Toward Suburbanization?