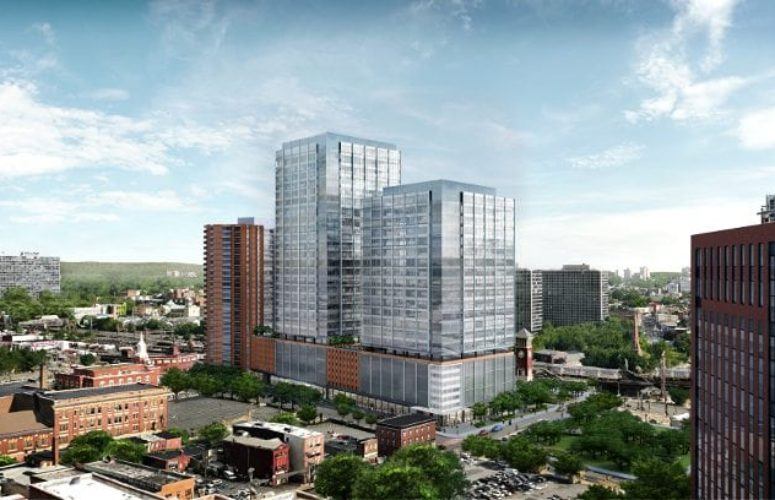 Newark’s transformation into one of the region’s foremost business hubs took a notable step forward with a recent announcement that SJP Properties has created a joint-venture with Aetna Realty of New York City to redevelop the former Westinghouse property. The 3.7-acre site, situated immediately adjacent to the Newark Broad Street Station, represents the most significant transit-oriented redevelopment opportunity in Newark, poised to further catalyze growth in the city’s burgeoning North Broad Street District.

Conceptual plans for the property call for up to two million square feet of mixed-use development, to potentially include office, retail, hotel and residential components. The development will be anchored by a large public plaza that will activate the pedestrian experience along University Avenue and Orange Street while enhancing connectivity to the train station, an NJ Transit commuter and light rail station that provides convenient Midtown direct service.

Stated Newark Mayor Ras J. Baraka, “Creating ‘transit villages’ around both of our train stations is a high priority for my administration. This strategy increases public transportation ridership, reduces automobile air pollution, and creates more affordable housing and vital new neighborhoods. Redevelopment of the former Westinghouse site accomplishes these goals. It will accelerate the momentum underway with development around the Broad Street Station and be an important part of the smart development propelling Newark’s attraction as a national business hub.”

SJP and Aetna have tapped the New York City office of global architecture and planning firm Gensler to design the development. Leveraging the site’s premier transit and vehicular accessibility, as well as its proximity to NJIT, Rutgers University and Newark’s extensive hospital network, the redevelopment has the potential to accelerate the North Broad Street District’s transformation into a tech and business corridor, anchored by such companies as Audibe.com, IDT, Cablevision and Genova Burns.

“Under the leadership of Mayor Baraka, Newark has definitively established itself as a city on the rise, with a growing number of corporations realizing that Newark offers exceptional access to a highly skilled workforce, and accessibility via a robust public transit network and direct access to the I280 corridor,” stated Steven J. Pozycki, CEO of SJP Properties. “This redevelopment site presents a unique opportunity for companies looking to position themselves within the booming North Broad Street District, directly across the Midtown direct train line and among the numerous cultural, educational and retail opportunities that downtown Newark has to offer.”

Over the past several years, Newark has witnessed a renaissance, with a number of developments attracting retailers, corporate tenants and residents that are injecting vitality into the city’s business district. Notable projects include the new state-of-the-art headquarters for Prudential Financial and Panasonic Corporation of North America, both developed by SJP Properties; the repositioning of the Hahne’s Department Store across from Military park into a mixed-use development with a Whole Foods and new restaurant by celebrity chef Marcus Samuelsson; the mixed-use Teacher’s Village project; and the new luxury apartment tower, One Theater Square, adjacent to the New Jersey Performing Arts Center (NJPAC).

“We have long recognized the redevelopment potential of the former Westinghouse site, and saw SJP Properties as the ideal partner to deliver a world-class development that will attract the right mix of high-quality tenants to this area of downtown Newark,” stated David Braka of Aetna Realty. “This property’s exceptional transit-oriented location positions it as one of the best development opportunities in a city currently experiencing an unprecedented revitalization.”

In addition to the city’s extensive train network – including Amtrak, NJ Transit and PATH services – downtown Newark is 10 minutes from Newark Liberty International Airport and is home to the nation’s third-largest seaport.

The city’s appeal as a hub for corporations is further enhanced by its offering of one of the most extensive dark fiber networks in the world, ensuring the fastest internet connectivity for companies that locate within the Brick City. The city’s half-dozen colleges and universities educate more than 60,000 students and contribute to the creation of one of the region’s largest and most diverse talent pools. Today, Newark is home to 21 Fortune 500 companies across an array of industries, including finance, media, technology, consumer products, insurance and fashion.

HFF Closes the Largest Land Sale in New Jersey During 2014