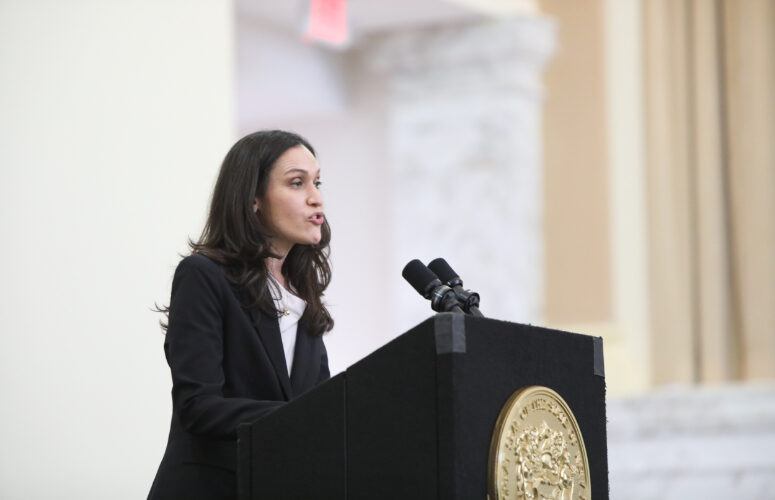 Rachel Wainer Apter to be Nominated to NJ Supreme Court

Gov. Phil Murphy today announced that he intends to nominate Rachel Wainer Apter, 40, to the New Jersey Supreme Court. She will replace Associate Justice Jaynee LaVecchia, who is slated to retire at the end of the current court term in August.

“Rachel has been unanimously recommended by my Judicial Advisory Panel, whose membership includes two former Chief Justices,” Murphy said during an announcement this morning at Ruth Bader Ginsburg Hall at Rutgers–Newark. “Pending her review by the New Jersey State Bar Association Judicial and Prosecutorial Appointments Committee, I will formally send her nomination to the State Senate for their advice and consent.”

Pening those approvals and formal nomination from the governor, Wainer Apter would become the 41st justice to serve on New Jersey’s Supreme Court.

She currently serves as director of the New Jersey Division on Civil Rights, and previously served as counsel to the State Attorney General, advising on civil rights and immigration matters, including leading the New Jersey team that defeated a motion by seven other states to end Deferred Action for Childhood Arrivals (DACA).

“Serving on the New Jersey Supreme Court is the most important trust that can be placed in a lawyer in this state,” Wainer Apter said. “The cases that the Supreme Court hears concern issues of fundamental importance to the state and to all of us as individuals, including how our society will live up to the promise of equal justice under the law.”

“Two values that I both admired about and shared with Justice Ginsburg [were] a central belief in the equality and dignity of all people – that everyone should be able to dream, to achieve, and to set the course of their own lives without barriers based on race, religion, nationality or ethnicity, gender identity, sexual orientation, or disability,” Wainer Apter said. “The second is a belief in the importance of the law not simply as a subject to be debated, but as something that profoundly impacts the lives of individual people each day.”

She added that a large part of her professional career has focused on addressing systemic inequality. At the American Civil Liberties Union (ACLU), Wainer Apter worked on major civil rights and constitutional cases to defend anti-discrimination laws, protect the right to vote, and safeguard the constitutional rights of people accused of crimes.

“While counsel to the Attorney General, I worked with stakeholders to draft the Immigrant Trust Directive, which curtails the involvement of New Jersey law enforcement officers in federal civil immigration enforcement,” Wainer Apter said. “And at the Division on Civil Rights, I have worked to broaden the New Jersey Law Against Discrimination, combat sexual harassment and the rise in hate and bias, and tackle systemic racism.”

Brian G. Paul Recognized as 2018 Lawyer of the Year by Best Lawyers in America