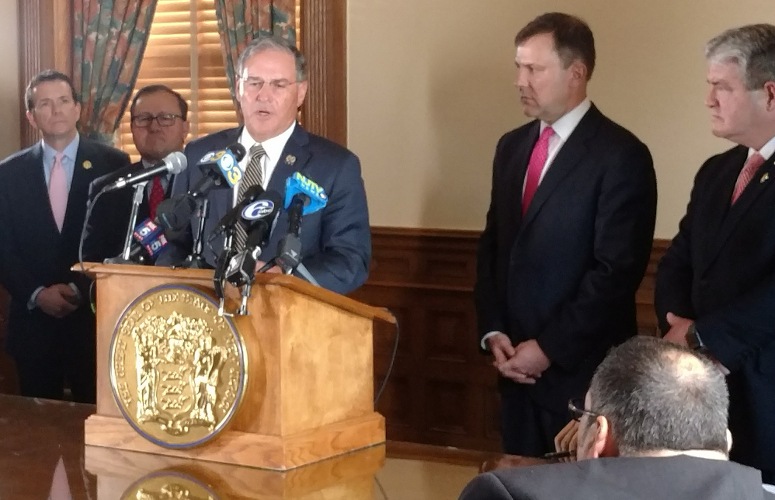 Public- and private-sector leaders in New Jersey viewed Gov. Phil Murphy’s FY 2020 budget proposal yesterday with praise, caution and criticism as the negotiations now get underway between Republicans and Democrats in the State Legislature on a variety of proposed budget expenditures, savings, revenues and taxes.

Murphy proposed a $38.6 billion budget yesterday, an increase of $1.2 billion from FY 2019. It also includes a projected surplus of $1.16 billion and savings of $1.1 billion.  The savings come from $800 million cost reductions in public employee healthcare benefits and some $200 million in departmental savings.

One of the main criticisms of the budget was the amount of spending it increases.

According to Michele Siekerka, president and CEO of the New Jersey Business & Industry Association, “We appreciate the Governor’s efforts to offer significant healthcare savings in this budget, as we and others have advocated, to bring more fiscal responsibility to our state. However, the proposed budget also adds nearly an equal amount of spending. It increases New Jersey’s overall budget by 3.2 percent compared to last fiscal year and 11.2 percent from FY 2018. Further, this budget proposal will continue the path of ever-increasing, long-term debt obligation. This obligation has grown 382 percent over the past 10 years while revenues have only grown 23 percent.”

“Lowering the threshold for the top gross income tax rate will continue to encourage the outmigration of wealth from the state,” Siekerka said. “New Jersey has a net loss of nearly $25 billion in adjusted gross income over the last 12 years of available data. This will continue if more individuals have to pay a top income tax rate, which ranks as the third highest in the nation and the highest in our region.”

Meanwhile, former Governor Jon Corzine, who was in the Assembly Chamber while the budget address was being given, told New Jersey Business, “It seems as if Governor Murphy is being fiscally disciplined and responsible. The things he is talking about regarding healthcare savings are smart.”

When asked about the extra $1.2 billion in additional spending, Corzine responded, “It’s due to the [pension obligation.]” Murphy’s budget proposal calls for a $3.8 billion payment into the state workers’ pension system. “Because of that, “Corzine continued, “you are going to naturally increase the budget. … I know that story. … But we’ve signed contracts and good business people know that when you sign contracts, you have to live up to them.”

Also in the audience was former Governor and current State Senator Richard Codey, who commented after the address that the negotiations process will be long, but compromises will be made. He said this is important because the state is looking for “zero credit downgrades” by ratings agencies, adding that, for the past eight years, the end result of each budget was downgrades from Wall Street.

Aisha Glover, president and CEO of the Newark Alliance, the nonprofit organization dedicated to the ongoing economic revitalization of the state’s largest city, told New Jersey Business said she was happy to hear about the focus on women’s health issues, such as addressing the mortality rates of women and children during childbirth, “particularly for women of color, which is high in urban areas like Newark,” Glover pointed out.

Immediately after the budget address, State House Republican leaders held a news conference within the capitol building where the issue of tax incentives also came up.

Assembly Republican Leader Jon Bramnick, discussing the supposed $11 billion that state taxpayers are allegedly on the hook for as the state will award this amount in tax incentives over the next few years, said all company “CEOs must certify that their companies have met all [job creation] requirements before those [tax] benefits are given. These are not giveaways; these are tied to job creation.”

What the governor did not address, Bramnick continued, is that the state “spends too much and taxes too much.”

Senate Republican Leader Tom Kean, Jr. added that incentives have been offered with frequency because “we have such an unstable tax rate. Incentives happen because the income tax goes wildly across the board. Last year, the governor tried to increase the sales tax, increased the income tax and other taxes … the increases over time are monumental. That type of instability causes individuals to say, ‘I am going to move my company to Pennsylvania, Virginia or other states down south or out west.’ If we had a more stable and predictable tax and spending climate, the need for tax incentives would be less.”

Sen. Steven Oroho, Senate Republican budget officer, added, “New Jersey has an uncompetitive tax profile. We rank at the bottom in regards to the income tax, sales tax, corporate tax … with all of these taxes, it’s no wonder we have all of these incentives just to get [businesses] to sit at the table and talk to us.”

Overall, he said, “What we heard in today’s budget address was just the surface. We will be digging in to see what is real.”