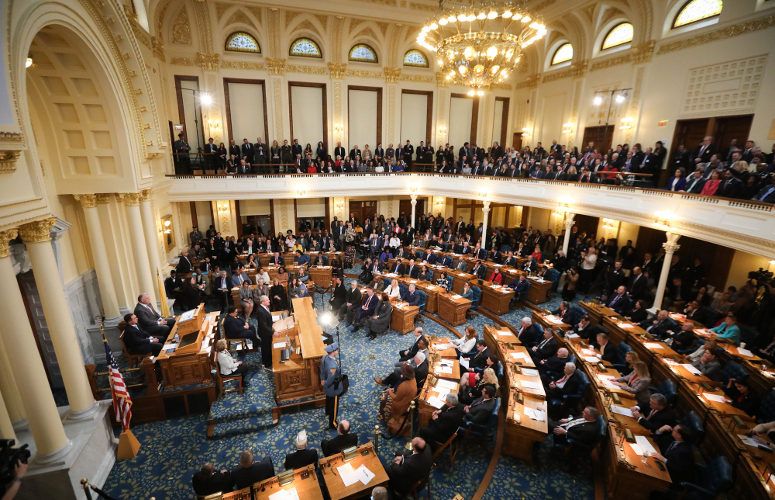 New Jersey politicians are giving Gov. Phil Murphy’s $41-billion 2021 budget proposal reviews that fall in line with their respective party platforms. Democrats interviewed in the halls of the Trenton State House after yesterday’s budget address praised the governor for initiatives such as giving municipalities more money for K-12 education and expanding the millionaires tax by applying the top tax rate of 10.75% to all income over $1 million. These initiatives and more, according to Governor Murphy, will help deliver property tax relief.

Republicans, meanwhile, said the budget proposal is unsustainable and “old school” in that it calls for increased taxes and spending without streamlining government. They added that the change in the millionaires tax will further exacerbate outmigration and personal wealth fleeing the state.

The proposed budget is 5.7% or $2.2 billion larger than last year’s budget. The proposal represents a 17.9% increase from the last budget enacted under the Christie administration. The new proposal calls for nearly $1 billion in added taxes, while creating a surplus of $1.6 billion, and making an additional $300 million deposit into the state’s rainy day fund.

It also seeks a $794 million increase into the state’s public pension system for a total of $4.6 billion, while putting an additional $336.5 million toward the K-12 education formula, and an additional $83 million towards maintaining and expanding preschool education. The spending plan will also give an additional $132 million to NJ TRANSIT for a general fund subsidy of nearly $600 million.

On the levy side, besides the millionaires tax proposal, the budget seeks a Corporate Responsibility Fee from large corporations that do not provide healthcare benefits, or affordable benefits, which results in employees turning to Medicaid for assistance. The budget would also increase the cigarette tax from $2.70 to $4.35 per pack, generating some $215.8 million in new annual revenue.

Former Governor and State Senator Richard Codey (D-27), said the budget proposal was robust. “We have more money that we ever had, which is great for a governor, but the issue is not to spend it all. I don’t think Governor Murphy will. He is putting money into the right categories, such as school funding and property tax relief.”

Codey agrees with Governor Murphy when he says residents will not leave the state because the top tax rate may be applied to those earning $1 million. “I never thought you would just flee because of the tax. There are some people who may leave, but they will be replaced by thousands and thousands of others who say New Jersey is the best place to be because of its proximity to New York and its great schools,” Codey said.

Meanwhile, Senator Anthony M. Bucco (R-25) said people are “leaving the state in droves and it is no longer just retirees and no longer the wealthy. Our children who go off to college are not coming back. Millennials are leaving because they have no discretionary income while they are here. This is killing the middle class.”

On the overall budget, Bucco commented, “The thing that bothers me is that every aspect of tax relief the governor talked about in the budget is based on additional spending. You can’t get school tax relief or property tax relief by spending more. You can’t make New Jersey more affordable by spending 5.7% above last year’s budget.”

Assemblywoman BettyLou DeCroce (R-26), said that while the governor talked about property tax relief by giving more money back to the schools, she would like to see what schools will receive those monies. “If the governor is just going [to fund] the urban areas and not suburban areas, tax relief is not going to happen. This has to be broad-based; throughout the state for every property owner. If the governor is willing to spread the wealth, then we could talk,” she said, adding that she did not see all Democrats on the Assembly floor — those from suburban districts — standing up and clapping when the governor discussed school funding.

On the other side of the political aisle, Republican Assembly Leader Jon Bramnick commented, “Incentives? Let’s get them done,” as he feels the process is taking too long at a time when New Jersey is competing with other states for business. He said the governor’s “responsibility as chief of staff of this state is to get the incentives done, but he hasn’t.”

Governor Murphy said he is looking to cap incentives and prevent “millions of dollars from being spent without oversight and, too often, with no results,” adding that “billions given away in open-ended corporate tax breaks will be billions we will not have to make our state more affordable for both residents and businesses.”

This issue is all in response to last year’s state comptroller’s audit of the Economic Development Authority’s (EDA) which found that existing tax incentive programs claimed deficiencies in management and oversight.

On the technology and innovation front, Governor Murphy proposed tripling funding for the Commission on Science, Innovation and Technology to $3 million, among other endeavors. Assemblyman Andrew Zwicker, (D-16), who is chair of the Science, Innovation and Technology Committee, said he is looking forward to learning about the details the governor has unveiled and looks forward to going through the budget process with the Legislature. He added that his mission is to always focus on innovative companies that are the job creators of the future, saying he is most interested in identifying new ideas coming from the state’s research institutions and New Jersey entrepreneurs.

Finally, Senator Tom Kean Jr., (R-21), said there was “nothing in the governor’s speech that would attract families to New Jersey. The proposed budget is unsustainable. The message that came out today was more taxes, more spending, and less affordability over time.”