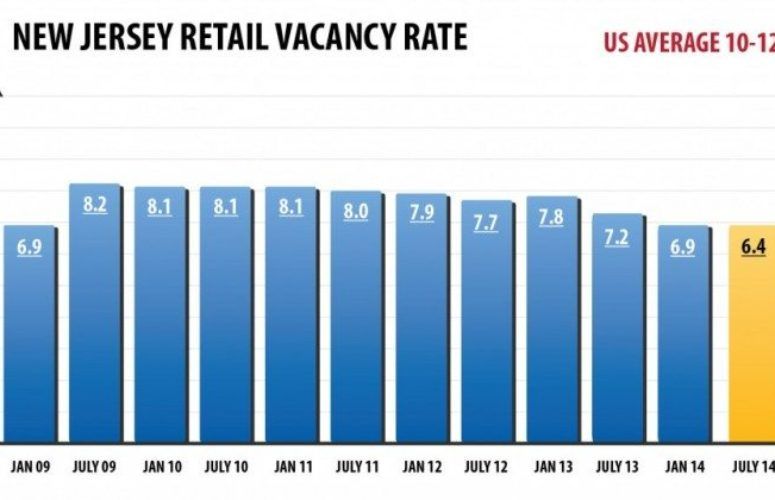 The retail vacancy rate is at its lowest for the first time in 5 years according to the results of The Goldstein Group’s mid-year survey of 22 retail corridors in Northern and Central New Jersey. The survey, totals over 4,250 properties and over 100 million square feet of retail space. The retail vacancy rate dropped to 6.38 percent, a sixth of a percentage point drop from the previous vacancy report in January 2014. Retailers – both existing and new, coming to New Jersey for the first time – continue to lease retail space at a strong pace. This continued improvement is especially significant considering the average retail vacancy rates across the country are still hovering in the 10% range.

“This is the lowest retail vacancy percentage we’ve seen in the Northern and Central New Jersey markets in over 5 years,” noted Chuck Lanyard, President of The Goldstein Group.

While the retail market continues to improve after the recession that hit in 2008 and 2009, we continue to see space become vacant due to closings throughout the state. Staples, Thomasville Furniture, Dots, Ashley Stewart, Brookstone, Family Dollar, Loehman’s, Mandee, Marty’s, Office Depot, Pearle Paint, Rent-a-Center, White Castle, Arby’s, and Crumbs have all closed or announced planned closings of locations.

Active Retailers in the Marketplace

The majority of leasing activity continues to be driven by retailers opening small stores in the under 5,000 s.f. range. However, this has been a substantial increase in big box retailers taking advantage of favorable market conditions and rental rates. Examples of this include Ashley Furniture in Green Brook, Costco in North Brunswick, Bob’s Discount Furniture in Freehold, Bloomingdale’s Furniture in Wayne, Big Lots in Ocean and North Bergen, BJ’S Wholesale Club in Howell, Aldi in Lodi, DSW in Livingston, Ethan Allen in Marlboro, Hobby Lobby in Howell, Phillipsburg, Totowa and Woodbridge, Nordstrom Rack in Livingston, Pet Supplies Plus in Rockaway and Wall, Petsmart in Edison, Price Rite Supermarket in Garfield, Target in North Brunswick, and Shop Rite in Howell, Belleville, Union and Wallington.

Many of the retailers we are so familiar with continue to expand their presence in New Jersey. Those who have recently opened locations or plan to open include: 7-Eleven in Toms River, AAA in East Brunswick and Ledgewood, Advance Auto in South Plainfield, Middletown and Parsippany, Dollar Tree in Elizabeth, CVS in Ocean, South Orange and West Orange, GNC in Union, Goodwill in Elmwood Park, Guitar Center in Ocean, Hand & Stone in Howell, Five Below in Howell, Investors Bank in Garfield, Massage Envy in Fair Lawn, QuickChek in Wayne and Ocean, Sally Beauty Supply in Howell, Staples in North Brunswick, Verizon in Fair Lawn and Marlboro, Vitamin Shoppe in Marlboro, Walgreens in Manchester and Wawa in Garfield, Lawrence and Howell.

The fast casual dining segment, which includes restaurants such as Panera Bread, Chipotle, Smash Burger, Noodles & Company, and Shake Shack will continue to expand throughout the state. People enjoy the fast service along with the much higher food quality and healthier food choices that fast casual provides in comparison to fast food, and as a result, fast casual dining is flourishing.

Medical tenants continue to open facilities in traditional retail spaces and shopping centers although we have seen this market start to hit a plateau compared to the steady increase we had seen in recent years. Med Express, PM Pediatrics, Doctors Express and City MD all have opened stores in the past year or are about to open stores in New Jersey as landlords have become more receptive to their tenancy than in the past.

“Though consumer confidence continues to improve, we still have a ways to go before the market returns back to its original healthy strength before the economic downturn that hit retailers in 2008.” noted Lanyard.  “We will still see cautious optimism on behalf of many national retailers in their plans to continue opening stores in New Jersey. However, fortunately New Jersey continues to be one of the most desired states for retailers due to its strong demographics. Things are really looking up for New Jersey as far as retail goes. 2014 has continued to shape up to be a great year for retail space being leased with desirable retail locations now reaching a new premium.”