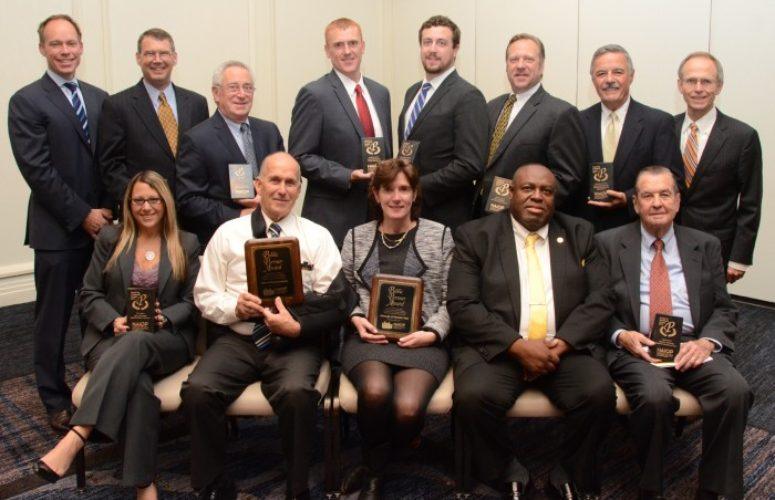 Leadership, advocacy, and career accomplishments in commercial real estate were at the forefront of NAIOP New Jersey’s Annual President’s Awards and Hall of Fame Dinner at the Meadowlands Hilton in East Rutherford. The event also marked the inaugural Public Partner Awards, honoring communities that have successfully encouraged economic development, and the presentation of the Frank Visceglia Memorial Scholarship.

“Tonight we recognize all of the contributions of our honorees, their years of volunteer service to this organization, their advocacy on key public policy issues, and their impact on this industry,” Michael McGuinness, CEO of the commercial real estate development association, told the nearly 300 attendees. “We also recognize the  communities of Hackensack and Florham Park for their accomplishments, flexibility, and willingness to partner with developers to encourage growth.”

“Volunteerism is what makes our association great,” said NAIOP New Jersey President Clark Machemer of The Rockefeller Group. “Each of tonight’s award recipients has helped shape and strengthen our Chapter, efforts that have made ours one of the most respected associations in New Jersey.”

“We wanted to recognize communities that are taking the initiative, being proactive in maintaining or expanding their local economies in order to attract and maintain jobs and improve the quality of life,” said McGuinness. “Both of our honorees have clearly met the criteria and then some, investing in infrastructure, soliciting input from local citizens, and being receptive to a business and development community that has their pulse on market trends. Our hope is that these communities will be recognized as ‘champions’ to be emulated by other communities.”

The City of Hackensack was honored for working collaboratively with local community and business professionals, providing opportunities for new mixed-use urban development that has promoted a pedestrian-friendly downtown. “It has been a pleasure to work through the system of redevelopment in Hackensack,” said Mayor John P. Labrosse, Jr. “It has been a true partnership of the city, the planners, and the developers.”

“It is always a team effort,” said City Manager David R. Troast. “It starts with the policy of the Mayor’s office, City Council approval, and then it becomes a matter of hiring the right planners and developers, and sticking with a plan. If there are major difficulties, it’s a matter of working through the issues to get it done. The bottom line is that the City Council has been bold enough to move forward with the plan, because timing is everything.”

Among the ingredients in the long-term plan for Hackensack has been the institution of a pre-application process, according to Deputy Mayor Kathleen Canestrino. “It is intended to streamline the process and bring it to fruition.”

The Borough of Florham Park was honored for their willingness, determination and ability to gauge market conditions, resulting in The Green at Florham Park, the master-planned redevelopment of the 268-acre former ExxonMobil Research Center site. The result is a mix of residential, hotel, retail and offices, with businesses now on-site ranging from BASF’s North American headquarters to the headquarters and training facility of the NFL’s New York Jets.

“Companies like The Rockefeller Group make great partners,” said Florham Park Borough Administrator William F. Huyler. “We were fortunate to have space to build out — a lot of communities don’t have that option. Rockefeller worked in immeasurable ways to make this redevelopment happen, doing a lot of great things and having the right chemistry to work with us as a great corporate partner.”

“Congratulations and thanks to all of the award winners for the examples they set, and to everyone else who contributes to the success of our organization and the commercial real estate industry,” said McGuinness.