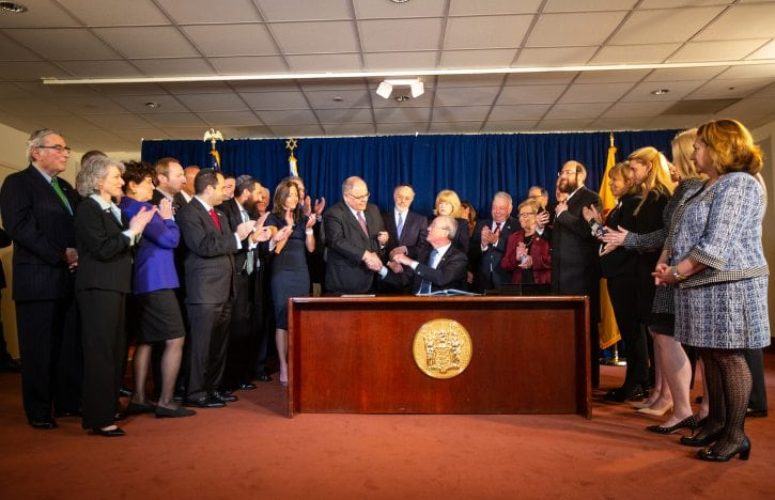 Commemorating the 70th anniversary of the establishment of the State of Israel, Gov. Phil Murphy signed a resolution recognizing the historic significance of the occasion, as well as the social, cultural and economic ties between New Jersey and Israel.

“For seven decades, the relationship between New Jersey and the State of Israel has fostered an unbreakable bond between our peoples,” said Governor Murphy. “Today, that connection has never been more important in developing key economic partnerships in areas from business and technology to education and medicine. I look forward to working with Ambassador Dayan to cultivate innovative opportunities to grow both our economies.”

“I am honored to join the state of New Jersey and Governor Phil Murphy today on the signing of a resolution marking the 70th anniversary of Israel. It is a great privilege and yet another milestone demonstrating the strong NJ-Israel alliance. New Jersey and Israel are not only similar in size and population, but are also linked economically and culturally,” said Ambassador Dayan. “On its 70th anniversary, Israel is a strong innovative leading country. It has never been more prosperous; economically and diplomatically. We have a bright future ahead and I look forward to strengthening and deepening the ties between both sides as part of this incredible alliance.”

“New Jersey has a long-standing relationship with Israel and a common bond rooted in cultural ties, shared democratic values and mutual respect,” said Senator James Beach.  “Recognizing the 70th anniversary of the establishment of the State of Israel honors that friendship and reaffirms our commitment to supporting and maintaining that relationship for years to come.”

“It is important to recognize on this historic day that Israel is a prime example of a successful democracy,” said Assemblywoman Nancy Pinkin. “The progress Israel has made in only 70 years is quite remarkable.”

“Governor Murphy’s resolution today is another powerful testament to his genuine friendship and commitment to the State and people of Israel, and continues to nurture and extend the longstanding and positive relationship between New Jersey and Israel,” said Rabbi Avi Richler, Executive Director of Chabad of Gloucester County. “I sincerely thank the Governor for his initiative to recognize this important milestone and I look forward to working with him to further advance the economic, cultural, educational and technological ties between our two great States.”

“On behalf of the NJ State Association of Jewish Federations, I gratefully acknowledge Governor Phil Murphy and the NJ State Legislature for standing side by side with the people of Israel in recognizing Israel’s seven decades of statehood, democracy, and accomplishments shared with and of significant benefit to the world,” said Jacob Toporek, executive director of the NJ State Association of Jewish Federations. “Additionally, we are thankful to Governor Murphy, who has unwaveringly supported, in deed and commitment, the NJ-Israel relationship, one in which we remain key trading partners and our economic futures are strongly linked. The Jewish community in New Jersey looks forward to partnering with Governor Murphy to strengthen even further the bonds that have long tied our people to one another.”

“We are pleased for the support of Israel shown by Governor Murphy and the NJ State Legislature in issuing a Proclamation to celebrate the 70th anniversary of the State of Israel,” said Gordon F. Haas, CEO/president of the Greater Elizabeth Chamber of Commerce. “Our Governor and our State have always been strong supporters of Israel and we look forward to growing that relationship now and in the future.”

Women, the Economy and Wage Disparity