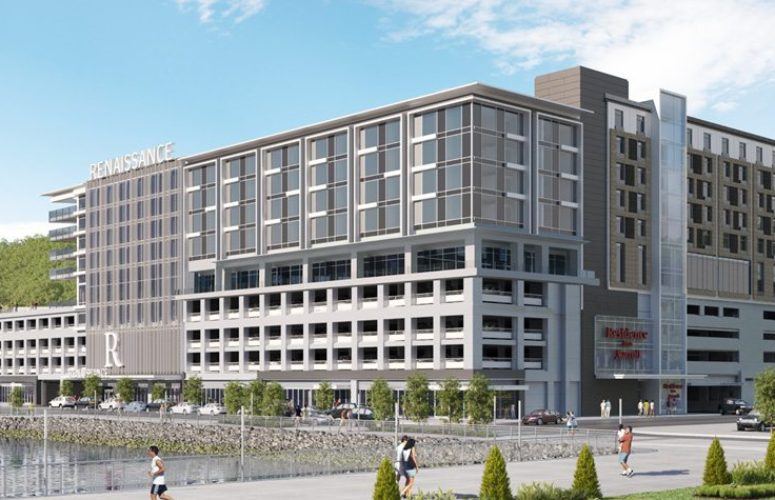 A rendering of the Port Imperial Hotel Project.

The project includes a full-service, 210-key Renaissance hotel and a 154-key Residence Inn. The complex will feature extensive meeting and function space for 450 guests and a 15,000-square-foot deck off the sixth floor sky lobby with unobstructed direct views of Midtown Manhattan. Once completed, this will represent the only Marriott branded full-service and extended-stay product along New Jersey’s Gold Coast.

“The boom of interest in the Weehawken waterfront is a testament to the appeal of urban mixed-use communities that offer superior transit options,” said Marshall Tycher, president of Roseland. “These hotels will be the signature amenity for Port Imperial and the entire waterfront, and will signal the continued growth of all sectors in this prime market.”

Roseland’s Port Imperial development spans two-and-a-half miles and includes a waterfront walkway with parks, providing recreation to visitors and residents. It is a vital part of parent company Mack-Cali’s recently announced three-year strategic plan to focus on high-end waterfront and transit-oriented properties. Roseland has transformed the urban site into a significant residential, commercial, and transportation center that is home to an inter-modal transportation hub with ferry, bus, and light rail service.

The Renaissance will be a full-service hotel with luxury guest rooms, a lounge, and breakfast space. The Residence Inn will cater to “extended stay” guests, typically those spending an average of four or five nights. It will feature guest rooms with 400+ square feet of space and a fully-equipped, en-suite kitchen, as well as free hot breakfast served daily.

The hotels will be built on top of the 850-space Port Imperial parking garage with 17,000 square feet of ground-level retail space next to the NY Waterway ferry terminal. Each hotel will have its own ground-level entrance and lobby, with a connection on the sixth floor to provide guests with shared access to the outdoor terrace, function space, pool, fitness center, and high-end restaurant.

“These hotels are a crowning achievement for the Port Imperial project and we are excited that it is moving forward,” said Richard Turner, mayor of Weehawken. “From permanent jobs to world-class amenities these hotels will provide lasting benefits for the people of Weehawken.”