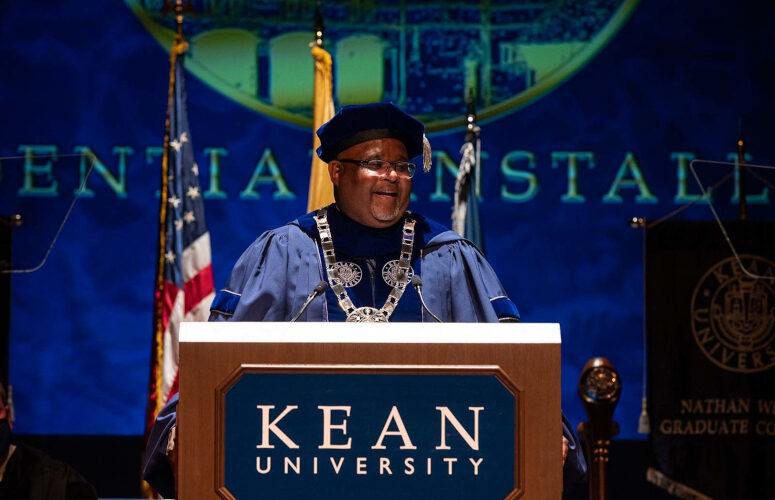 Kean University President Lamont O. Repollet, Ed.D., was installed as the 18th leader of the University in a campuswide ceremony attended by Kean faculty and students, state lawmakers, college and university presidents from across New Jersey, and family and friends.

“As I accept this appointment as president, I acknowledge, ‘To whom much is given, much will be required,'” he said.

“Building a positive climate and culture is what we’re all about,” he said. “As Kean emerges as the Urban Research University of New Jersey, I am committed to leveraging the resources of Kean University to contribute directly to solving our state’s most challenging social and economic challenges.”

Kean board of trustees Chair Steve Fastook ’06H welcomed the audience, which included the president’s wife, Darlene, and daughters, Lauryn and Taylor, and spoke about Repollet’s accomplishments.

“President Repollet is already moving this incredible University — this beautiful, state of the art, vibrant and diverse community — forward on its journey to excellence,” Fastook said.

Oliver spoke about Kean’s role as an inclusive, diverse university.

“Kean is the place that has sent people out in the world to do miraculous things,” she said.

Since taking office, he has focused on safety, academic excellence and equity, including health and safety measures to curtail the spread of COVID-19. He has created programs to increase equity, spearheaded a drive to pursue Carnegie R2 research designation, and established a student President’s Advisory Council and Student Town Halls.

Repollet earned his bachelor’s degree in communication from The College of New Jersey, his master’s in educational leadership at Kean, and a doctorate in education from Nova Southeastern University.