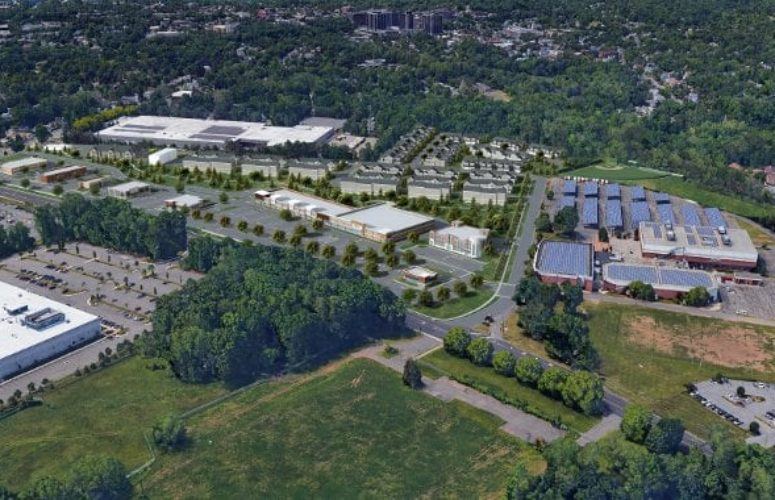 JMF Properties, a Whippany-based development and management firm, announced that it has been designated the redeveloper of the former Colgate-Palmolive industrial campus on East Hanover Avenue straddling Morris Township and Morristown.

Both residential and retail uses are planned for the 64-acre site, including a 150,000 square-foot shopping center, 143 townhomes, and 60 rental units. JMF acquired the property from Colgate-Palmolive and submitted a redevelopment proposal to municipal officials. The company has been granted final site approval for the project.

Colgate-Palmolive announced in 2013 that it planned to sell its Morris Township facility by 2016 after occupying the property for more than 60 years where it produced a number of products, including liquid hand soap.  As a business with strong ties to the Morris County community, the company wanted to leave the property in good hands. With a number of national firms submitting proposals, Colgate-Palmolive chose JMF, in large measure, because of the developer’s balanced approach to providing for the community’s retail and housing needs. Moreover, as a local developer with significant redevelopment experience, JMF had the ability to see the project through to completion.

“As the owner of a very large parcel with potential impact on multiple towns, Colgate-Palmolive required a developer with extensive knowledge of the municipalities affected by the development,” said Robert W. Dietz, VP, Global Facilities for Colgate-Palmolive Company. “Additionally, it was critical to identify a developer with experience in building residential and commercial real estate, and one that had a thorough understanding of the redevelopment process.”

Following its blessing by Colgate-Palmolive, JMF immediately got to work on securing the required approvals.

“As a result of the decision to select JMF Properties, an approval process that might otherwise have taken more than two years was accomplished in less than 12 months,” Mr. Dietz added.

JMF has already razed all of the existing buildings on the property. The company has submitted for building permits and looks to break ground on both the residential and commercial portion of the development this spring.

“As a Morris County-based developer, we’re delighted to have secured such a well-located property with significant potential for both commercial and residential uses right here in our backyard,” said Joseph M. Forgione, the Founder and Principal of JMF Properties. “We have a real vision for this site, and look forward to working with Morris Township, Morristown and neighboring communities to deliver a project that will add to the vitality and financial stability of their towns for years to come.”

JMF is one of New Jersey’s most active developers, well known throughout the state for its redevelopment efforts, transit-oriented development, and prominent commercial and retail properties. In Morris County alone, JMF recently broke ground on Waterview Marketplace, a 150,000 square-foot shopping center on Waterview Boulevard in Parsippany that will be anchored by a Whole Foods Market, and announced the development of a 140,000 square-foot retail center on Hanover Avenue in Hanover Township, directly across from the Colgate-Palmolive property. JMF also opened Estling Village in 2016, a collection of 100 upscale townhome-style rental residences right next to the Denville train station, and Clarus Maplewood in 2017, a mixed-use project that is 100 percent leased. In the City of Bayonne, JMF Properties was designated as redeveloper of a portion of Military Ocean Terminal on the Hudson River waterfront, where more than 200,000 square feet of commercial space and 500 residential units are being constructed, including a 150,000 square-foot Costco wholesale club.

JMF currently has more than a dozen projects throughout the state in various stages of planning, construction and completion, including high-profile developments in Morris Plains, Glen Ridge, Bayonne, Maplewood, Sleepy Hollow, Raritan, Emerson and Berkeley Heights.