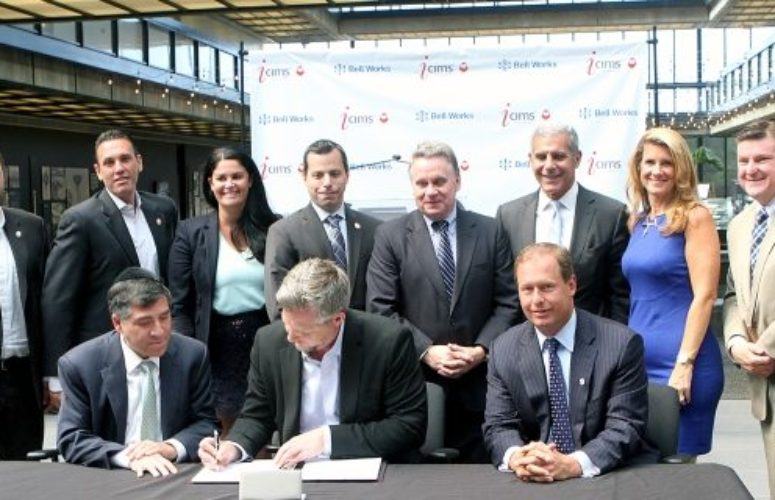 With leasing momentum rapidly accelerating at Bell Works, Somerset Development today announced that renowned technology company iCIMS, Inc. will serve as anchor commercial tenant at the iconic mixed-use development in Holmdel. A leading provider of human resources software, iCIMS signed a 350,000-square-foot lease at the property with an option to take additional space for future expansion.

The addition of iCIMS, which is relocating its headquarters, brings Bell Works to more than 50 percent leased less than two years after the historic two-million-square-foot property sat as one of the single largest vacant office buildings in the nation. Somerset is currently executing a $200-million adaptive reuse redevelopment, transforming the former Bell Labs facility into a dynamic “live-work-play” community.

“The continued success of Bell Works is essential to the strength of New Jersey’s job market,” said Lieutenant Governor Kim Guadagno. “Technology-driven companies like iCIMS are attracted to Bell Works for its unique and innovative atmosphere, which rivals any office environment found in the New York Metropolitan Area. An increasing number of companies are recognizing the advantages of remaining in New Jersey or relocating here from out of state, and this remarkable property is providing us with a competitive edge.”

“We are thrilled that iCIMS has made the decision to bring its headquarters to Holmdel’s blossoming business community,” Mayor Eric Hinds said. “This dynamic atmosphere is ideal for a company such as iCIMS, which was in need of a space that could accommodate its continued growth and subsequent need for a state-of-the-art, progressive work environment.”

iCIMS, which is relocating from Matawan, is a leading provider of innovative Software-as-a-Service (SaaS) talent acquisition solutions that enables growing organizations to manage the process of attracting, screening and hiring great talent.

“I feel as if I’ve come full circle. Early in my career as a recruiter, I placed exceptional candidates into Bell Labs,” stated Colin Day, Founder and Chief Executive Officer of iCIMS. “The impressive technology created by talented people in this building will once again echo as iCIMS will usher in a new era of technology and innovation in the Garden State and continue our strong growth and profitability as we make our transition into Bell Works opens a new chapter for iCIMS.”

“Our unique approach has transformed Bell Works into a world-class venue that brings the feel and aesthetic of an urban downtown to this suburban location,” said Zucker. “We are working to create one of the most unique and attractive commercial properties in the region, and, in less than two years, we are already seeing the environment we envisioned come to life.”

“iCIMS will accelerate its growth as a world-class technology company within the exciting work-live-play environment of Bell Works,” Sarno said. “This transaction represents the perfect integration of a forward-thinking and growing company into a rapidly-evolving technology hub that will become a major conglomeration of corporate innovation and urban vibe. We’re thrilled to have been able to facilitate this milestone transaction for the township of Holmdel and the state of New Jersey. ”

Added Jeff Garibaldi, President of The Garibaldi Group: “This leasing milestone truly signifies the vision of Bell Works manifesting into a reality. The property has already distinguished itself among the region’s suburban office product, and this lease agreement only adds to its momentum. Having iCIMS amongst the already impressive roster of New Jersey-based companies at Bell Works paves the way for notable retail companies to follow suit.”

Somerset Development President Ralph Zucker attributed the recent success in attracting businesses to Bell Works’ state-of-the-art redevelopment plan, which is centered around a pedestrian “street” within the building’s existing quarter-mile long atrium. The promenade area will connect tenants and visitors to a host of dining and entertainment venues, health and wellness services, renovated office space and educational facilities, a hotel and conference center for both employees and visitors. The space will also host community, cultural and business events ranging from art exhibitions and farmer’s markets to industry conferences. Plans for the programming and restoration of these common areas are being executed by Alexander Gorlin Architects, who was appointed lead architect for their specialization in historically significant adaptive reuse developments.

In addition to the redevelopment of the former Bell Labs facility, the approved plan for the site allows for residential, recreational and open space uses outside the building, including the development of up to 40 single-family homes and 185 age-restricted townhomes, as well as a field house for sports. Toll Brothers, the country’s leading developer of luxury residential communities, is in contract with Somerset for the purchase of land outside the building to construct the development’s residential component.