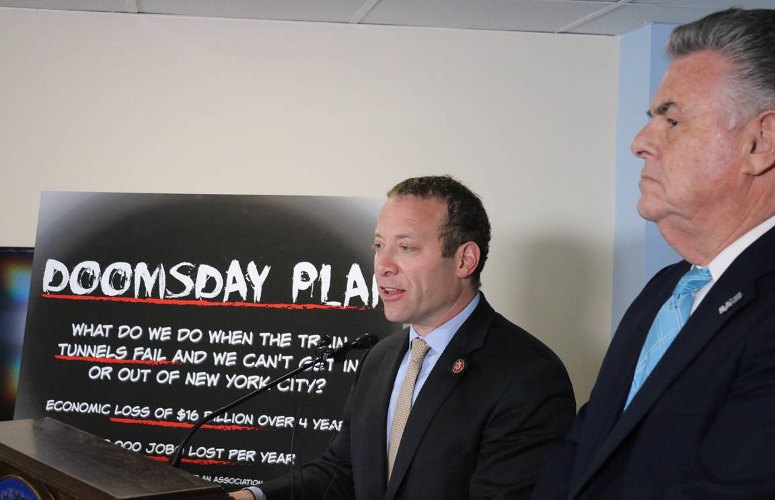 At what looks like a jab at the Trump administration’s lack of funding commitment for the Gateway tunnel project, Congressmen Josh Gottheimer (NJ-05) and Peter King (NY-02) introduced a bill yesterday that demands an economic estimate and contingency plan for a “Doomsday” scenario if one of the two North River Tunnels beneath the Hudson River is shut down. The bill would require the Secretary of Transportation to publish a report, within 60 days, that explains the effects to the US economy in the absence of the Gateway Program if one of the rail tracks fails in the North River Tunnels as well as the Department of Transportation’s contingency plan in the case of a track shutdown.

The North River Tunnels carry 200,000 travelers daily and are crumbling after damage from more than 100 years of use and flooding during Superstorm Sandy. On Tuesday, the Regional Plan Association (RPA) released “A Preventable Crisis,” a report outlining the catastrophic economic consequences of a tunnel being shut down. Closing one tunnel for repairs would cost the national economy $16 billion over four years. More than half of this cost would come from the time lost by workers from longer daily commutes.

According to Congressman Gottheimer, “Our bill will demand answers from the Department of Transportation on: how will the economy work? How will people get into the city and back home? What is their contingency plan if a tunnel goes down?”

Congressman King added, “These tunnels are a vital and irreplaceable conduit for our nation’s economy. Ensuring its maintenance, safety and reliability is a national concern and responsibility. It is too precarious a situation for human lives and economic devastation. A plan and answer is needed.”

The Gateway Development Corporation, the non-profit organization that is working closely with all major transportation stakeholders to advance the Gateway program, issued the following comments on the bill’s introduction:

“We are indebted to Congressmen King and Gottheimer for bringing critical federal attention to one of America’s greatest and most urgent infrastructure needs, the Hudson River rail project. Their bill calls [into question] the Federal government’s plan if we lose 75 percent of rail capacity into and out of the nation’s economic core.

“What’s clear from this week’s RPA report is that if one of the two-century-old tubes goes down, the whole region and nation will feel the brunt. We simply must build the Gateway projects now to avoid this disaster.”

In an interview last week with New Jersey Business magazine, Jerry Zaro, chairman of the Gateway Development Corporation, said that building a new rail tunnel and bridge between New Jersey and New York would cost approximately $13 billion or more. While New Jersey, New York, the Port Authority of New York and New Jersey and Amtrak are willing to commit to 50 percent of the project, some people claim the federal government could be withholding monies/stalling progress because the New York/New Jersey region tends to vote for Democrats.

Whether or not that is true, Congress last week did appropriate a total of $780 million that is “clearly meant” for building Gateway, although, in effect, it was not clearly labeled as such.

Bringing Underserved Communities Up to Speed with Broadband Internet Service