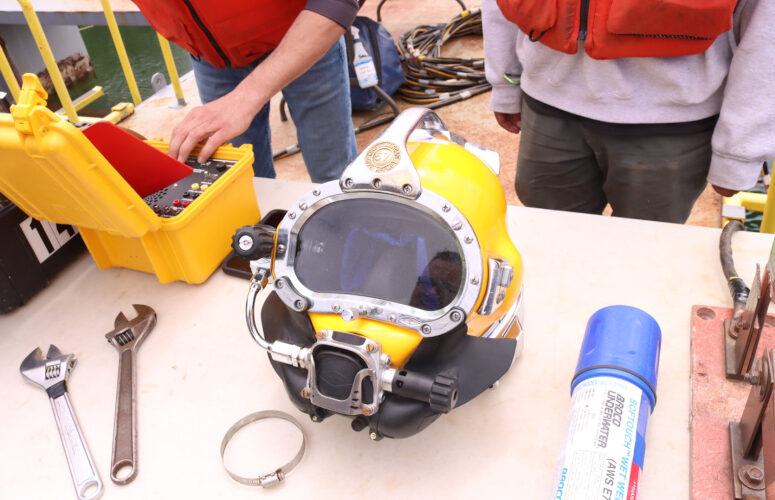 In anticipation of the thousands of construction jobs that offshore wind energy initiatives will be creating in the state and region, construction trades workers, journeypersons and apprentices will soon be learning how to weld while submerged when the first union-operated diving school for underwater welding in the United States opens and starts training people by August 1.

Located in Sicklerville, Camden County, the complex includes a 60-foot-deep manmade lake that was once a quarry. Here, people will be trained in underwater welding, pile driving, building seawalls, bulkheads and docks, and bridge foundation work, as well as learning how to operate seacrafts. 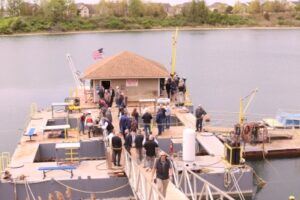 There is also a heavy construction pile driving training center on the site as well as a 12,000-square-foot building that serves as classroom space and offices. The entire complex is operated by Eastern Atlantic States Regional Council of Carpenters (EASRCC) in conjunction with the Carpenters International Training Fund (CITF). The work being done at the location complements what is being taught at EASRCC’s Thomas C. Ober Carpenters Training Center in nearby Hammonton.

According to William Sproule, executive secretary-treasurer of EASRCC, the Sicklerville complex “is going to be unique and will be a great facility to augment what we are doing go prepare our members for the offshore wind industry and all the new technologies related to the state’s renewable energy initiatives.”

Candidly, Sproule realizes the challenges of diving and underwater welding, as he says, “I would say it could be one of the most dangerous professions in the construction industry.” Yet, he said many jobs in construction are dangerous as people work on high rises, and handle dangerous tools and heavy machinery.

The training at the center will be provided free of charge to apprentices. Sproule says the facility can be used by the entire Eastern District of the Council of Carpenters members via what he calls “shared service” programs. Trainees from Maine and other New England states down to EASRCC district states, including Pennsylvania, Maryland, Delaware, Virginia, West Virginia, and Washington, D.C., will be able to use the complex.

At press-time, Sproule says that Orsted and Atlantic Shores Offshore Wind, two energy companies that will be building wind farms off the coast of Atlantic City, are interested in the training that will be taking place at the diving school in preparation for the construction and installation of wind farms. He says the EASRCC is also in discussions with Atlantic Cape Community College and the Rowan College of South Jersey (Gloucester County College) on how the two academic institutions can take advantage of the training facility.

EASRCC purchased the Sicklerville facility, site of a former diving school, for $1.9 million. After needed upgrades, he said the council will have invested a total of $2.4 million into the complex.

“The council owns the facility, and we are leasing it to Carpenters International Training Fund so that it can operate the center,” Sproule explained. At press-time, the diving school is awaiting certification and accreditation.

“Education is key in this business … and this center will make our members the most highly trained, proficient and safest workers in the industry,” Sproule concluded.