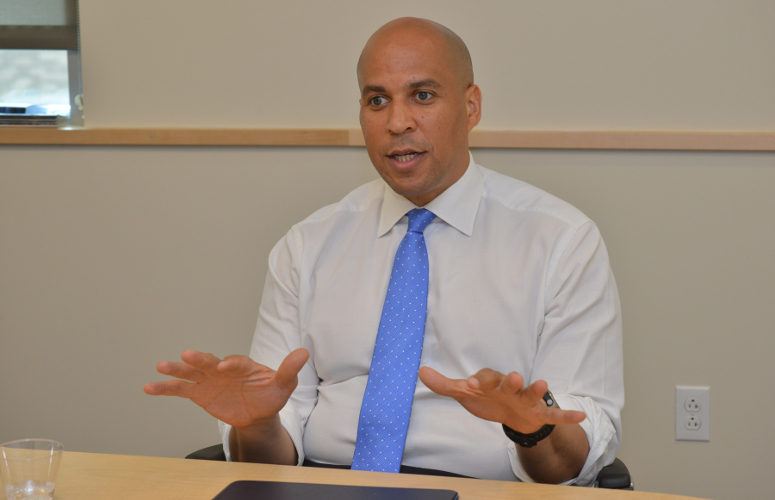 US Senator Cory Booker being interviewed by NJ Business Magazine in 2014.

Unable to qualify for tomorrow night’s Democratic presidential debate and polling with low single digit numbers for most of his campaign, US Senator Cory Booker today ended his bid for president of the United States. There are now 12 Democratic candidates remaining in the primary race.

Booker, who announced his candidacy almost one year ago on February 1st, was having difficulty raising funds when compared to top-tier Democratic candidates. He announced on his campaign website that “our campaign has reached the point where we need more money to scale up and continue building a campaign that can win — money we don’t have, and money that is harder to raise because I won’t be on the next debate stage and because the urgent business of impeachment will rightly be keeping me in Washington.”

Serving as a US Senator from New Jersey since 2013, the former Newark Mayor (from 2006 – 2013) stated that his campaign “rallied around bold ideas to tackle some of the biggest challenges the nation faces.

“We moved the debate forward on gun violence — introducing a plan with the most aggressive gun safety measures our country had ever seen. We advocated for progressive, swift change to our criminal justice reform system. We fought to protect and strengthen reproductive rights and access to abortion. Together, we spoke out and stood up for people and communities that have been left out and left behind,” he wrote on his website.

He thanked his supporters and said he would do everything in his power to elect the eventual Democratic nominee for president and to elect great Democrats to the Senate “up and down the ballot in 2020.”

Booker plans to run for his second full term as US Senator, with that election being held this coming November. Under New Jersey election law, he was able to simultaneously run for president and senator.

In the 2014 Senate race, he beat Republican Candidate Jeff Bell, winning 55.8% of the vote versus Bell’s 42.3%. Booker was first elected to the Senate in 2013 upon the death of Democratic Senator Frank Lautenberg (a special election was held).

Booker’s path in public service can be traced back to his college days when he served as senior class president at Stanford University. There, he received a bachelor’s degree in political science (1991) and a master’s degree in sociology (1992). He then attended The Queen’s College, University of Oxford in England, as a Rhodes Scholar, receiving a graduate degree in 1994. In 1997, he earned his Juris Doctor from Yale Law School, where he operated free legal clinics for low-income residents in New Haven.

He served on the Newark City Council from 1998-2002. In January of 2002, he announced his candidacy for Newark mayor, but lost the election to longtime incumbent, Sharpe James. In early 2006, he again announced his candidacy for mayor. James initially filed papers to run, but then dropped out of the race. Newark Deputy Mayor Ronald Rice was James’ replacement. Booker defeated him by garnering more than 72% of the vote … the largest landslide in Newark history.

During his rise in Newark politics, Booker was dubbed a “Rock Star Mayor” by Oprah Winfrey. He has earned this nomenclature by, among other things: persuading Facebook founder Mark Zuckerberg to donate $100 million to Newark’s school system in 2010; raising money in Silicon Valley, New York City and Los Angeles; and giving speeches at the 2012 and 2016 Democratic National Conventions.

Others called him “Superhero Mayor” as he once: ran into a burning building in Newark to save a woman (obtaining second degree burns to his hands); went on a 10-day hunger strike (as a Newark councilman in 1999) as a crusade against drug dealing; and, during his 2006 campaign for mayor, was the target of an assassination plot by Bloods gang leaders.

Verizon Media to be Acquired by Apollo Funds