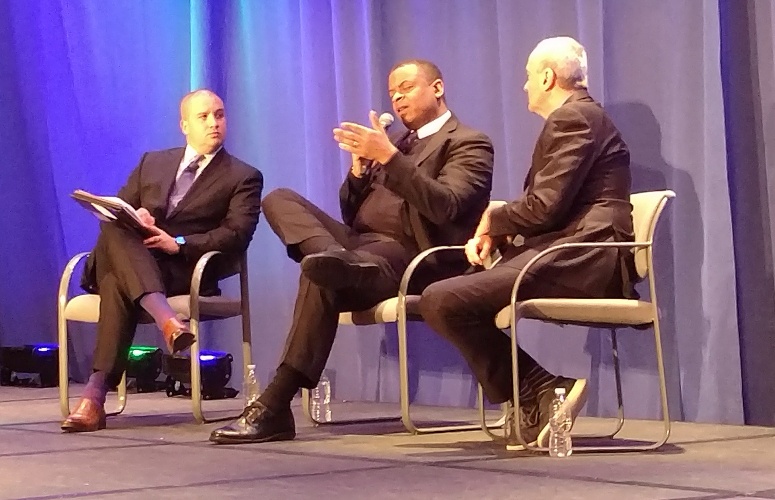 Gov. Phil Murphy today announced the creation of a competitive grant process in which $500,000 will be given to five communities ($100,000 each) that develop “the best game plan to tackle” their Opportunity Zone initiatives. The grant was announced at today’s New Jersey Opportunity Zone Summit sponsored by Choose New Jersey and held at the Hyatt Regency in New Brunswick.

The Opportunity Zone program was created in 2017 as part of the federal Tax Cut and Jobs Act. Authored by Senators Cory A. Booker (D-NJ) and Tim Scott (R-SC), it is designed to spur economic development and job creation in designated low-income Census tracts nominated by governors across the country and certified by the US Department of Treasury.

There are 169 zones in New Jersey across 75 municipalities. These zones will allow investors to direct capital into new projects and enterprises in exchange for capital gains tax advantages.

Murphy, in a discussion that included Anthony Foxx, former US Transportation Secretary and current chief policy officer and senior advisor to the president of LYFT, said he is proud of the portfolio of properties that New Jersey presented to the US Department of Treasury.

Commenting on the corporate gains benefits that the program will provide, he said, “As a former financial services person (alluding to his career at Goldman Sachs), the opportunity to defer capital gains or ultimately expunge them is a big deal.”

At the same time, Murphy stressed that residents and businesses within the zones should not be pushed out of their communities due to gentrification. “It is important for a developer to come in in a way that does not push folks completely out or place them on the margins,” he said.

He said, as an example, that Newark is a great investment opportunity and that it is working for “the folks who fought, stayed and lived there for decades when the [economic] trajectory wasn’t as promising.” He added that the state’s largest city is the perfect example of how to do things right.

According to Foxx, “Opportunity Zones give us a chance to reimagine our communities. There is an opportunity here not to just get good things going, not just to create good jobs, not just provide access to services, or reinvent places that are barren. … There is an opportunity to reconnect ourselves and have the conversation between those who have the resources to invest and those who have the interest in seeing their communities improved. That is the biggest opportunity… to be able to have something that brings us together and makes us better as New Jersey and country.”

In a pre-recorded video Senator Booker credited Governor Murphy for his efforts in trying to make the program work for all New Jerseyans. He mentioned the difficulties in bringing capital to low-income areas in order to create jobs and smart growth. “This legislation, if used right, could help these areas across the country,” he said.

Presenter Sarah Bianchi, a team member of The Governance Project, an organization that helps communities combat disparities across the nation, said a new set of Opportunity Zone guidance rules is expected to be introduced by the federal government within the next few weeks. She advised that a community’s strongest assets – the strongest projects that can get off the ground – should be considered, and that across the nation, colleges and universities, as well as hospitals, are being used as Opportunity Zone anchors.

She said that all stakeholders should come together – investors, developers, and municipal leaders – to make projects work.

In a panel discussion on how states and municipalities can maximize the zone program, Adrian Mapp, mayor of Plainfield, stressed that it is “extremely important that municipalities are ready and willing to work with investors, so that the latter can maximize the opportunities that we present them.” He said that Plainfield council members and other professionals on board are being exposed to training “so they will be able to step up to the plate and assist investors.”

Meanwhile, Tim Sullivan, CEO of the New Jersey Economic Development Authority, who moderated a panel on “The Intersection of Opportunity Zones and the Innovation Economy,” commented that the program is an important catalyst to recapture the state’s innovation economy. He said that the program will create strong and vibrant communities in downtowns and near transit systems … areas that attract young talent and businesses.