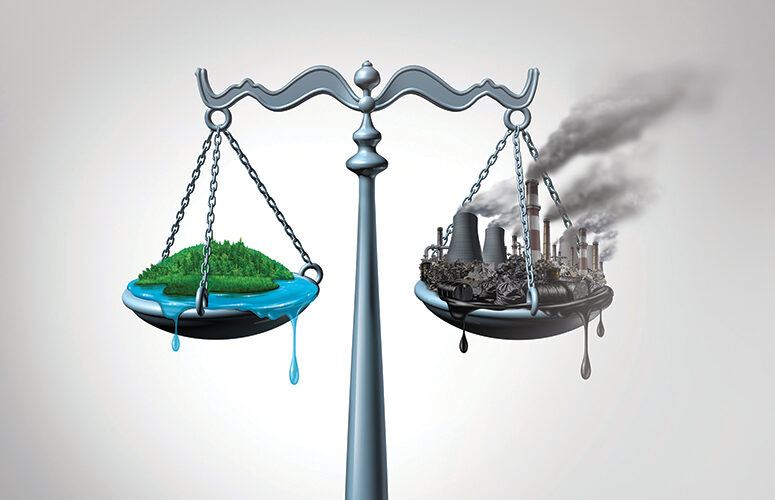 Concern for people’s health and business operations may lie in the balance in nation’s strongest law of its kind.

There are pros and cons to New Jersey’s environmental justice law. It will hopefully lessen the negative health and environmental impacts of those living in some 310 “overburdened” communities in the state. At the same time, it might drive businesses, especially those that operate Title V facilities such as large manufacturing and chemical plants, out of New Jersey.

The law, which Gov. Phil Murphy announced he would support on Juneteenth 2020 and which he signed on September 18th of the same year, authorizes the New Jersey Department of Environmental Protection (DEP) to evaluate the environmental and public health impacts of certain facilities on communities that disproportionately have been negatively impacted by their operations.

Some experts in the field say that existing facilities will not be impacted by the law if they just need to renew their environmental permits without expanding or building a new facility. However, if they want to build a new facility, the DEP can deny the permit if an environmental justice analysis finds that the facility will have a disproportionately negative impact on the community.

The types of operations that will be impacted by the law include:

Speaking at a recent virtual seminar co-sponsored by Lake Hopatcong-based Enviro-Sciences, Inc., and the National Association of Environmental Professionals (NAEP), DEP Commissioner Shawn LaTourette said the law will also be extended to Title V facilities (those that have a federal air quality permit under the Clean Air Act). In dealing with the permit renewals of these facilities (some 220 in the state), LaTourette said, “Those permits cannot be denied, but they could be conditioned.”

That is a concern for Ray Cantor, vice president of government affairs at the New Jersey Business & Industry Association (NJBIA). “We don’t know what the requirements for Title V facilities will exactly be and we don’t know if they will cause these facilities to close. However, if [these businesses] have a choice between expanding in New Jersey or in Delaware, for example, they may decide to go to Delaware because it is a quicker and more predictable environment,” Cantor tells New Jersey Business.

Chris Whitehead, air practice leader of Enviro-Sciences, Inc., echoes Cantor’s comments. Participating in various stakeholder meetings on the issue, he says, “A lot of large corporate clients, that have been expanding out of state, are hesitant to do so in New Jersey because of the law and the uncertainty that is hanging over their heads right now.”

At press-time, the final rule proposal for the environmental justice law is expected at any time. There will be a comment period followed by a move toward final adoption sometime next year.

According to LaTourette, the path to permit approval now includes public hearings with an overburdened community prior to the submission of the permit application. “That is a big paradigm shift as to what we typically required throughout most of our environmental regulatory scheme,” he said. “We didn’t always have public hearings. Now they will be a matter of course.”

He said, however, this participation in itself is not enough. “We have to look beyond what environmental law has historically done – which is to evaluate the potential impact upon air quality or water quality, for example, by any one industrial facility – and look at the collective whole of underlying public health and environmental stressors within a host community in which a new facility or expanded facility is proposed. This is not something we have done in the last 50 years of modern environmental law,” LaTourette said.

The DEP will conduct an additional level of analyses in the overburdened areas, LaTourette said. This will include the creation of a data analytics tool that will be deployed to assist communities and regulated businesses in identifying health and environmental stressors and how they are quantified and assessed in the course of creating an environmental justice impact statement (EJIS).

The law also calls for a comparative analysis of the proposed project, which looks at its impact on an overburdened community versus another area. The specifics on what areas will be used for comparison is being determined in the rule making process, LaTourette said.

“The law is not a panacea for the issues faced by our largely minority black and brown communities,” LaTourette added. He said the law has its limitations: “It doesn’t require the absolute denial of environmental permits for new facilities. … It does not allow the agency [DEP] to deny permits for renewals or expansions of existing facilities.”

NJBIA’s Cantor says the law will impact Title V operations that have already invested tens of millions to hundreds of millions of dollars to build their facilities. “They have been good neighbors and have met every environmental standard that has been required of them. Many have gone well beyond the standards. Now, despite everything they have done, they will be subject to a law where their future will be in doubt,” he says.

State Senator Troy Singleton (D-Burlington), the sponsor of the environmental justice bill, said at the virtual seminar that while the bill was signed into law in 2020, the struggle in helping people in impacted communities goes back decades. He added, “The legislation has been worked on for several years … but the momentum was spurred by what we saw with the tragic death of George Floyd. His murder and the Black Lives Matter movement were opportunities to turn the momentum into a movement to create a fair and just society.

“No community should shoulder a greater environmental burden or benefit. This law strikes a balance. It is my hope that the [New Jersey] law will truly serve as a model for the rest of our nation,” Singleton concluded.

Hiring from a Global Labor Pool