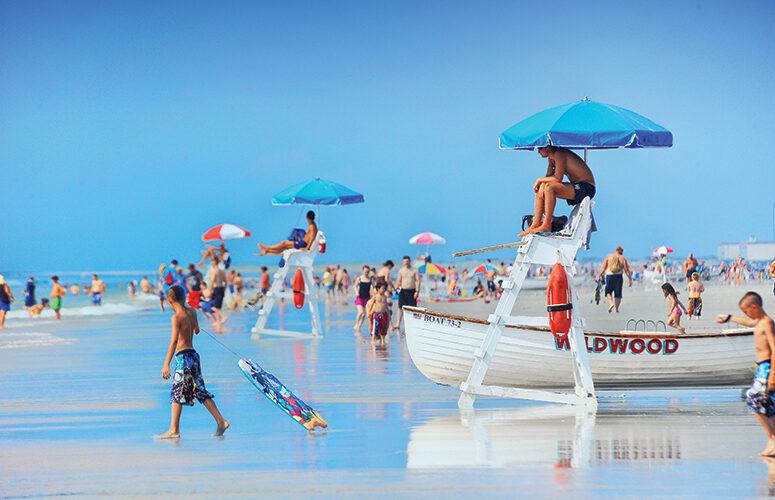 The summer tourism season is at our doorstep, and industry experts predict a whole lot of fun in the sun at all New Jersey vacation and recreation destinations.

Nearly 14 months into this pandemic, people are eager to leave their homes and enjoy the world outside their bubble again. Still, the question remains: How can New Jersey continue to keep visitors safe from the coronavirus?

Travelers need only look at how popular tourism destinations in the state safely adjusted to welcome more visitors than anticipated last summer and fall, says Jeffrey Vasser, executive director of the state Division of Travel and Tourism.

“We are not dependent on air travel. The majority of visitors come to New Jersey in their own personal vehicle from in-state or from a 200-mile radius,” he says.

Additionally, with its sunny beaches, mountain trails, and green parks, there is lots of space to spread out in New Jersey and breathe in some much needed fresh air.

“I’ll hedge my bets and say that while it may be weather dependent, this upcoming tourism season will be stronger than expected,” Vasser says.

“We were on a roll,” Vasser says. “The governor challenged us to welcome 150 million visitors by 2023, and the secretary of state challenged us to expand our typical marketing to be less shore centric and more focused on food, arts, culture, ecotourism and agrotourism – and it worked.

While 2020 data has not yet been released, Oxford Economics and its subsidiary Tourism Economics forecast the New Jersey tourism industry would decline nearly 25% in 2020 as a result of COVID-19, with only 88 million visitors. 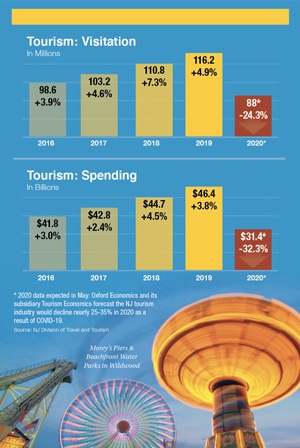 “There was tremendous demand for outdoor recreation that people could drive to, and most of our destinations worked with local businesses, especially hospitality and service businesses, to make sure everybody was following Centers for Disease Control and Prevention (CDC) guidelines to deliver a good experience for visitors while providing secure work environments,” she says.

“All of the shore towns, the campgrounds, the boardwalks, the state parks … they all worked very hard to follow the governor’s explicit directives to keep things safe, and people were careful to be socially distant,” Vasser adds.

It was, in fact, quick reactions from proactive business communities that kept things afloat, says Ben Rose, director of marketing and public relations for the Greater Wildwoods Tourism Authority.

“After readjusting our budget projections in March 2020, we projected we would lose nearly 70%, but we ended up at the end of the season with a nearly 23% loss over a five-year average,” Rose says.

He cites swift adjustments to regulations as just one of the factors for having a stronger season than expected.

“The three municipalities on our five-mile island of the Wildwoods introduced ordinances and changed codes to allow restaurants to expand out onto their sidewalks and adjacent parking lots, with many restaurateurs creating beautiful outdoor spaces for al fresco dining,” he says.

Those changes have recently been made permanent, he added – a trend we can expect to see throughout the state as more businesses recover.

For example, Atlantic City was hit particularly hard, with recent data from the NJ Division of Gaming Enforcement indicating a nearly 33% decline in vehicle visitation, a nearly 60% decline in air travel, and a 21.5% decline in total gaming revenue in 2020.

“But as bad as last year was, it could’ve been significantly worse, had we not adapted as best we could to the changing situation,” says Matthew Doherty, executive director of the Casino Reinvestment Development Authority (CRDA). “For example, one of the extremely successful changes that went into effect last year was open alcohol containers on the boardwalk and in certain sections of town, like the Orange Loop – for which the CRDA has now put regulations in place to make permanent.”

It’s enough to encourage Atlantic City to invest $4 million into renovating its beachfront restrooms before Memorial Day this year in an effort to attract more families to its free beaches.

“One thing I learned, as the former Mayor of Belmar, is that moms decide where families vacation, and if a mom is comfortable with a toddler using a restroom, you can lock that mom and all her mom friends in for reoccurring business,” Doherty says.

It also speaks to the biggest draw for visitors in the summer: the Jersey Shore.

For example, Ocean County’s population typically grows from 600,000 in the winter to nearly 1.3 million in the summer, with tourism revenue totaling nearly $5 billion annually.

“Last summer, we had very few issues on our beaches, or on any of our waterways, including those boating, fishing and enjoying recreational activities in our bays and canals,” says Joseph Vicari, Ocean County commissioner.

What he did see, however, was a dramatic rise in second home sales.

“I have never seen prices of homes go up the way they have, and still are these last 90 days,” Vicari says.

Rose says the same of the Wildwoods: “Second home sales were off the charts last summer – the inventory is gone.”

This not only led to increased business for grocery stores, home improvement businesses, and furniture and electronics retailers, but also to increased enrollment at local schools, Vasser says.

“People were staying and working remotely at their second homes at the Jersey Shore,” he says. “So, in Margate, for example, we saw a 10% increase in enrollment at the local schools.”

“Although campgrounds opened late in New Jersey because of state restrictions, we still had a very good year, with most campgrounds honoring requests through Thanksgiving,” she says.

According to the RV Industry Association, there was a 4.5% increase in RV manufacturing in the US in 2020, with an even larger increase of 19.5% expected for 2021.

“Based upon the reservations that the campgrounds have taken thus far this year, we anticipate our 2021 season be very strong as well,” DelVescio says.

There is unanimous optimism across the board that this summer and fall will result in exceedingly strong rebounds for the state’s tourism industry.

“We’re anticipating a very busy season,” Pepenella says. “There’s lots of inquiries – so, we certainly recommend people jump on board now to guarantee their plans.”

“Our hotels and motels are currently reporting a 30% increase in advanced reservations,” he adds. “And another big indication of our positivity is the fact that the Barefoot County Music Festival on the beach, which is booked for August, has already sold 40,000 three-day passes.”

“I don’t think there’s any question about it – that number is going to go way up,” he says.

In preparation, Vicari says he is encouraging and working with businesses to reopen as soon as possible.

“Small businesses, mom-and-pop shops, those are the backbone of the economy in Ocean County,” he says. “We have and will continue to do everything possible to help them – because when people come, they will spend their money.”

Many residents already are, Vicari adds: “We have 200,000 senior citizens with fixed incomes who want to spend time with their grandchildren, so they’re buying advanced tickets to Six Flags and Jenkinson’s Boardwalk.”

Vasser says casinos being allowed to operate at 50% capacity will also help Atlantic City to retain its status as the state’s No. 1 tourism destination.

“Last year, casinos weren’t allowed to open until early July, so this is a huge boost to our summer season,” he says.

Even so, most safety protocols will remain in place, including advanced sanitation procedures, mask and social distancing requirements, and state-mandated limits on both indoor and outdoor gatherings, Vasser cautions.

“We certainly want to encourage people to come spend time outdoors, but we’re not throwing our doors wide open just yet,” he says. “It’s still a tough balancing act.

“Assuming people stay vigilant, our numbers should continue to improve, but if people become careless, it could set us back.”

Because the health and safety of both residents and visitors come first, most destination marketing organizations in the state have increased – yet altered – their marketing campaigns, carefully letting people know how and where New Jersey is open for tourism business this year.

“It’s important for those traveling to have accurate information and confidence while vacationing here,” Pepenella says. “But it’s also about safely bringing people to businesses in tourism-focused areas so that they can recover as they need to.”