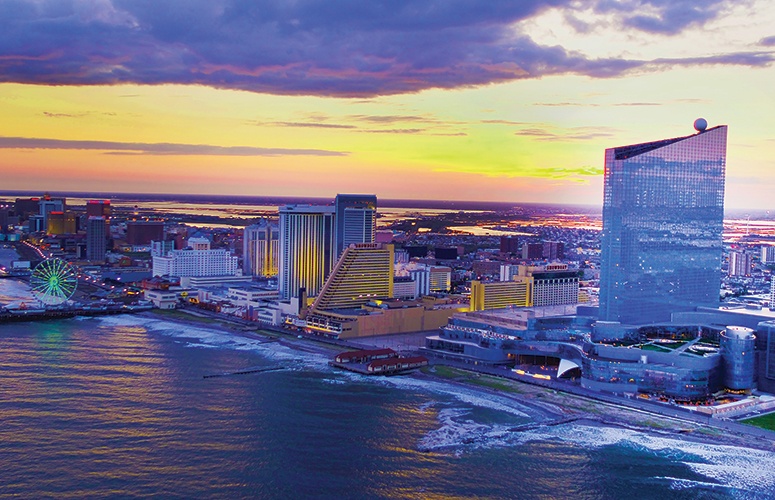 The dice keep rolling for economic prospects, jobs and the future of the city as new casinos thrive and other opportunities take shape beyond gaming.

The long-term bet on Atlantic City’s continuing redevelopment has leaned heavily on the gaming industry, but now there are additional possibilities in the mix. The city’s casinos will always be major fixtures in the local economy, yet there is a need to widen the scope of opportunities. A string of closures five years ago presented a harsh reminder of how quickly a downturn in gaming can have repercussions well beyond the city limits. New casinos have since opened and other avenues of economic growth are also being explored to give Atlantic City another shot at rebirth.

Part of the city’s next evolution can be seen in the public-private collaboration that established Stockton University’s Atlantic City campus, which opened last September. Brian Jackson, chief operating officer for the new campus, says $167 million from the Atlantic City Gateway Project went towards academic and residential buildings, and a parking garage. “It takes entities like Stockton and South Jersey Gas working in collaboration with the state, the county, the city, and other private entities to make something like the Gateway Project happen,” he says. “It served as a beacon of hope for a lot of people in the city.”

More than 500 students reside on the campus during the academic year, with 250 students expected during the summer season. “It was a strong first year for us,” Jackson says.

Those summer students may take on local internships and jobs while taking class, he says. Stockton is collaborating on internships with the casinos and South Jersey Gas, which established a new headquarters in Atlantic City under the Gateway Project. Jackson notes that housing in the shore area can be expensive. Stockton offered affordable space at the new site this summer even to students who do not attend the school as long as they are enrolled as full-time students somewhere.

Stockton intends to keep deepening its ties to Atlantic City in ways that will weave students and faculty more into the community and local economy. There are plans pending on funding for more housing to be built for another 400 students as the campus grows. “Within the next two years we are going to need additional housing,” Jackson says. “We are attracting more students who live farther away from the campus.”

Since the groundbreaking for the campus, Jackson says some new businesses such as ice cream shops and restaurants have sprung up in the surrounding area. At least 10 businesses have opened, renovated, or expanded in the university district, and the presence of the campus has offered some additional benefits to neighboring businesses. “Properties within the three commercial districts that already existed in area received additional zoning authorizations with the arrival of the new campus. Now there is an opportunity for other types of businesses to come in and open up,” Jackson says. “We hope that will allow property owners to market their properties to a wider range of businesses.”

Redevelopment activity among casinos has not gone unnoticed by Jackson as it may lead to more opportunities for students and the surrounding community. “Having the Hard Rock Casino and the Ocean Resort Casino open last summer has provided thousands of new jobs for residents,” he says. “It’s brought revitalization to the inlet area.”

He notes that there is a new housing development project in the works from MGM Resorts and Boraie Development, which have partnered to build 200 luxury condos for the city’s marina district. Jackson also sees more collaboration among casinos. As the gaming revitalization continues, he says Stockton will increase the number of courses offered in hospitality and business to complement the changes in Atlantic City. “There’s always more that could be done, but the city is better positioned than it’s been in decades,” he says.

Casinos in Atlantic City have seen some tough times, but the rise of new establishments may signal a tangible comeback. Mike Donovan, chief marketing officer at Ocean Resort Casino, says his company’s investment into the property shows confidence in the Atlantic City market. Ocean Resort was previously Revel Casino, a headline-grabbing establishment that closed in 2014, just two years after it initially opened.

The current owners acquired the property with a plan to put those challenging times in the past and reopened it as the Ocean Resort in June 2018. Donovan says part of the plan was to reconnect with prior patrons of Revel, but to also seek new clientele. “When you open any new property, there is a ramp-up period to build your database and get customers through your door,” he says.

Getting the public to see the revitalization that is currently underway continues to be important for building momentum. “You had Taj Mahal close, Revel close, Showboat close – it definitely hurt the city overall,” Donovan says. Showboat Atlantic City closed in 2014, but reopened in 2016 as a non-casino hotel.

So far, Ocean Resort has been drawing in customers. Donovan says his casino saw 10 percent growth in April versus March even though the market was down 14 percent. Gaming available at Ocean Resort includes 1,900 slot machines and more than 100 table games with 200 new games expected by July 4.

Ocean Resort is not the only establishment celebrating a freshman year in the city, Donovan says. Hard Rock Hotel & Casino Atlantic City also opened in 2018. The location was previously the Trump Taj Mahal, which shuttered in 2016.

The turnaround of these properties comes in the midst of an evolution in the gaming market. Online gambling and the appearance of casinos in neighboring states has increased competition. Donovan says visitors are excited to come back to Atlantic City with the recent changes. Sports betting became available in June 2018 at the city’s casinos, which he says attracted a healthy amount of business. March Madness for NCAA basketball, for example, drove traffic to Atlantic City hotels and restaurants in an otherwise slow period. “We sold more beer during the first weekend of March Madness than any other time in the property’s history,” he says.

There is an audience in Atlantic City, Donovan says, that extends beyond gaming. Entertainment options in the city include nightclubs and beach clubs, fine dining, pools and concert performances. The customer base these days is a more diversified, younger crowd that seeks a variety of entertainment.

Donovan says Ocean’s outreach to clientele has also been crucial in the competitive market. This has included reconnecting with customers from the Revel database and presenting them offers to bring them back to the property. Further, he says the rates at the hotel are now lower and more in line with other properties in the city.

In the past, when the property was Revel, the thought may have been to cater more to high-end clientele. “It’s tough to do that in Atlantic City,” Donovan explains. “There are plenty of properties with competitive offers.” The change in strategy seems to be paying off. He says April was the resort’s second highest occupancy month at 86%. “We’re planning on being 90% plus occupancy for the rest of the summer,” he says.

Even with the resurgence, the city and region have not forgotten the economic wakeup call. When Atlantic City saw the prior casino closures, some 20,000 jobs were lost in the region, says Lauren H. Moore Jr., executive director, Atlantic County Economic Alliance. “Our economy was really based off gaming and tourism; it was not diversified.”

Now there is a push to cultivate additional industry types to help the region thrive. Moore sits on the Atlantic City Executive Council, chaired by Lt. Gov. Sheila Oliver. “It is a coalition of organizations brought together to work on various projects and various issues in Atlantic City,” Moore says. Some of the economic development plans include attracting Esports organizations, the competitive video game industry, to the city.

This is still a work in progress and includes bringing technical infrastructure resources to the city. Continent 8 Technologies, a provider of networking and data connectivity solutions, built a data center in the Atlantic City Convention Center, Moore says. “This data center is going to provide us with the bandwidth to support Esports projects and tournaments here,” he says.

An influx of interest in Esports, and other pushes into technical industries, could also invigorate local STEM education efforts, offering students local outlets to potentially apply the skills they develop in the classroom. Moore says a host of aviation-centric initiatives are underway.

“Aviation was identified as an industry that would boost the economy in the county,” he says. That includes the Atlantic City International Airport and the William J. Hughes Technical Center, air transportation system laboratory run by the Federal Aviation Administration. At press-time, a ribbon-cutting is underway for the 58-acre National Aviation Research and Technology Park, a nonprofit auxiliary organization of Stockton University, which will neighbor the Hughes center. Moore says the goal is to attract aviation research companies to the site as well as plans for an aviation technology school.

If these collective aviation efforts come together, Atlantic City and the region may takeoff on a new trajectory. “We’ve been focusing on developing this industry to create employment opportunities for our residents,” Moore says.