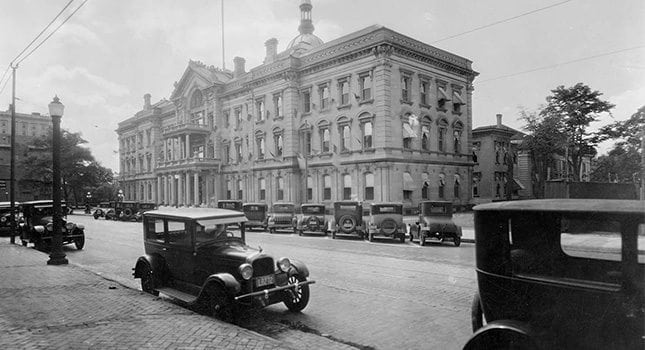 In the 17th century, Europe was a boiling cauldron of wars, insurrections, dynastic feuds and religious conflict. England, France, Spain, Portugal, Holland, Sweden and other powers jockeyed for dominance. Some of the turmoil in the old world spilled over to the north Atlantic coast of America, with its pine forests, rivers and lakes, cold winters and sparsely populated settlements. One such European outpost was the Dutch Colony of New Netherland, which included much of what are today called the mid-Atlantic states. It galled King Charles II of England that the Dutch colony separated English settlements in the north from those in the south. In May 1664, English warships laid siege to the Dutch settlement of New Amsterdam on Manhattan Island. The English demanded that the Dutch surrender their colony, and – realizing their weak defenses – the Dutch wisely complied.

The brother of King Charles – James, Duke of York – was given a role in divvying up the former Dutch colony. Through legal documents he signed on June 23 and June 24, 1664 the Duke carved out about 7,800 square miles of the newly conquered territory that lay between the Hudson River in the east and the Delaware River in the west. This peninsula James called Nova Caeseria, or New Jersey. The name was probably a shout out from the Duke to the Isle of Jersey in the English Channel. Thus the name New Jersey was born, and the year 1664 has come to be regarded as our state’s birthday.

For over a century after the conquest of New Netherland, New Jersey was a British colony. It is clear that little New Jersey did not have the same clout in the Empire as larger and more lucrative colonies like New York and Virginia. In this sputtering existence, one can begin to see the emergence of a Jersey sensibility. A royal governor assigned to the colony opined in 1748 that New Jersey was “the best country I have seen for middling fortunes, and for people who have to live by the sweat of their brow.” In other words, Jersey was seen as a blue collar, Jersey Boys kind of place for plain sorts of people who tell it like it is.

The American Revolution and the 1776 Constitution

The connection of Great Britain to the colonies was severed in 1776, when Americans rebelled against King and Parliament. New Jersey emerged from the shadows in this conflict, serving as a strategic crossroads where key battles were fought. New Jersey was also one of the earliest states to write a constitution affirming its independence. Ever cautious, New Jersey’s founding fathers included an escape clause: “It is the true Intent and Meaning of this [constitution], that if a Reconciliation between Great Britain and these Colonies should take Place, and the latter shall be again taken under the Protection and Government of Great Britain, this Charter shall be null and void, otherwise to remain firm and inviolable.” Even then, New Jerseyans liked to keep their options open. Jersey Boys were now in charge.

So began New Jersey’s existence as a state within the new American union. There have been 53 elected governors since then. Some have been knaves, some devoted servants of the people. To set the ground rules for law and government, the state has adopted three different constitutions (one in 1776, one in 1844 and one in 1947). Each constitution has had its own quirks and its own benefits. We can examine New Jersey’s landscape of politics and government by using those three charters as landmarks.

The constitution of 1776 was a brief, simple document, designed to serve a realm of farms and villages. It had to be brief because it was written while the British army was preparing to invade. In this constitution, New Jersey’s rebels repudiated the idea of a ruling monarchy. They made sure that the governor of the state would be a creature of the Legislature. He could be elected for only one year at a time, had no veto power, and was elected to office by the Legislature, not the people. The first state governor under the 1776 Constitution was William Livingston. He turned out to be an excellent choice, providing leadership in the midst of enemy invasion during the Revolution.

The world of New Jersey changed after the Revolutionary War era. Trenton was designated the capital of the state, with a State House to accommodate the governor and the Legislature. Organized political parties emerged to jockey for power, immigrants settled in the state, a network of canals and railroads was built, cities grew and complex investment enterprises were organized. In 1844, a new constitution was adopted in New Jersey, which was better suited to handle this new environment. Under this document, governors now served three-year terms, but had to sit out the next three years before being able to run again for governor, and were elected by the people, not the Legislature. The 1844 Constitution also gave the governor a veto to exercise in his clashes with the Legislature, but it could be overridden by a simple majority. An important part of the constitution was that it protected business contracts, a necessity in a society entering the industrial and market revolutions. The 1844 Constitution also created free public schools, and extended the right to vote (though shamefully, not to women or African-Americans).

When it was adopted, the 1844 Constitution was an improvement in many ways over the 1776 one. But as time went on, it too started to unravel. It is hard to believe that the 1844 charter endured for 103 years. Unprecedented events took place in those years that would have been better served by a more effective framework of government. Among the challenges to government were the Civil War, Prohibition, the Great Depression, and World Wars I and II. Some of New Jersey’s greatest politicians served under the 1844 Constitution. The most effective of the governors under the 1844 Constitution was Woodrow Wilson, arguably the best governor of any state, anywhere. He introduced reform legislation that vaulted him into the presidency of the United States. But there were also some less effective leaders, like George McClellan, who quarreled with the Legislature and bemoaned as a “nuisance” the fact that he had to go down to Trenton from time to time in order to conduct the affairs of the state.

One sinister figure in later years of the 1844 Constitution was Frank Hague, mayor of Jersey City from 1917 to 1947. He did not hold office as governor, but he didn’t need to. By controlling the vast number of votes in Hudson County, he could throw his support to whomever he chose to be in the governor’s chair in Trenton, Republican or Democrat. South Jersey politicians had their own tools to gain power. Every county, whether large or small in population, had two state senators. South Jersey, with its sparsely populated counties, could capture a majority of the seats in the Senate even though the preponderance of the state’s population was in the north.

There was sentiment in the World War II era for New Jersey to jettison the patched, antiquated 1844 Constitution, and write a new one that reflected the strong executive legacy of Franklin Roosevelt’s New Deal. There were opponents to such a modernized constitution, notably Frank Hague, but a determined new governor, Alfred Driscoll, successfully led the campaign for a new and better constitution. The document abolished racial segregation and defended civil rights. It also strengthened the role of the governor to the point where the office is today regarded as the most powerful of any governor in the nation. Under the new constitution, the governor’s term was extended to four years, and the incumbent could run for a second term. It now took a two-thirds majority in the Legislature to overturn a governor’s veto. The governor also had a line-item veto, and could wield sweeping executive orders. The 1947 Constitution and subsequent laws came down heavily on political corruption and established a stringent criminal justice system. New Jersey may have a reputation for political corruption, but, believe it or not, national studies show that these measures have had a positive effect.

So on this 350th anniversary of the Duke of York’s creation of a political entity named New Jersey, we can take pride that Jerseyans have been able to adapt to changing circumstances. One fact that has emerged is that even when determined governors are constrained by the framework of a constitution, they have been able to achieve their vision. William Livingston, Woodrow Wilson and Alfred Driscoll are cases in point. What will the next 350 years bring? Will our descendants someday debate whether robots can be elected to the Legislature? Have no fear – the Jersey men and women of the future will work it out. NJB

Senate President Stephen Sweeney Will Not Run for Governor