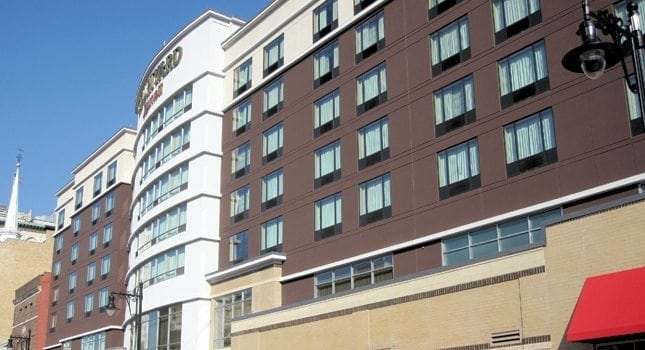 The Courtyard by Marriott Hotel – opened in 2012 behind the Prudential Center on Broad Street – was the first new hotel in Newark in 40 years.

Newark: Rising Toward a Zenith

The City of Newark is undergoing a wave of economic development projects, as it continues to bolster its profile.

For many people, the 1997 opening of the New Jersey Performing Arts Center in Newark was a turning point for the city, ushering in a new wave of sophistication and culture. While Newark has since seen numerous and notable economic developments, the city has experienced a recent flurry of activity: It now reports a staggering 39 major development projects that were underway in 2011 or 2012, and an additional 29 projects that were approved in 2013, or will commence in 2014. Perhaps as “icing on the cake,” the elite Whole Foods grocery store has signed a lease within the city, underscoring Newark’s multi-dimensional ascension.

Dan Jennings, deputy mayor, department of economic and housing development, for the City of Newark (who also is vice chair for Brick City Development Corporation’s board of directors), says, “There is definitely proof that the city is moving to greater heights. There has been more than a couple billion dollars’ worth of projects that have either begun construction, or have been completed, over the last couple of years. Before that, there might have been talk: ‘Well, we have this in the pipeline; we have that in the pipeline.’ But, we’ve been emptying out the pipeline, and now we are thinking about what is next for Newark.”

The city’s boom is arguably the result of a unique synergy: Mayor Cory Booker (now a United States senator) by some accounts had a magnetic leadership style; the State of New Jersey offers a wealth of economic development incentives for developers; and borrowing rates have been extremely low. Moreover, the economy has been recovering from the doldrums of the 2007-2009 recession, and this too is facilitating Newark’s projects.

Chip Hallock, president and CEO of The Newark Regional Business Partnership, adds, “I think [many] elements are [combined] with what many people, who have been in the city for a long time, already know: This is a city with tremendous assets.”

Indeed, the 26-square-mile city has: close proximity to Manhattan; a major international airport and a separate, massive seaport; connections to New Jersey Transit, Amtrak and PATH; higher education institutions; a potent fiber optic network; and an impressive assortment of new and existing buildings.

Frank Giantomasi is a partner at Genova Burns Giantomasi Webster, a law firm that exited Newark decades ago, but then returned to the city nearly seven years ago. Giantomasi comments, “Ten years ago – 494 Broad Street – the building I had [originally] been in, was an empty building. Ten years ago, the sister building across the street – which is now occupied by the Newark Housing Authority – was empty. Ten or 12 years ago, the original NJ Bell building – the Verizon building across the street from us – was almost empty. Now, these buildings are brimming with people and business.

“Also, the Rutgers-Newark graduate school is putting talented young people with energy and ideas at the street level: These students are looking to buy food and other items. Therefore, local commerce is developing. Also, the ‘think tank’ of Newark is growing. I cannot believe the [good] initiatives that [President] Joel Bloom at [the New Jersey Institute of Technology], and the Rutgers Business School deans are doing to promote business and business communication in Newark.”

For confidentiality reasons, Giantomasi cannot mention his clients’ names, but he does say his law firm is helping to bring “new banks” to Newark, as well as “branded, flagship hotels,” and a “commercial office building.”

The Courtyard by Marriott hotel – opened in 2012 behind the Prudential Center on Broad Street – was the first new hotel in Newark in 40 years. The $35-million Tucker Development project included 150 hotel rooms, as well as street-level storefronts.

Of note, three long-term commercial leases totaling 53,000 square feet have brought 570 Broad in Newark to a milestone 85 percent occupancy this winter. The 200,000-square-foot, 15-story tower was just 20 percent leased in 2011, when The Berger Organization acquired a controlling interest in 570 Broad Street, LLC, the partnership that owns the asset.

In addition, Fidelco Realty Group is in the midst of several projects around the city. It says, “The company is constructing a new home for Cablevision’s offices in Newark as an extension of 494 Broad Street. The construction also includes the creation of structured parking and a shared lobby for Cablevision and the existing building. Near the Prudential Center, Fidelco has been rehabilitating several properties on Market Street with ground floor retail and loft apartments above. The project, called RockPlaza Lofts, is already home to Dinosaur Bar-B-Que and more than 20 loft apartments. Another building with more than 30 apartments is set to open in the first half of 2014.”

In yet another sign of Newark’s vitality, Panasonic of North America opened its new headquarters last September. The State of New Jersey reports that the “new, 337,000-square-foot headquarters is the first office tower to be constructed in Newark’s downtown in more than 20 years. With the support of the Christie Administration and the award of $102.4 million through the Urban Transit Hub Tax Credit Program, approximately 1,000 jobs are staying here in New Jersey. Panasonic Corporation of North America’s previous headquarters was located in Secaucus.”

Again, it’s not just large, commercial projects that are refurbishing Newark: Smaller retail projects such as Joe’s Crab Shack at 860 Broad Street – or Edison Street’s beehive of restaurant and nightlife entertainment – all combine to make the city more desirable on a round-the-clock basis.

Giantomasi says, “I think one of the biggest single impact moments will be when they cut the ribbon to open the new Prudential World Financial headquarters on Broad Street. That’s going to be one of the largest commercial complexes in the state, and it is going to place people with discretionary income right in the heart of our business, cultural and recreational center. It’s across the street from the new Military Park, which has just been redesigned.”

Not to be confused with Prudential the company, The Prudential Center entertainment arena opened in 2007, and it has since had approximately 12 million visitors. Hugh Weber, president of Devils Arena Entertainment and The New Jersey Devils, says, “The way we look at it is: The Prudential Center really needs to be the town square in terms of where people gather to celebrate the things that are great about this community, and the fact that world-class acts are coming to Newark. As people commute into Newark for our shows, we want them to stay and linger. We want them to have an experience that isn’t just parking their car in a lot or in a garage, running into our building, enjoying the show and then going home.

“We have been working very closely with the restaurants that are already here – with the hotels and other folks that are part of the ecosystem – to bridge the gap between what is here today, and what we believe will be here in just a few years.

“We believe that if we can program this building, and program this neighborhood with great content and experiences, then people who are currently coming to Newark just for a few hours will end-up staying longer. And we all win when that happens.”

Newark is also a “college town,” as it is home to New Jersey Institute of Technology, a Seton Hall University presence and Rutgers University-Newark. Nancy Cantor, the new chancellor at Rutgers University-Newark, tells New Jersey Business: “We really view ourselves as an anchor institution – a kind of hub on innovation, with faculty and staff and students who are working very collaboratively across public, private and non-profit sectors to think about the economic development of this city. And I view economic development through a broad lens. This includes neighborhood health and safety, and arts and cultural dynamics.”

Rutgers University-Newark has specific projects, including: supply chain experts collaborating with the city and others, to examine how to help the more than 400 area manufacturers; and Rutgers’ Center for Urban Entrepreneurship and Economic Development working with local businesses regarding social entrepreneurship and business entrepreneurship. In addition, Rutgers’ School of Public Affairs and Administration works on capacity building for non-profits within the City of Newark.

Newark’s Ironbound district includes the Ferry Street business area and Wilson Avenue, and is home to more than 200 restaurants. The district is one of Newark’s primary commercial generators, providing a significant portion of Newark’s gross municipal product.

Seth A. Grossman, executive director, Ironbound Business Improvement District, says, “Go to a restaurant and [you will] hear Spanish, Portugese, Brazilian and other languages being spoken; you can really get an experience, coming down here. In addition to the restaurants, you also have that [diversity] through the different shops that we have. But, I would say that our restaurants and our food producing capabilities are probably the biggest draw.”

Asked if Newark’s economic development projects are having a positive effect on the Ironbound district, Grossman replies, “The answer to that is absolutely. Because, quite frankly, we are the most accessible and hip place to be. Our brand is very simple, and it is very destination oriented: ‘Meet me in the Ironbound.’ And we chose that because that’s what everybody says: ‘I’ll meet you in the Ironbound. We are going to have this business meeting.’”

Where will Newark be in 10 years? Is it truly on a path towards continued greater heights in all areas? The general consensus is ‘yes,’ but many are hoping for the orderly transition of a new mayor, and for reductions in crime and poverty in certain areas of the city. Overall, positive developments in the city are progressing,

In broad terms, the Newark Regional Business Partnership’s Hallock summarizes, “As the market calls for more residential projects downtown, we are going to see them. And I think that demand will continue. I don’t think it’s going to be a case in which one day you come a year later and the city is dramatically changed. I think there are some very good things going on, and we want to continue that steady momentum, and that steady building. So, yes, in 10 years, I think Newark will be a much better place for people to be, and I think we are seeing those seeds sown, right now.”