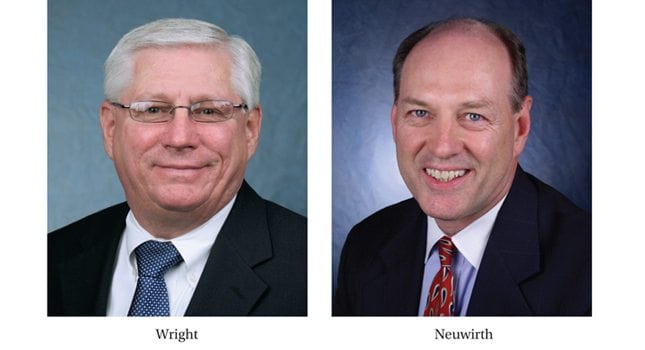 New Chairman, Vice Chairman for NJBIA Board of Trustees, NJM Board of Directors

Matthew L. Wright, president of Piper Holdings, LLC, has been elected Chairman of the Board of Trustees of the New Jersey Business & Industry Association (NJBIA) and the Board of Directors of NJM Insurance Group (NJM), and Brian F. Neuwirth, president of Unex Manufacturing, Inc., has been selected as Vice Chairman.

Wright, of Flemington, first joined the NJM and NJBIA Boards in 2000, serving as Vice Chairman since 2011. Based in Whitehouse Station, Piper Holdings is a commercial real estate and business consulting company for the trucking industry. Wright is also the retired president of Apgar Bros., Inc., of Somerset, a freight shipping and trucking company. Wright succeeds Douglas R. Kuiken, president of Kuiken Brothers Lumber Company, Inc., of Fair Lawn, as Board Chairman. Kuiken, of Wyckoff, will continue his service on the Board.

Neuwirth, of Brielle, has been a member of the NJM and NJBIA Boards since 2005. Unex Manufacturing, in Jackson, is an industry leader in gravity-operated roller conveyor systems.

Founded in 1913, NJM is a leading provider of personal automobile and workers’ compensation insurance in the Garden State, and a major carrier for homeowners, umbrella and commercial auto insurance. The Company operates in a mutual fashion and has paid more than $5.5 billion in dividends to policyholders — not stockholders — since 1918.

The NJM Board of Directors has promoted several employees to positions of increased responsibility and leadership. Listed below is a short biography of each employee along with the new title he or she holds. 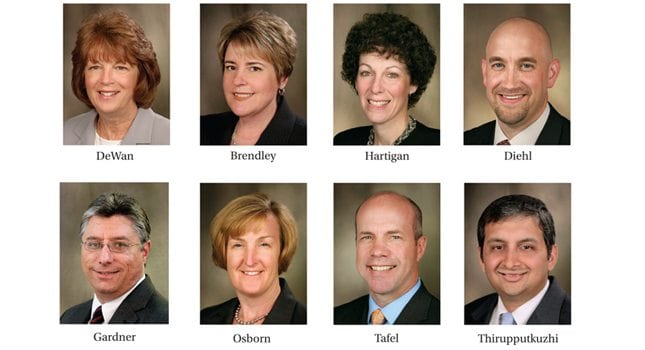 Anne Marie DeWan, of Yardville, hasbeen named NJM’s Vice President and Treasurer. After graduating from Trenton State College (now The College of New Jersey), DeWan began her career with the Company as an accountant in 1980. In 1986, she was promoted to Assistant Supervisor, followed by Supervisor in 1990. In 1997, she became manager of the General Accounting Department. She earned the rank of officer in 2001 when she was named Assistant Treasurer. Five years ago, she was elected to serve as Assistant Vice President and Controller. She has earned the designation of Associate in Insurance Accounting and Finance.

Lorene C. Hartigan is now Vice President of the Administrative Services Department. An alumnus of Rider University and resident of Lambertville, Hartigan joined NJM as a member of the Personal Auto Department in 1978, subsequently taking on the roles of business system analyst and Information Technology programmer. She was promoted to Assistant Secretary in 1996 and Assistant Vice President in 2005, first in Information Technology, moving to Administrative Services in 2006.

Ryan M. Diehl, of Lansdale, Pa., has been promoted to Assistant Vice President. Upon graduating from Lebanon Valley College with a degree in both Economics and Actuarial Science, Diehl gained experience in the actuarial field working at a number of companies before joining NJM in 2005 as a research actuary. Two years later, he became a Staff Manager in the Actuarial Department. In 2008, he earned the position of Actuary at the officer level.

Lawrence P. Gardner of West Orange, has been named Assistant Vice President of Information Technology. Gardner obtained a bachelor’s degree from American University and a master’s degree from Fairleigh Dickson University. He came to NJM in 2006 as an infrastructure technical leader for IT server administration.  Two years later, he was promoted to server technical leader for IT administration. In 2011, he was named Director of Information Technology.

William H. Tafel has been promoted to Director of the Workers’ Compensation Underwriting Department. Tafel, a resident of Chalfont, Pa., attended Indiana University of Pennsylvania. He joined NJM’s Customer Service Department in 1990 after holding various business-related positions. At NJM, he advanced through a number of positions before transferring to the Workers’ Compensation Underwriting Department in 1996.

Sanjay Thirupputkuzhi, of Plainsboro, has been named Director of the Program Management Office. Thirupputkuzhi received his master’s degree in business administration from New York University. Before coming to NJM, Thirupputkuzhi developed software solutions for the financial services industry. In 2005, he joined NJM as a lead solutions architect. Four years later, he became a business relationship leader. In 2011, he was promoted to Manager of the Program Management Office. He is also a certified Six Sigma Black Belt. Six Sigma is a set of techniques and tools for process improvement.

In addition to officers elected by the Board of Directors, Bernie Flynn, NJM’s President and CEO, has announced the following staff promotions: