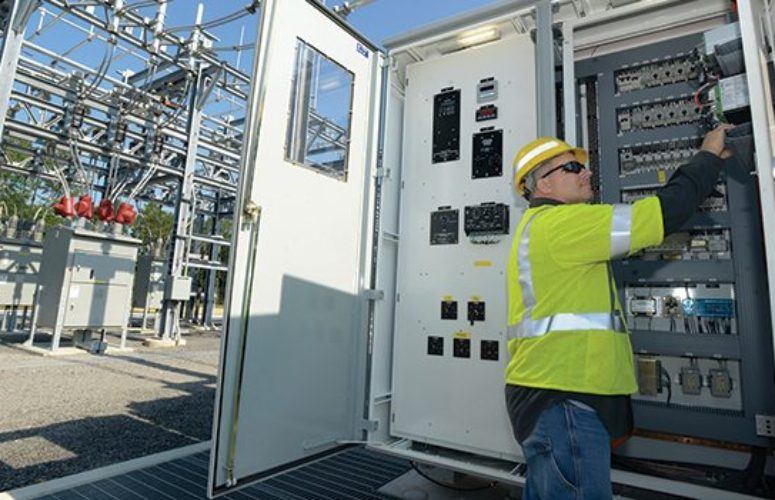 New Jersey’s utility infrastructures are among the oldest, most used and most complex in the nation. The state’s electric, gas, water and telecom companies have been investing millions, and even billions of dollars on infrastructure upgrades to provide better reliability and more resiliencies, among other improvements.

Since major storms Hurricane Irene in 2011 and Superstorm Sandy in 2012, the Garden State’s utility companies have realized how vital it is to implement sound infrastructures in order to reduce outages and provide the highest quality of service, especially in times of need. In this article, New Jersey Business takes a look some of the recent infrastructure upgrades from many of the top utility companies in the state.

In 2015, Jersey Central Power & Light (JCP&L) spent more than $247 million on infrastructure upgrades and expansions that include: a $37-million substation expansion in Wharton to install voltage regulating equipment; constructing a $7-million transmission line at a substation in Old Bridge; and the completion of $6 million of equipment upgrades on 94 circuits across the company’s 13- county service area, which serves approximately 1.1 million customers. The company also spent $24 million to trim trees along 3,300 miles of power lines in order to maintain proper clearance. It recently began construction on a new substation project in Monmouth County that includes building a new 16-mile, 230-kilovolt (kV) transmission line along existing construction to connect JCP&L substations in Howell and Neptune. In addition, an existing 230-kV transmission line connecting substations in Colts Neck and Neptune will be rebuilt using steel poles, which are more reliable in the event of a storm, instead of the current wooden structures. This project is part of a $250-million, multi-year transmission system reliability program JCP&L calls “Energizing the Future.”

“In 2015, we had our best service reliability in more than a decade and an 18 percent decrease from the previous year in the number of outages our customers experienced,” says Jim Fakult, president of JCP&L. “Electricity demands are constantly increasing and customer expectations continue to change, so we plan to keep up with that and to provide the level of service they expect and deserve.”

Public Service Electric & Gas (PSE&G) is in the midst of a three-year, $905-million gas modernization program to replace 510 miles of gas pipes and 38,000 service lines.

“The program is dedicated to replacing old, unprotected cast iron pipes in the ground with new plastic piping, which is less likely to leak and crack,” says John Latka, senior vice president of gas and electric operations at PSE&G. “The old infrastructure has been around for approximately 113 years, and we have 5,000 miles of cast iron and non-protected steel, which is the largest of such inventory in the US. So we are taking it one step at a time.”

On the electric side, PSE&G recently completed the first phase of a $1.2-billion Bergen-to-Linden corridor upgrade. When completed in 2018, the 345-kilovolt (kV) line will run from Ridgefield to Linden and will help maintain reliability and improve congestion.

In the aftermath of Superstorm Sandy, which impacted approximately 2 million of PSE&G’s customers, the company was approved by the New Jersey Board of Public Utilities (BPU) for a $1.22-billion “Energy Strong” program which projects included: $620 million to raise, relocate or protect 29 switching and substations that were damaged by water; and $350 million to replace and modernize 250 miles of low-pressure cast iron gas mains in or near flood areas, among other projects.

Approved in 2014 by the BPU, New Jersey Natural Gas’s (NJNG) $102.5-million New Jersey Reinvestment in System Enhancements (RISE) program is comprised of six projects that will “enhance the resiliency of its natural gas distribution and transmission systems and help mitigate the impact of major weather events in the future,” according to the company.

“After Superstorm Sandy, we had to shut a lot of customers off for four to eight weeks to get the system back up and running,” says Kathleen T. Ellis, NJNG’s CEO. “If we had a secondary feed, it would have decreased the number of customers that were out as well as the length of time. So, we had to make the investment to improve the safety, reliability and resiliency of the system.”

“New Jersey, like many other states in the northeastern portion of the country, has an aging utility infrastructure,” says Jeffery E. DuBois, president, SJG.  “In order to continue the provision of safe, reliable natural gas to homes and businesses, it is necessary to replace bare steel and cast iron mains and services with more state-of-the-art materials, such as plastic.  The current low price of natural gas makes this the right time to make these investments, while still keeping customer rates lower than they were 10 years ago.”

Atlantic City Electric (ACE) has a number of projects that include: the Orchard-to-Lewis Transmission Line Upgrade Project, which is a rebuild of an existing 41-mile line from 138 kV to 230 kV to ensure reliable service in parts of Atlantic, Cumberland, Gloucester and Salem counties; and the High Street Substation Project, a 69/12kV distribution substation in Woolwich Township, while upgrading two existing 34kV transmission lines to 69kV lines through the communities of Paulsboro, East Greenwich, Greenwich, South Harrison, Swedesboro, Pilesgrove and Woolwich.

The company has invested more than $716 million in system upgrades and expansions since 2011. It has recently filed a five-year, $176-million grid resiliency program called PowerAhead with the BPU for approval. PowerAhead’s planned projects include selective undergrounding of existing distribution circuits; constructing system ties to the barrier islands from the mainland; increased storm and flood prevention of substations and other equipment along the barrier islands; and increased system automation and remote control for faster and safer restoration.

“The state of New Jersey is very conscious of the fact that infrastructure needs to be upgraded,” says Vince Maione, president of ACE. “It has been very supportive and has been looking into programs [regarding] how these systems can become even more resilient. Our customers are experiencing 41 percent fewer outages, and restoration is about 25 percent faster compared to 2011. So, it’s proving to be worth the investment because we are starting to see the benefits of it.”

Under Elizabethtown Gas’s Safety, Modernization and Reliability Tariff (SMART) program, the company plans to invest more than $1 billion through 2027 to replace 630 miles of cast iron, unprotected steel and ductile iron and mains, 66,800 bare steel and copper service lines as well as 240 regulator stations associated with Elizabethtown Gas’s low-pressure distribution system. It also plans to install excess flow valves on all new service lines, and natural gas meters will be moved to the outside of homes and businesses as part of this program.

“Natural gas systems are infrastructure, just like roads, bridges and other public assets,” says Brian Mac-Lean, president of Elizabethtown Gas. “These assets are the backbone of the economy, and there are widespread economic and societal benefits to maintaining and enhancing critical infrastructure.”

Over the past five years, SUEZ has invested approximately $320 million in its water infrastructure in New Jersey. In 2014, the company began a $26-million dam safety upgrade project for the Woodcliff Lake Dam that has resulted in a safer structure, to “withstand a storm event that is equivalent to several times the intensity of Superstorm Sandy or Hurricane Irene,” says Steven Goudsmith, spokesman for SUEZ. The company installed a new $9-million electrical substation at its Haworth Water Treatment Plant to further ensure service reliability during severe weather conditions. Overall, the company has invested more than $60 million in projects that will enhance service reliability and help minimize outages. However, the largest portion of the investments made in the last two years has been to replace or upgrade underground assets like water mains, valves and service lines.

“The American Society of Civil Engineers graded the nation’s drinking water infrastructure a ‘D,’” Goudsmith says. “It is also estimated that New Jersey will require an investment of $7.9 billion into its drinking water infrastructure over the next 20 years. The quality of water has been a hot topic around the nation and SUEZ has been taking a proactive approach to make sure its customers get the cleanest and safest water, coupled with the most reliable service.”

According to Leecia Eve, Verizon’s vice president, state government affairs for the New Jersey, New York and Connecticut region, the Basking Ridge-based company invests, on average, $16 billion to $17 billion a year to upgrade its wired and wireless infrastructures nationally, with “approximately $1 billion of that upgrade for New Jersey’s infrastructure,” she says.

Verizon has deployed its fiber optics services (Verizon Fios television and Internet) to approximately 380 municipalities throughout New Jersey covering more than 2 million homes and businesses since 2014. While the company is still dedicated to its wired networks, its recent focus has been upgrading its wireless technology and infrastructure. Verizon is currently testing wireless and fixed wireless 5G technology in five cities throughout the US, including Piscataway, Bridgewater and Basking Ridge. During these tests, speeds for 5G have reached up to 1.8 Gbps, approximately 50 times the rate of current fast 4G wireless connections today. Fixed wireless is a way to beam 5G signals into homes and businesses that may not have a direct fiber optic connection. The company hopes to roll out fixed wireless pilots in 2017.

Between 2013 and 2015, AT&T invested $1.55 billion in more than 560 upgrades to its wireless and wired networks in the state. In 2015, the company acquired satellite television giant DIRECTV for $49 billion and has “big plans” to provide the ability to access and stream DIRECTV video services over a wired or wireless Internet connection from any provider and from virtually any device – smartphone, tablet, Smart TV, streaming media hardware or PC, according to Michael Schweder, president, AT&T Mid Atlantic. AT&T Labs Advanced Technologies – with locations in Bedminster and Middletown – is also pushing innovations by creating technologies in data analytics, cloud services, intelligent systems, and networking and service quality management.

“Data traffic on AT&T’s national mobile network increased more than 150,000 percent from January 2007 through December 2015,” Schweder says. “The investments we’ve made drive a wide range of upgrades to reliability, coverage, speed and overall performance for residents and businesses. They also enhance critical services that support public safety and first responders.”

These projects are just a small portion of the investments electric, gas, water and telecom companies have made – and are continuing to make – in New Jersey’s aging infrastructure. Improving and upgrading these essential networks are necessary to support the companies and individuals that all call the Garden State home.