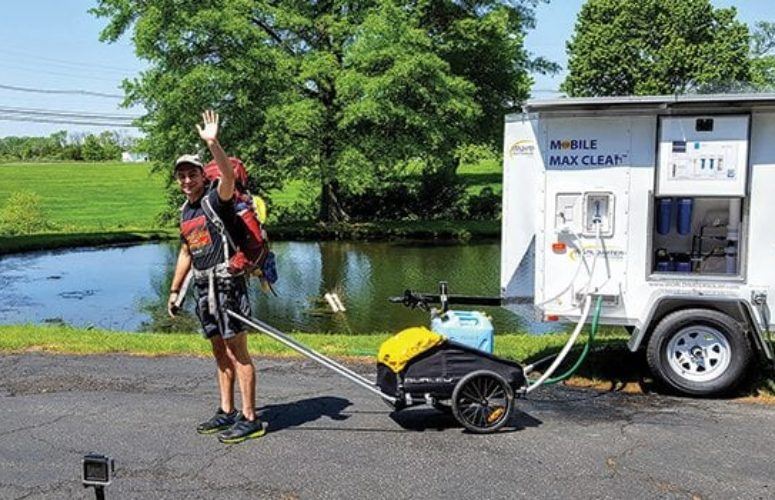 James Leitner on the first day of his 3,215 mile journey. The launch event on May 17, 2017 was at WorldWater & Solar Technologies’ technology center in Princeton.

Today, it is estimated that 783 million people lack access to safe drinking water worldwide. In many places, it is women and children who are tasked with locating, collecting and carrying river water several miles each day home to their families.

This daily struggle for something that is a necessity and taken for granted by so many, caught the attention of Scotch Plains native James Leitner several years ago while he was conducting research for a high school project. This sad, but very real, worldwide water issue struck a chord with Leitner, and as a result, he eventually decided to embark on an unconventional and inspirational journey.

On May 17, the 23-year-old began a 3,200 mile trek (on foot) across the United States – one in which he will walk from WorldWater & Solar Technologies in Princeton to the Golden Gate Bridge in San Francisco, all while pulling 90 pounds of water to symbolize and raise awareness for the women and children who struggle to provide their families with clean water for everyday tasks such as drinking, bathing and cooking.

Before setting out on his current journey, Leitner had previously completed 12 separate marathons while carrying 45 pounds of water on his head, which helped to build up a social media following and attract attention to his goal. WorldWater & Solar Technologies was one company that took interest in what Leitner was doing, and has since supported him by providing assistance and raising awareness on its own.

“[I felt that] a cross country trip would be another symbolic way [to raise awareness] as well as open new doors to doing more ‘developing country projects’ in the future,” says Leitner, who also has a goal to raise $75,000 through GoFundMe.com to help the Philadelphia Serengeti Alliance, a nonprofit organization working to improve health, education and gender equality by providing accessible clean drinking water to the Mara Region of Tanzania.

“Through this trip, I am additionally trying to raise donations, and the goal is to be able to raise enough so that I can travel to Tanzania [for the second time] to show donors what their contributions have been going towards and be able to see the money working on the ground,” Leitner says.

At the time he spoke to New Jersey Business in July, Leitner was in Iowa, more than 1,000 miles from where he began. So far, he says the summer heat has been one of the biggest difficulties. “Physically, I haven’t had any big issues aside from some blisters. … Mentally is the biggest challenge, though I’ve been able to stay strong even through the heat. It’s just a matter of staying positive, considering it’s only going to get hotter.”

Leitner plans to complete his trek later this month, ending at what he calls “the iconic end point” at the Golden Gate Bridge. “My mission is to help to provide people of the globe with clean drinking water,” he says. “[Water] is something that we don’t think about until it’s taken away, and it’s absolutely necessary for everything.”