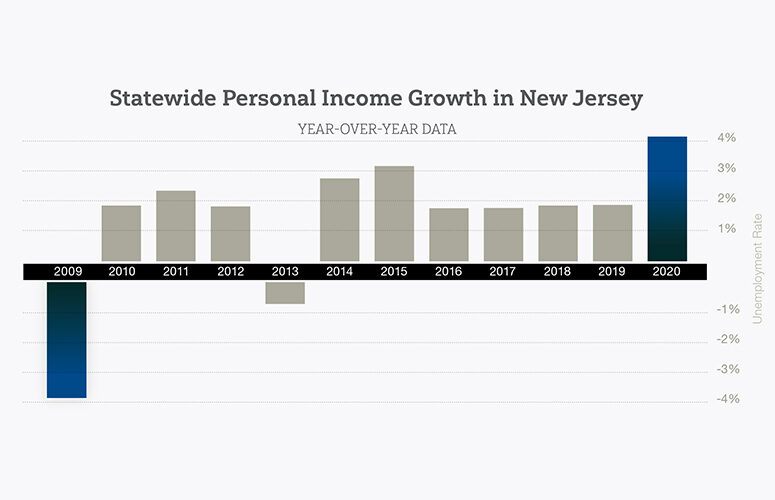 New Jersey has the third highest unemployment rate in the nation, according to the Bureau of Labor Statistics’ October data release. Yet, thanks to an unprecedented influx of government assistance during the pandemic, total personal income in the state is up 3.4% since the end of 2019, according to an analysis released by the Pew Charitable Trusts in November.

According to Pew, approximately half of all personal income in the United States comes from salaries and wages. Although unemployed workers continue to generate some income through government assistance and other forms of earnings, the loss of wages during periods of rising unemployment depresses the state’s total personal income. When those workers resume employment en masse, the state’s personal income recovers or grows.

During the pandemic, however, unemployed workers saw their incomes supplemented not only by traditional state unemployment programs, but by federal stimulus checks, expanded benefits, and other forms of aid instituted to offset the pandemic’s economic consequences. As a result, the correlational relationship between the number of unemployed New Jersey workers and personal income in the state has been nearly nonexistent since the second quarter of 2020.

Instead, spikes in personal income throughout the pandemic tend to appear in quarters when many Americans were receiving federal stimulus payments. Following the CARES Act in March 2020, personal income in New Jersey increased more than 40%. A similar surge is seen in the first quarter of 2021 following the passage of the American Rescue Plan.

Personal income is just one way to measure the state’s fiscal health and the financial condition of its residents. However, the pandemic’s interruption of previously predictable relationships is a reminder of why it’s important to understand how these figures are produced, and how single data points relate to broader trends.