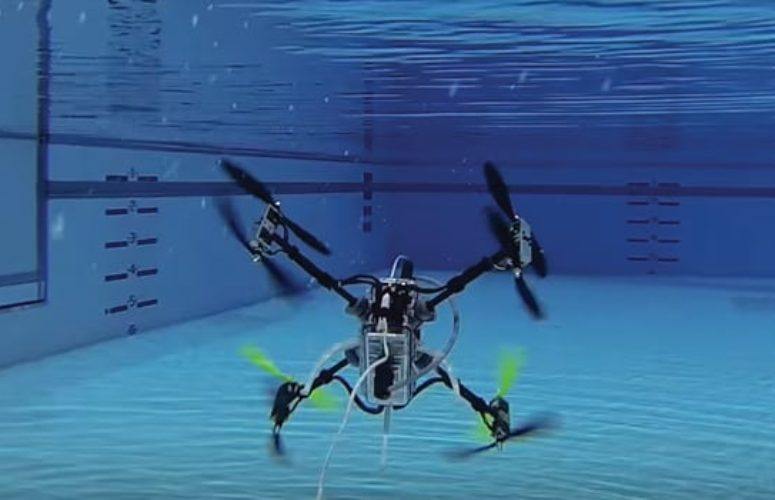 When you think about a drone, you probably picture an odd looking object hovering, buzzing and zipping around through the air. You may even picture a time in the not-so-distant future where drones are dropping off that package you ordered from Amazon right on your front doorstep. Today, anyone can go to their local retail store and buy a cheap drone, and start flying it in their backyard.

While drones continue to gain popularity for their numerous uses, Javier Diez, a Rutgers University professor in the Department of Mechanical and Aerospace Engineering – with the help of several graduate and undergraduate students – has developed a drone that not only can flawlessly navigate in the air, but is equally adept at navigating while fully submerged in the water.

Beginning as an undergraduate senior project in 2013, the submersible drone – dubbed the Naviator – originally utilized an inflatable ring that would bring the drone to the surface after being submerged, allowing it to take off into the air. The project was well received, but Diez felt that it wasn’t quite practical, given the complexity of the original design.

After shelving the Naviator for a short time, determined student Marco Maia convinced Diez to revisit the project.

“[Eventually] we came up with the idea to use a duel propeller system,” Diez says. “This turned out to be the breakthrough that we needed. When you have two propellers on each arm [of the drone], once you get to the surface of the water, one propeller is pushing you up, while the other is pulling you up [into the air].”

This design ensured that regardless of the conditions in the water, the drone would always be able to get out of it and into the air successfully.

The uses for such a drone are abundant and, according to Diez, include the ability to perform underwater inspections of bridges, ships and ports; aid in oil and gas operations in the sea; and help with search and rescue missions. In fact, Rutgers received funding from the Office of Naval Research for the Naviator’s development, and the drone has generated plenty of interest for its potential military applications.

The Naviator successfully performed an underwater bridge inspection at the Delaware Memorial Bridge’s twin spans last June, and was also showcased as a cutting-edge technology at the 2017 Naval Future Force Science and Technology (S&T) Expo in Washington, DC, last July.

“When we talked to the Navy, I heard them saying ‘Wow, we’ve only seen this in the movies. We didn’t think this was possible. We need this,’” Diez recalls. “That’s when we got our funding.”

Additionally, the Navy said that it wanted to see a path to commercialization, which led Diez to start the company SubUAS LLC in 2016. The company has an exclusive license for the commercial/military development of Rutgers’ patented air/water drone technology, and has created even more possibilities for the advancement of the technology.

“We currently are working on another model that would be able to carry up to 30 pounds in pay load,” Diez says. “In the future, I can see something [big enough] to even carry people.”

Bringing Labor and Business Together to Build a Better New Jersey