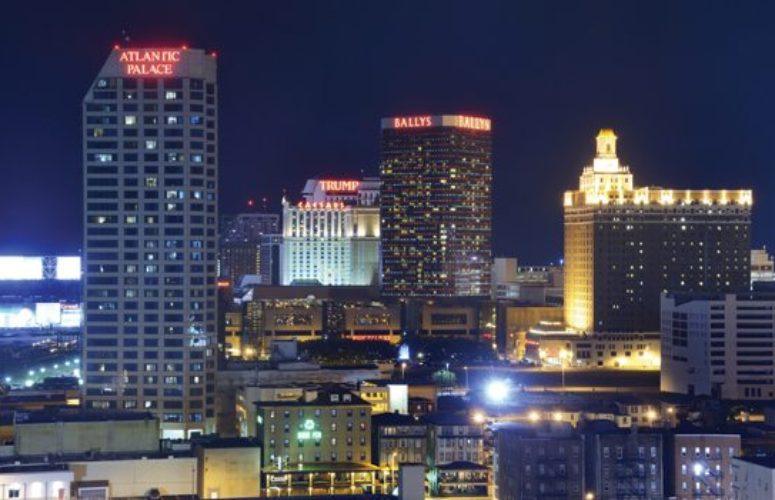 A bright skyline, but a dim future? Atlantic City is trying to reinvent itself as a family, convention and meeting, sports and overall hospitality destination. (iStock Editorial, Thinkstock)

Steady progress and a challenging transformation.

Southern New Jersey has a varied economic base. Tourism, strong educational and medical (Ed/Med) sectors, agriculture, a highly developed maritime, distribution and transportation infrastructure, are all in place here.

These days, the economies of most of the eight counties in the region, while still not fully recovered from the Great Recession and a nasty brush with Hurricane Sandy, are showing uneven, but modest and steady, improvement in employment, investment and some other economic measures. The Third Quarter 2014 Southern New Jersey Business Survey, prepared by the Federal Reserve Bank of Philadelphia, for example, found “improvement in overall business conditions.” Sales and employment both improved from the Fed’s second quarter readings, and the firms surveyed generally forecast continued growth in the following six months. However, they were less optimistic when it came to employment in that period.

The challenges to economic development in South Jersey are nonetheless significant. The most serious and publicized of these challenges is related to casino closings in Atlantic City and its negative ripples for the entire region.

Atlantic City’s economic angst in recent years has been exhaustively chronicled. For decades after New Jersey voters approved a referendum allowing casino gambling in Atlantic City in 1976, the city enjoyed a monopoly on legal East Coast gaming and trailed only Las Vegas as a national legal gaming destination.

That monopoly subsequently ended. There are 20 casinos already licensed or in the process of being licensed in neighboring states like New York and Pennsylvania, many of them within a three-hour drive of Atlantic City. All around the country, there are clear signs of gaming market saturation. The resort’s own gaming revenues, which peaked at $5.2 billion in 2006, fell to $2.86 billion in 2013 and fell further in 2014. Today, experts in the field hope these revenues will at least stabilize at a $2-billion-a-year level.

The effects of these difficult realities for the city and county have pyramided. By the end of 2014, four of Atlantic City’s 12 casinos had closed (The Atlantic Club, Revel, Showboat and Trump Plaza).

Job losses in the Atlantic City region in 2014 numbered 9,900, according to the US Bureau of Labor Statistics. Ripples of economic pain were being felt in local spending, housing, services and the tax base.

To meet the expected downturn, the state came up with a five-year plan in 2010. Now in its fourth year, it has been supplemented by other legislation, by planning and programs run by various state agencies and commissions, and by initiatives from educational institutions and non-profits.

Though there is still a long road ahead, the ultimate goal is clear: “It is simply to make Atlantic City less dependent on gaming and create a complete hospitality, tourist, convention and meeting destination, plus attract other industries, as well,” Palmieri says.

To date, the CRDA has attracted and completed more than $700 million in projects, with another $475 million in progress. Some recent retail projects include a $34-million Best Of Bass Pro outlet set to open in 2015, and the $70-million Margaritaville, which opened in 2013. Residential developments currently underway include the $30-million Boraie residential/mixed use project.

Some of Atlantic City’s surviving casinos are also expanding. Among the projects are a $35-million, four-phase expansion by Tropicana expected to be completed in late 2015, and Harrah’s $126-million conference center to be completed in 2015. In late 2014, the Borgata Hotel Casino and Spa announced it will be conducting its own $13-million property-wide renovation. Future reuse opportunities for educational and medical institutions in presently unused casino rooms and infrastructure have also begun to attract growing interest.

As for the Revel Casino and Trump Taj Mahal, there may be saviors in the midst. Last month, Florida real-estate developer Glenn Straub purchased Revel for $95.4 million. A Wall Street Journal report said he has a $500-million plan to turn “blighted Atlantic City into a family-friendly destination that would include a waterpark, Ferris Wheel, a man-made mountain for skiing and snowboarding and a soccer franchise.”

At the end of December, investor Carl Icahn loaned Trump Entertainment Resorts $20 million to keep the Trump Taj Mahal open while it tries to revamp a Chapter 11 plan.

One non-gaming area in which Atlantic City is aggressively seeking to promote its economic revival is with conventions. “Conventions have a long history here. Old Boardwalk Hall, the country’s first convention center, opened in 1928,” says Jim Wood, CEO of Meet AC, a private non-profit sales organization created to boost the city’s meetings and convention business. Wood took over his new post in June 2014.

Conventions were a big business here until the focus became so strongly on gaming, he explains. “Now that the gaming model is half of what it used to be, the city is looking more at a meetings and convention model.”

Exclusive of the additional gatherings hosted by Atlantic City’s large mega-hotels, there were 102 meetings and conventions in the city during 2014. “We’re hoping for 15 to 20 percent growth next year,” Wood says.

It’s an ambitious goal. Just as competition is stiff when it comes to gaming, it is for the convention trade, as well. There are 59 convention centers in the Northeast US competing for Atlantic City’s target fly-drive convention market. Wood thinks the city’s state-of-the-art convention center, however, which can handle conventions that need up to 500,000 square feet, and is big enough to handle 80 to 85 percent of all conventions nationally, can match the competition. With four mega hotels with 2,000 or more rooms, shopping, entertainment and gaming attractions plus a beach, Wood sees real opportunities for non-gaming convention growth in years to come.

Though Atlantic City is still South Jersey’s biggest tourism draw, attracting 27 million visitors annually, other parts of the region are no slouches in this regard. Cape May, with its unique blend of history, culture and ecology, attracts 19 million visitors a year. Tourism here has been boosted by facilities like the Cape May Convention Hall, which was dedicated on Memorial Day 2012, and, this past year, hosted a number of well attended concert events.

Along with tourism, healthcare is one of the biggest economic industries and major employers in South Jersey. To a large extent, changes in this industry’s development patterns are governed by forces outside the region or even the state.

The Affordable Care Act, for example, has led to many individual physician practices being acquired by larger institutions. There have also been healthcare consolidations, such as the 2012 merger of South Jersey Healthcare and Underwood-Memorial Hospital, which became the Inspira Health Network. Inspira, with some 5,000 employees, now has 60 facilities in Cumberland, Gloucester and Salem counties.

Along with consolidation, another driver of economic development patterns in healthcare in South Jersey and elsewhere in the country is a changing patient care emphasis. “We’re moving away from the pay for treatment [pay for services] model to an outcomes model,” says John A. DiAngelo, president and CEO of the Inspira Health Network. It’s a model focused more on keeping people healthy rather than curing them after they get sick.

With Medicare enrolling 8,000 new seniors a day, such a change has become an economic necessity and done much to reshape healthcare development, generally. Inspira, for example, has a growing number of medical fitness centers where data from an individual’s workout can be fed into his or her medical records.

Inspira also opened three new acute care centers in 2014, and now has five in all. Such centers specialize in another current health focus – short-term care for complex injuries or illnesses, as contrasted with chronic care.

Part of “Ed/Med” (educational facilities and medical facilities) growth in South Jersey has involved the former creating programs to fill the employment needs of the latter. A good example is Rowan College of Gloucester County’s allied health and nursing programs, which have been expanded in recent years to meet the evolving needs of local healthcare providers.

Healthcare isn’t the only South Jersey economic sector having its economic development strongly shaped by outside forces. In the case of South Jersey Gas, a regional natural gas utility, a prime reshaper is growing supplies of natural gas from Marcellus shale deposits, mostly found in neighboring Pennsylvania.

“The domestic availability of low cost natural gas,” notes Jeffrey E. DuBois, president of South Jersey Gas, “which has increased substantially over the past several years due to the discovery of vast shale deposits in neighboring states, is helping to fuel the regional [South Jersey] economy. … As the industry grows close to home, South Jersey Gas is benefitting from numerous initiatives that are helping to drive the business forward.”

Among the initiatives DuBois cites: “We’re completing infrastructure improvement projects at an accelerated rate and we’re implementing compressed natural gas vehicles into our operations, along with a fueling infrastructure. … We see this as a key growth area.

One important measure of economic development is real estate activity. And in Burlington, Gloucester and Camden counties, key components of the real estate market finally seem to be pulling out of their Great Recession doldrums.

Certain sectors are outperforming others in this tri-county area. Retail, for example, is coming back faster than the office sector. There’s new retail development all along the major corridors, Routes, 70, 73 and 38, though small businesses along these roadways seem to be losing out to big box retailers and high-end restaurants.

While Camden’s retail and office sectors are performing less well than Gloucester’s and Burlington’s, Jason M. Wolf, principal at Wolf Commercial Real Estate, says that there are nonetheless real signs of improvement in Camden. “The city has taken advantage of its opportunities and taken some very positive steps,” he says. “There’s positive momentum here.”

Positive momentum when it comes to both Atlantic City’s economic reset and Camden’s own gradual renewal has been heavily promoted by state government. A series of tax and other incentives aimed at promoting non-gaming economic activity in Atantic City have been passed since 2010. A recent one designated the resort city as the state’s fifth Garden State Growth Zone, which qualifies it for a number of generous state-supported incentives. Still another new package of aid was proposed in December 2014 that would further help the city’s government, casino industry and schools.

Very generous tax breaks and incentives have also worked to promote development in Camden. They were critical to attracting the Philadelphia 76ers basketball team’s new practice and administrative facilities and convincing Holtec International, a high-tech equipment manufacturer, to relocate there as well. In December 2014, another major addition to Camden’s economy was finalized when Subaru of America confirmed it would relocate its own new corporate headquarters to Camden from suburban Cherry Hill.

In recent months, it has often been easy to view the eight-county Southern New Jersey economy through a single lens — Atlantic City and its difficult transformation from a gaming industry-dependency to a more varied and sustainable economic model. However, there are many economic stories in the region that are worth telling.

Increasingly, it’s becoming a better place to grow numerous other businesses, as well.