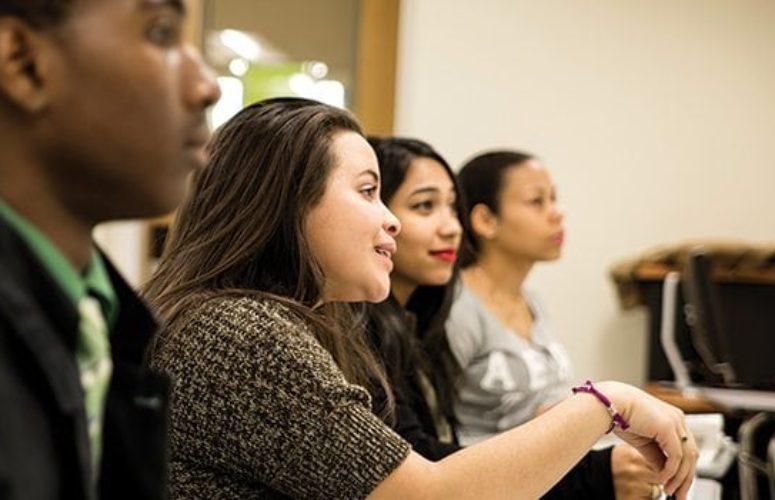 The Case for Multicultural Campuses

Diversity in higher education benefits everyone.

Student populations and faculty at universities and colleges across the state comprise not only bright minds born and raised in New Jersey, but from abroad as well. Institutions of higher education in this state can see a broad array of ethnicities, cultures, nationalities, genders and faiths represented on campus – setting the stage for a more dynamic workforce and economy in the years to come.

Schools such as Berkeley College, New Jersey Institute of Technology (NJIT), Montclair State University, Kean University, and Rutgers University are obviously situated in one of the more well-traveled quadrants of the country. That opens the door to attracting and recruiting more people from diverse backgrounds to be part of such institutions, who eventually graduate to enter the working world. Today’s college student may become tomorrow’s manager or chief executive. Therefore, efforts to make universities increasingly inclusive can influence the long-term economy.

One way universities here nurture diversity is to invite students from overseas to join their student bodies. Last year at Berkeley College, for instance, some 700 students from nearly 80 different countries came to study, says Manuel Correa, professor with Berkeley’s Larry L. Luing School of Business. He is the academic head of the school’s noncredit international program.

Correa says the college’s inbound study abroad program works with 22 international colleges to bring students from overseas to stay for one semester at Berkeley. The presence of international students on campus, combined with international business curriculum, helps develop a more inclusive-minded workforce. “Businesses are looking for that global flavor,” he says. “They want to do global outreach and expand. We’re getting our students ready for that.”

Dallas Reed, Berkeley’s vice president of student development and campus life, says exposure to individuals from different backgrounds in higher education, can better prepare students to work side-by-side with people from a broad spectrum. Outside of the classroom, Berkeley students also participate in the Respect Week celebration, held in the fifth week each semester. “This is an opportunity to talk about civility and differences that do exist,” Reed says. “If we can ground our students in the fundamental trait of respect, it embodies the beginning of embracing diversity.”

In New Jersey, some universities see diversity and ongoing efforts for inclusivity as part of their heritage. Karen Pennington, vice president of student development and campus life with Montclair State University, says diversity is part of the school’s DNA. “Many students come to the university because of that,” she says.

Although New Jersey is home to a broad array of people, there are homogenous communities within the state that see little exposure to people of different backgrounds. Attending a university such as Montclair is a way to engage in a world that is increasingly more heterogeneous, Pennington says. In April, the university hosted a World’s Fair Day with cultural and ethnic student organizations and university departments participating. The event demonstrated what having a global perspective brings to the table.

Recruiting students and faculty from overseas to study and work here can cultivate intellectual bonds that further improve foreign relations, says Binod Khadria, chair of contemporary Indian studies at Rutgers School of Management and Labor Relations. Large numbers of international students remain and settle down in the US, he says, after they graduate, and, in spirit, can be ambassadors between their native country and this one. “That can lead to healthy trade among countries,” Khadria says. “Instead of creating war, you create alliances.”

The breadth of higher education is becoming more globalized, says Jeffrey Toney, provost and vice president for academic affairs with Kean University. “It’s very important to give students perspective beyond their own neighborhoods and communities,” he says. Kean’s global MBA program, for instance, has a requirement for students to complete an international internship at a company, either in Europe or other locations such as South America and Asia. “That greatly enhances their ability to get a good job in business by showing that global perspective,” Toney says.

Prior to attending college, many students spend their lives in the same local community. Lack of exposure to different ways of thinking and customs can hinder them. Classrooms that are more homogeneous, he says, tend to be less creative and insular. Kean University shakes up that status quo.

Toney says the majority of students at Kean University are first-generation Americans and the school ranks among the most diverse in the country. It is also operates a full academic site in China – Wenzhou-Kean University – that confers American college degrees. “That’s resulted in a rich exchange between students who were born and raised in China and study in New Jersey, and vice versa, with New Jersey students studying over there,” he says. Some 1,600 students attend Wenzhou-Kean University, which is now in its fifth year.

Inclusivity and diversity have long been significant parts of NJIT as well. “We’re approaching 40 percent of our student body being of underrepresented minorities or other protected class groups,” says Charles Fey, vice president of academic support and student affairs at the institute. Some 20 percent of all student groups are from diverse populations and 18 percent of the student population is international, with 87 countries represented.

Students from overseas who attend NJIT can benefit from experiencing American culture, he says, and likewise enhance domestic students’ abilities to understand what it means to work in the global community. “We have students who may one day run international conglomerates and have to interact on a daily basis with people from all over the world,” Fey says.

Living and studying among people from different cultures and backgrounds helps to avoid groupthink in the classroom, he says – a phenomenon where one mindset dominates and drives everyone towards conformity rather than creativity. Attending universities with diverse populations “is a benefit that students can’t get in any other capacity,” Fey says.

Despite the advantages of diversity, there are some international “hot button” issues that universities cannot escape. With the political tussles at the national level, international students may have concerns about obtaining visas as well as travel to and from the United States. “It has had a distinct impact on universities across the country in recruiting international students,” Fey says, “particularly from India, China and the Middle East – in countries under the ‘ban attempts.’”

The intense political climate has led to colleges and universities providing students, as well as faculty members who are from overseas, with information and advice. Fey says NJIT has held focus groups and education programs on what to do if they travel outside the US. Furthermore, students are offered help to prepare for their visa interviews.

Encouraging diversity in gender in higher education naturally influences the composition of future workforces, from professionals on staff through management. That opens up more opportunities to greater parts of the population. “The full purpose of education is not just to promote good global citizens, but people who are able to contribute to our economic development as well,” says Terri Boyer, executive director with the Center for Women and Work at Rutgers School of Management and Labor Relations.

Her center reaches out to women in underrepresented fields to help them break barriers in their vocations and develop social capital in the workforce that may help their careers thrive. “We’re looking to serve a fully diverse population and also to have a population that is able to give back and grow the economy for the next generation,” Boyer says.

That effort includes hearing different opinions to have layered discussions on topics such as whether or not there is a pay gap among genders. Though the student body and faculty at the university are diverse, she says there is still room for increased representation. The narrow pathway that exists to become a professor, for example, can hinder diversity in faculty. Rutgers is taking proactive steps in the early parts of the pipeline to encourage a broader mix of such candidates. “It’s in our vested interest to make sure we don’t just have a white, male professoriate,” Boyer says.

Gender, ethnicity and economic standing may all influence the opportunities available to college candidates, which, in turn, may affect future job prospects. Heather McKay, executive director at the education and employment research center, Rutgers School of Management and Labor Relations, says community colleges are opportunities for students from all walks and economic strata to get on the path to a university-level education. “It’s a great way for people of lower economic backgrounds to find an opportunity to learn, engage and maybe take the next step to transfer,” she says.

The Bridging the Gap scholarship program at Rutgers University–Camden helps New Jersey residents break through financial barriers that might otherwise hold them back from being students, says Chancellor Phoebe Haddon. The program provides merit-based, supplemental support to state and federal education grants. For some students, the program covers full tuition; for others, it covers 50 percent of tuition. “Some of our students were carrying two or three jobs, and concerned about increasing debt as a result of the cost of tuition and fees,” Haddon says. “This is a way of eliminating those concerns for a sizeable population.”

By embracing diversity, higher education in the state tries to better reflect the population it serves. There is an inevitable demographic shift underway in the state, says Jorge Reina Schement, vice chancellor of diversity and inclusion for Rutgers University. “New Jersey is on target to become a minority-majority state, if not by 2020 then pretty soon thereafter,” he says.

Ignoring such demographics, he says, would be a disservice to the state as more cultures, nationalities, and ethnicities populate New Jersey. Furthermore, without being introduced to diverse people in college, students who come from high schools that lack diversity may be ill prepared to work in a broader community. “We recruit internationally because it adds to the intellectual mix of the university,” Schement emphasizes. “Students tell us that they will be more effective in a more diverse world if they come to us now and learn.”

State of Diversity: In Pursuit of Good Health for All New Jerseyans

NJ Releasing Guidance for the Reopening of Colleges and Universities