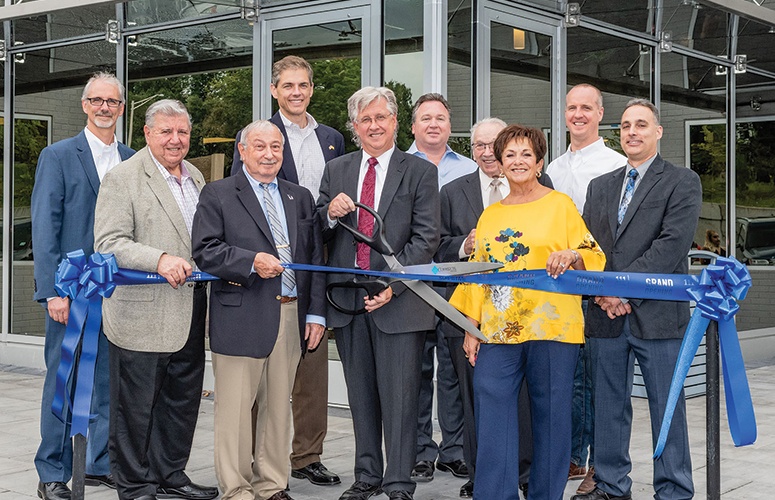 Big ideas to be had at 111 Littleton Road.

With a penchant for acquiring older, Class B office buildings and bringing them up to class A status, Commercial Realty Group (CRG) and partnering firm Corporate Contracting Inc. (CCI) debut 111 Littleton Road in Parsippany, a three-story, 36,000-square-foot office building strategically located at the crossroads of I-80 and I-287.

CRG acquired the 42-year-old building in 2016 for $1.2 million and invested approximately $2 million in upgrades, with design work accomplished by Harding-based Kimmerle Newman Architects.

Mike Walsh, president and CEO of CCI, says the building was completely gutted to its shell and core. “There was nothing left except for the concrete bricks. We revitalized everything with new windows, elevators, an HVAC system and everything else that is needed to make a Class A facility,” he explains.

Spaces at 111 Littleton Road can be divided into 1,200- to 1,500-square-foot plans in an effort to attract small businesses, which Walsh calls the “lifeblood of the economy.”

Already making its home at the recently opened building is Strategic Micro Systems, and the New Jersey Chapter of the Cystic Fibrosis Foundation. CRG and CCI are also headquartered at the location.

Space is still available at the facility, with Walsh saying the entire third floor, at 12,000 square feet, would be ideal for a single tenant. The average rent at the site is $20 per square foot, which is $4 less than other class A space in the Parsippany area, according to Walsh.

He adds that the Class A building is uncommon for its small size. “A boutique-type building at 36,000 square feet just doesn’t happen. Usually buildings like this are raised and condos are built in their place.

Andrew Billing, general manager of CRG, explains that CRG, CCI and Commercial Electrical Contracting, Inc. (CEC), another partner – all located at 111 Littleton Road – have been working together for some 27 years.

CRG owns 1.5 million square feet of office and industrial space throughout New Jersey. Billing says the company’s sweet spot is buildings that offer 80,000 square feet or more. “111 Littleton Road is smaller, but it fits us very well,” he said. “We basically look for properties that need to be renovated and re-tenanted.”

Walsh says of his partner, “Andy buys things nobody else will touch because they are afraid of them. With our in-house expertise (developer, contractor and electrical firm), Andy is brave enough to jump in because we can figure out how to get it [renovations] done.”