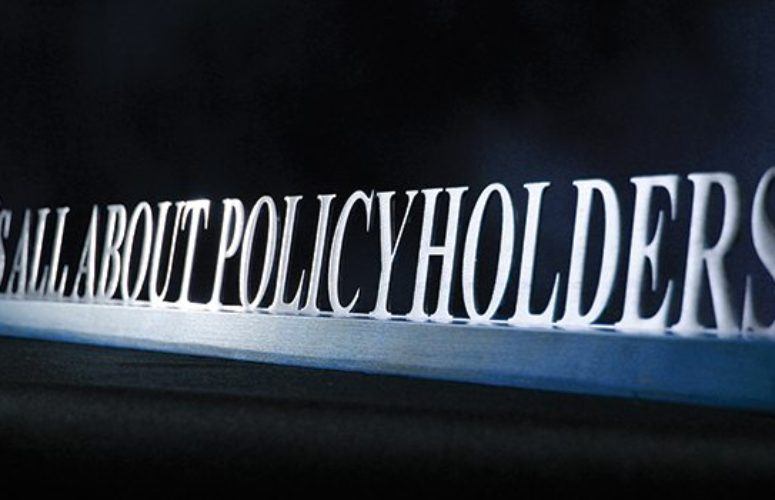 NJM – A Legacy of Safety, Dividends and Service 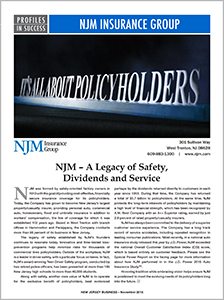 NJM was formed by safety-oriented factory owners in 1913 with the goal of providing cost-effective, financially secure insurance coverage for its policyholders. Today, the Company has grown to become New Jersey’s largest property/casualty insurer, providing personal auto, commercial auto, homeowners, flood and umbrella insurance in addition to workers’ compensation, the line of coverage for which it was established 102 years ago. Based in West Trenton with branch offices in Hammonton and Parsippany, the Company conducts more than 98 percent of its business in New Jersey.

The legacy of safety established by NJM’s founders continues to resonate today. Innovative and time-tested loss-prevention programs help minimize risks for thousands of commercial lines policyholders. Outside of the workplace, NJM is a leader in driver safety, with a particular focus on teens. In fact, NJM’s award-winning Teen Driver Safety program, conducted by two retired police officers, has been presented at more than 185 New Jersey high schools to more than 40,000 students.

Along with safety, another core value of NJM is to operate for the exclusive benefit of policyholders, best evidenced perhaps by the dividends returned directly to customers in each year since 1918. During that time, the Company has returned a total of $5.7 billion to policyholders. At the same time, NJM protects the long-term interests of policyholders by maintaining a high level of financial strength, which has been recognized by A.M. Best Company with an A++ Superior rating, earned by just 2.9 percent of rated property/casualty insurers.

NJM has always been committed to the delivery of a superior customer service experience. The Company has a long track record of service accolades, including repeated recognition in leading consumer publications. Most recently, in a national auto insurance study released this year by J.D. Power, NJM exceeded the national Overall Customer Satisfaction Index (CSI) score, which is based entirely on customer feedback. Please see the Special Power Report on the facing page for more information about how NJM performed in in the J.D. Power 2015 Auto Insurance StudySM.

Honoring tradition while embracing vision helps ensure NJM is positioned to meet the evolving needs of its policyholders long into the future.