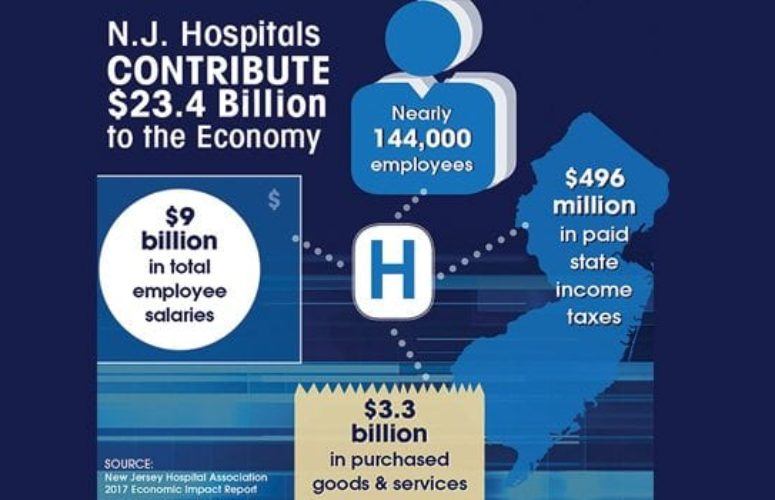 Add in the state’s 358 nursing homes and the total grows by an additional $5.6 billion in economic benefit.

“Healthcare matters in New Jersey – first and foremost, to take care of our families and our communities. But that essential work is also a bedrock of our economy,” says NJHA President and CEO Cathy Bennett. “Our members – hospitals, health systems, nursing homes and other providers – are some of the largest employers in the state, not only providing quality care to their communities and supporting community health and wellness, but contributing to the financial strength and producing jobs people are proud to do.”

The 2017 N.J. Hospitals Economic Impact Report, produced by the NJHA, is available at www.njha.com/econimpact2017.

The data shows that NJ’s hospitals and health systems saw employment increase to nearly 144,000 jobs in 2016 (the most recent data available), including more than 120,000 full-time jobs. This resulted in $9 billion in employee payroll spending and $496 million in estimated state income tax paid by employees, an increase from $8.7 billion and $483 million in 2015, respectively.

Specific data highlights from the 2017 report include:

In addition, NJHA’s annual Nursing Home Profile at www.njha.com/2017nursinghomes provides a comprehensive view of the economic contributions and quality results of the state’s nursing homes.

Financial information for the profile is based on 2015 Medicare cost reports, while quality data is collected from the Centers for Medicare and Medicaid Services’ Nursing Home Compare website for year-end 2016.

Perhaps most importantly for healthcare consumers, the data shows that the quality of care provided in New Jersey homes far surpasses the national average. Nearly 60 percent of New Jersey’s 358 skilled nursing facilities received a four- or five-star rating for quality from CMS, compared with 46.3 percent nationally.

Other key findings from the nursing home profile include:

“The economic footprint of our healthcare community ripples throughout state and local economies and provides a strong foundation for continuing to provide excellent care to the people of our state,” said Sean Hopkins, NJHA’s senior vice president of federal relations and health economics.