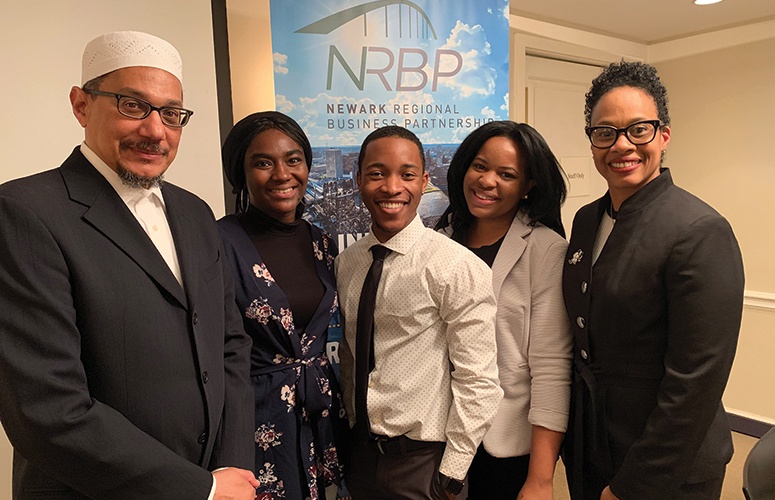 Business organization advocates for opportunities for all Newark residents.

“The transportation assets here are unparalleled, with Newark Liberty International Airport, Port Newark, Amtrak and NJ Transit rail lines (and bus service), the PATH system and major highways providing access to people and goods from all over the world … this is not something you find in a lot of places,” Hallock says.

It is because of Newark’s historic location as a transportation and shipping hub that it also evolved, since its founding in 1666, as a thriving location for businesses (today including major corporations such as Prudential Financial, Panasonic, Horizon Blue Cross/Blue Shield, Public Service Enterprise Group, Audible and Broadridge Financial Solutions), and people (not only from nearby regions of the US, but from various foreign countries).

It is because of this diverse make up that NRBP is helping its more than 400 members better understand how diversity, inclusion and equity play into a better and stronger Newark for its residents and businesses.

According to Barbara E. Kauffman, NRBP executive vice president and COO, “More than two years ago, we started to look into how our organization could be more diverse and offer programming for nonprofits and small- and mid-sized businesses that might not have chief diversity officers to help their teams and staff understand the benefits of diversity.

“There is a very strong business case why diversity, inclusion and equity make a difference in every metric of a company. The diversity of thought contributes to a better bottom line; businesses do better, and employees are happier and more loyal,” Kauffman says.

The survey gave birth to NRBP’s Diversity, Equity and Inclusion initiative, and among the first programs under this umbrella are the Intercultural Lunches, all, to date, held at the New Jersey Historical Society in Newark and the inaugural of which was “Exploring Islam.” Presented in April, just before the month of Ramadan, Kauffman comments, “We wanted members to have a better understanding of what Islam is about and what sorts of things a Muslim colleague might observe during Ramadan.”

Because of Newark’s large Portuguese heritage, the next Intercultural Lunch was titled “Experiencing Portugal,” held this past June just prior to the Portugal Day Festival.

Next month, NRBP is planning to host another Intercultural Lunch focusing on the LGBTQ+ community.

Another activity under the Diversity, Equity and Inclusion initiative was a session on “Understanding and Overcoming Unconscious Bias” held in May at Seton Hall University Law School. The workshop explained that people have unconscious bias and how, in the workplace, it can affect hiring, assignments, promotions, evaluations, customer service and more.

Discussing the need for this topic, Hallock says that Newark residents fill only 18 percent of the jobs in the city. “We have to make sure that employers are actively courting these people, and this is where the training in understanding and overcoming unconscious bias comes in,” he says.

“There have been surveys conducted where if you have two identical resumes, but one has a Newark address versus another municipality, the people from outside of Newark would get hired more quickly,” Hallock says.

“In our training session, we learned that the same thing happens with people’s first names. With a stereotypical sounding “white person’s” name verses a stereotypical ‘African-American person’s’ name, the person with the white-sounding name would get hired before the African-American person. So our sessions are efforts to help break down these barriers to employment,” Hallock says.

This past July, NRBP hosted a half-day Diversity, Equity and Inclusion training event, where attendees learned about the differences between diversity, equity and inclusion and how to identify the intersections between the concepts, unconscious bias, emotional intelligence, multigenerational diversity challenges and more. According to Kauffman, “We discussed what strategies to use to have people get along, connect with each other and improve the bottom line of an organization.”

Attendees of the training were surveyed following the event and, at press time, NRBP is using their feedback to guide the next steps in developing future programming. Ideas already include forming diverse affinity groups for groups of small businesses, and holding a session on emotional intelligence.

The goal of these efforts is to create a safe space where people from different backgrounds can get to know and understand one another without the vitriol and nastiness that is so common these days, Hallock explains.

He credits the collaboration among the city’s businesses, economic/communitydevelopment organizations, institutions of higher education and the administration of Mayor Ras Baraka for creating opportunities for all Newark residents to succeed economically.

NRBP’s Communications Director, Maya Curry, has coordinated all of the organization’s D&I work and has a unique perspective as Newarker. “While Newark has always been a fairly diverse city, it has not always been as inclusive as it is today. There are many innovative educational, financial, and career-focused programs and initiatives that are connecting Newark businesses with Newark residents. It’s great to see that kind of intentional collaboration and the resulting benefits for all,” she notes.

On the following pages, you will read about these initiatives as we delve into how Newark’s corporations, institutions of higher education and fine and performing arts institutions are bringing people together.

Yes, Newark is a diverse city and NRBP is a proud leader in the collective effort to promote additional opportunities for residents as well as underserved and underrepresented groups of people.

State of Diversity: In Pursuit of Good Health for All New Jerseyans