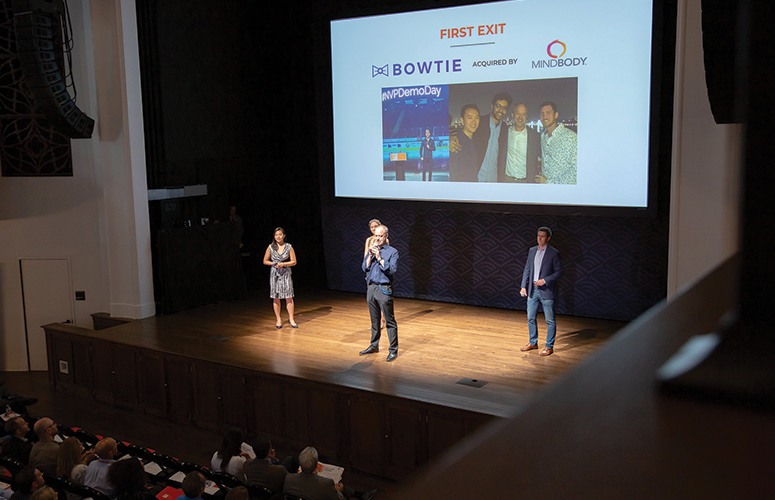 Thomas Wisniewski, of NVP, talking and sharing the stage with NVP’s leadership team at a recent demo day event.
High-Tech

Buzz Builds for Newark as a Technology Hub

A convergence of forces has earned Newark a growing reputation as one of the hottest tech hubs in the country. The city boasts: super-fast Wi-Fi and one of the most advanced networks of dark fiber anywhere; a diverse pool of top tech talent filled by colleges and universities that make Newark the state’s leading center of higher education; a location that offers unparalleled global transportation connectivity, plus ready access to venture capital with New York City just minutes away.

From industry giants like Audible to hopeful start-ups, Newark’s high-tech community has capitalized on the city’s assets and resources to fuel a technology-driven future with great promise for businesses and residents. A welcoming and collaborative atmosphere, from City Hall to college classrooms to incubators, investors and coworking spaces, has supported this exciting turn of events for an ever-evolving Newark on the rise.

In July, Newark was ranked as a top East Coast market on CBRE’s annual “Scoring Tech Talent Report” for 2019. Total tech occupations grew 9.7 percent from 2013 to 2018 in Newark, according to the report, which ranks 50 US and Canadian markets according to their ability to attract and grow tech talent. The CBRE report ranks Newark as a top East Coast market with more than 53,000 tech jobs, most in software development, computer programming and database system management.

Tech labor concentration – or the percentage of total employment – is an influential factor in how “tech-centric” the market is and its growth potential. The top five markets for tech talent in 2019 were the San Francisco Bay Area, Seattle, Toronto, Washington, D.C., and New York, all large markets with a tech labor pool of more than 150,000.

Dudley Ryan, senior vice president, CBRE, says Newark has the ideal combination of a highly educated and talented workforce and is conveniently located in proximity to Manhattan. “As one of the top East Coast tech hubs and the largest port on the East Coast, Newark’s technology sector is well positioned for growth in both technology and logistics,” Ryan notes.

In addition, SmartAsset, a web-based financial technology company, rated Newark as the nation’s second most undervalued city, trailing only Pittsburgh based on their data and methodology. Factors ranged from real estate prices per square foot and percentage of residents with college degrees to weather and walkability.

The creation of Newark Venture Partners (NVP) in 2015 marked a milestone in Newark’s progress toward becoming a tech hub. The $45-million venture capital fund and accelerator, founded by Audible founder and CEO Don Katz, has invested in 65 early-stage companies in fintech, healthcare IT, future of work, enterprise SaaS and AI-powered applications and drawn interest from thousands of promising startups around the world. Thirty-one companies have committed to a presence in Newark.

Backed by Horizon Blue Cross Blue Shield of NJ, Panasonic, TD Bank, RWJBarnabas Health, Prudential, Dun & Bradstreet and Fidelco Realty Group in addition to Audible, NVP has not only provided funding but also professional support and guidance. “We are engaged in collaborative efforts,” Jennifer Solomon, NVP’s communications manager, says. “We get invested in people and their products and services.”

Since its founding four years ago, more than 2,000 companies have applied for acceptance into NVP’s accelerator program. “Our last NVP Labs cohort had founders from eight different countries, and American innovation hubs from Brooklyn and Atlanta, to Chicago and Sacramento,” Thomas Wisniewski, NVP’s managing partner, points out. “Our selection rate for this program is less than 1%, so truly these are top tier early stage start-ups with great products and incredible founders that could have had their pick of accelerator programs. They chose to come to NVP in Newark not because we were the only choice, but because we are the best choice, and offer the best opportunity for growth.”

Newark’s diversity is one of its strongest assets. Rutgers-Newark is the most diverse college campus in the country, according to U.S. News & World Report, and a report released last year by the New American Economy ranked Newark first in integrating immigrants. Immigrants play an outsized role in entrepreneurship; they are more likely to start venture capital-backed companies and create inventions that earn patents.

William Lutz, NJIT director of commercialization highlights a recent report from Forbes that ranked the school number one nationally for colleges with the highest upward student mobility rates. Roughly 50% of students are female; 40% are non-white. He considers Newark’s high-tech community an engine for growth, with NJIT part of the talent pipeline for start-ups focused on research and innovation.

Lutz, who oversees VentureLink, which provides an incubator program plus both co-working and private office space on the campus of NJIT, has been in the Brick City for less than a year. He sees parallels between Pittsburgh and Newark, so called second-tier cities. He started two companies in Pittsburgh and saw what can happen when a city “pulls the right levers and pushes the right buttons.” Lutz witnessed the influx of top tech companies like Google, Uber and Facebook, and how they helped transform Pittsburgh from a rust belt remnant to a technology innovator, and believes Newark is poised for a renaissance of its own.

While many VentureLink participants are NJIT undergraduate and graduate students, enrollment in the school is not required. Here is a sampling of a few entrepreneurs located at the incubator:

Yulissa Rojas is the force behind Wipe HER Away, a fabric-cleaning-pen (like a Tide-pen) that cleans up blood on clothing. It was designed to support working women who are menstruating while at work.

Chrystoff Camacho’s Paratrees uses drone technology and modern software to improve forestry management. What used to be done on pen and paper is now done electronically. The drone surveying technology makes management easier, faster and more efficient. Camacho also has a patent on a seed planting delivery device from drones for forestry growth.

Amazon’s VOICE Summit at NJIT, bringing 5,000 professionals to Newark for four days, is a strong indication of where Newark is going when it comes to technology, adds Barbara E. Kauffman, Newark Regional Business Partnership (NRBP) executive vice president and COO. “Newark’s diverse population appeals to the young professionals who are capitalizing on new technology including the voice activation at the center of the VOICE Summit,” Kauffman continues. “The compelling story about Newark is the growing recognition that the city is a place where mature companies thrive, emerging enterprises grow, and new ventures begin.”

Newark Community Economic Development Corporation’s (NCEDC) Newark Fiber project is helping to expand the benefit of high-speed Internet access to commercial and residential buildings throughout the city. Introduced in 2018, once a building is connected to Newark Fiber’s network, its tenants have the option of signing up for what is billed as the fastest, cheapest service in the region.

The Newark Fiber network includes the Hahne & Company building on Halsey Street and 2 Gateway Center on Market Street, plus many other prominent properties located downtown and beyond the city center, serving businesses and residents across the income spectrum.

A recent Newark Fiber addition was the Murphy Varnish Lofts in the Ironbound section of Newark’s East Ward. Like many properties in the city, the project’s developer has pitched its Newark Fiber connection as a major amenity for commercial and residential tenants. For just $50.00 per month, they receive unlimited Internet, with no data caps and no annual contract. Equally attractive, the service is conveniently billed each month as part of their rent payments.

Ian Palmer, managing member of 3rd Space, Newark’s newest coworking space on Lafayette Street, says Newark Fiber has allowed his company to offer free, super-fast Wi-Fi to its members while enjoying a reasonable cost. “This suggests that Newark is serious about its reputation as a tech hub and is looking to expand upon it,” Palmer states. “We have met some incredibly impressive people who have this city in their hearts and are eager to see it blossom. 3rd Space endeavors to be a resource for start-ups and entrepreneurs right here in Newark; there is little need to go far to find the talent to get the job done.”

Chris Schultz, CEO & founder of Launch Pad, a downtown coworking space that opened in 2018, believes there is a huge amount of energy in Newark. “A lot is happening, and it is thriving from an entrepreneurship perspective,” Schultz adds. “One of our most recent members moved from Brooklyn to Newark because his job is about identifying musical talent, and this is where it is right now. We see a real focus on entrepreneurship in Newark, and a lot of folks looking to start something, or run a side business. Newark itself is investing in attracting business and supporting innovation. Having Audible down the street is a great inspiration that amazing companies can be here.”

Audible continued to show creativity and leadership for Newark’s high-tech community with the May opening of its new Innovation Cathedral, a cornerstone of Newark’s burgeoning innovation ecosystem that employs 400 technologists. Drawing talent, Newark residents and visitors to a reinvented historic church in a revitalized downtown district, it brings to bear Audible’s vision of supporting students, interns, and entrepreneurs and growing a tech ecosystem that will lift Newark’s economy.

Audible works closely with the City of Newark and the Newark Alliance to recruit new businesses to the area and to make it clear the company is looking for corporate neighbors who care as deeply about the revitalization of Newark as they do.

“Audible moved to Newark 12 years ago to see if a successful company could pursue the vision of directly catalyzing positive change in a great American city,” Don Katz, Audible’s founder concludes. “It’s one of the best decisions we’ve made.”