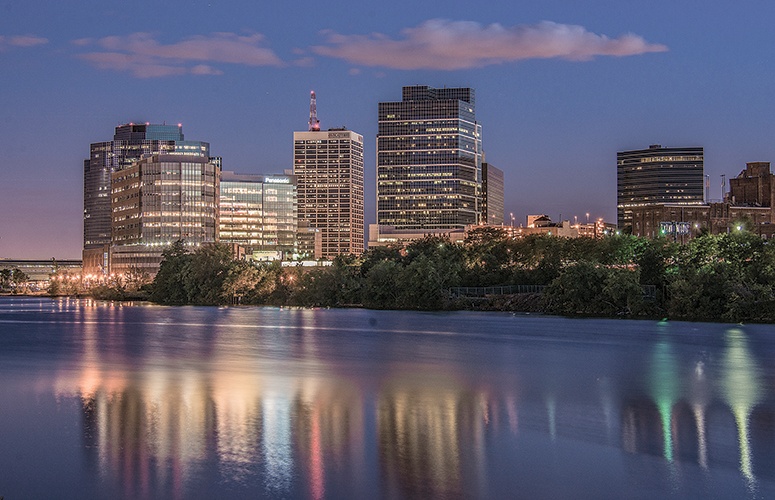 NRBP’s Approach to Helping Businesses and the Newark Region Thrive

Just as the City of Newark is the epicenter of New Jersey’s transportation infrastructure, where an international airport, seaport, rail station and major highways all interconnect to feed commerce in the tri-state area, the Newark Regional Business Partnership (NRBP) is the connector of human capital, bringing small business and major corporations, institutions of higher education, professional service firms, manufacturers, non-profit organizations and others together to grow the city’s and region’s economy.

“We connect our 435 members to opportunities, information and other people who could make them more successful. That can range from behind-the-scenes member-to-member introductions so businesses can explore working relationships, to advocating for economic development efforts, while opposing initiatives that would take away from Newark’s and New Jersey’s economic competitiveness,” says NRBP president and CEO Chip Hallock.

NRBP traces its roots back to 1869 as the Newark Board of Trade before incorporating as the Newark Chamber of Commerce in 1922. Following four other name changes in the decades ahead, NRBP was adopted in 2006.

With half of its membership coming from outside the City of Newark, Barbara E. Kauffman, NRBP executive vice president and COO, explains the organization has historically been a regional group. “This really hasn’t changed since our inception. Newark was and continues to be a center of commerce … a place where businesses see opportunity. It’s natural that organizations outside of the city would want to participate in what is happening here.”

NRBP’s first-rate events are the most visible sign of the organization’s vibrancy and success. Members get together several times each month for animated business networking sessions and informative programs such as the Eye Opener series sponsored by RWJBarnabas Health and the Real Estate, Economics and Development Series sponsored by TD Bank.

On the advocacy front, NRBP has been involved in a number of initiatives to improve the region’s physical and business infrastructures. Among its accomplishments, the organization: coordinated the initial feasibility studies for a downtown arena in the 1990s and today remains a stalwart supporter of the Prudential Center and the Newark Downtown Core Redevelopment Plan; continuously opposes efforts by several presidential administrations to reduce federal support for the Northeast Corridor rail line and continues support for the Gateway Program that includes new Hudson River Tunnels, the Portal Bridge, track and station enhancements. NRBP helped to bring together business, government and non-profit partners to initiate the Greater Newark Convention and Visitors Bureau (GNCVB) in 2008, which led to the founding of a Tourism Improvement District providing more than $1.5 million a year for GNCVB to attract conferences, meetings and overnight leisure travelers to the city. Additionally, it continuously supports economic growth policies for the Port of New York and New Jersey, Newark Liberty International Airport, and investment in electric, gas and telecom infrastructures.

These and other NRBP economic development efforts are supported by the Renaissance Newark Foundation (RNF), the organization’s charitable affiliate, which undertakes research, conducts educational forums, and supports activities that promote improved relationships between members of divergent groups in order to support economic growth and employment opportunities in the City of Newark.

An ongoing RNF-funded initiative is the Newark Young Entrepreneurs Academy, better known as Newark YEA! In the 25-week program, 20 Newark middle and high school students assemble at Rutgers in Newark to generate business ideas, conduct market research, write business plans, make a business pitch to a panel of investors and launch their very own companies. The investments (grants) range from $150 to $2,000 depending upon the quality of the business plan and investment needed. Newark YEA! was seeded by a first year grant from The Nicholson Foundation and has received consistent support from Horizon Blue Cross Blue Shield of NJ and Verizon. Sam Delgado, Verizon New Jersey vice president, external affairs, was chair of NRBP’s Board of Directors during the first Newark YEA! class. “Education is one of the core principles of the Verizon Foundation and I am excited by the creativity and enthusiasm of the city’s young entrepreneurs,” Delgado says. Verizon’s commitment to education is not only in the Newark region, but throughout Verizon’s state, national and international footprint.

“YEA! is a way for NRBP to give back to the Newark community by encouraging youth to learn how to establish homegrown businesses that can provide local jobs and create family wealth,” Hallock says.

RNF raises about $150,000 annually, mostly via a golf outing at the exclusive Roxiticus Golf Club in Mendham and an annual black tie dinner held at the Newark Museum.

NRBP’s Board of Directors is comprised of 42 people representing the diversity of people and kinds of businesses that make up the organization’s membership. NRBP recently held several Board roundtables, smaller group discussions that allowed leadership to have conversations about business challenges, which were facilitated by board chair, Darrell K. Terry, Sr., CEO of RWJBarnabas Health’s Newark Beth Israel Medical Center and Children’s Hospital of NJ and vice chair Arcelio Aponte, senior vice chancellor for administration, economic development and CFO, Rutgers University-Newark. Among the topics discussed were supporting and welcoming small businesses in Newark, enhanced policy advocacy and promoting inclusion.

With such a multi-faceted city in a continuous state of flux, how does NRBP keep focused on what is going on?

“Our members tell us directly and through their business activity what’s important. Clearly, technology and talent is driving business and that’s reflected most recently in Newark by actions such as Audible’s amazing expansion, Broadridge Financial Solutions relocation to 2 Gateway, and the venture capital activity at Newark Venture Partners,” Hallock explains.

It is Newark’s robust fiber optics network, especially its underutilized “dark fiber,” that is enticing companies to consider moving into the city. Among the major initiatives in this area is the Newark Fiber, a program of the Newark Community Economic Development Corporation in conjunction with Gigxero that offers 1 gig and 10 gigs of Internet speeds in buildings, parks, streets and eventually in homes. Additionally, a company called Intersection is looking to place LinkNWK kiosks – that will offer free charging stations and public Wi-Fi – around the city.

A feather in the city’s tech cap was the Voice Summit held in July at the New Jersey Institute of Technology (NJIT). Arranged by Modev and with Amazon Alexa as a major sponsor, an estimated 2,700 attended the event, billed as the nation’s largest multi-day conference to explore voice-first era technologies and how voice-activated artificial intelligence is revolutionizing the way people interact with devices, services and consumer products.

The success of VOICE not only illustrated Newark’s tech relevance, but demonstrated the city’s capability to host large scale meetings and conferences – a great accomplishment for the leadership of NCEDC, NJIT and GNCVB as well as the city’s hotels, restaurants and arts venues.

Kauffman says that NRBP’s membership has “a strong building trades representation – including construction, real estate brokerage, developers, architecture and engineering firms – and they are all interested in what is happening in the tech sector and it being a factor as to why companies are moving here. Newark sits on this fiber highway and companies are recognizing they can’t get this level of connectivity in just about any other location.”

Asked about some of the major real estate projects underway, Kauffman points to Ironside Newark, an Edison Properties facility where Mars Wrigley Confectionary will occupy 110,000 square feet within the 450,000-square-foot facility. The building was a former freight warehouse that is being restored to offer office and retail space. Mars, which purchased Chicago-based Wrigley’s in 2008, has operated a major facility in Hackettstown for decades, but Kauffman explains the company was originally founded in Newark.

Kauffman then points to Newark Bears and Eagles Stadium, which will be taken down and, in its place, a mixed-use office and residential complex will be built. Known as Riverfront Square, the $1.7-billion project is being undertaken by Lotus Equity Group. Consisting of 2.3 million square feet, it will provide up to 2,000 residential units and 500,000 square feet of office space (mostly in what is being considered as the largest planned mass timber office building in the country), and large- and small-scale retail, cultural and public space, all on an 8-acre site just steps from NJ Transit’s Broad Street Station.

Near Penn Station, Onyx Equities is modernizing One Gateway Center, the landmark 522,696-square-foot, 26-story office building. Kauffman says that Onyx is also likely to capitalize on the dark fiber network, similar to what Lotus Equity Group did at nearby 2 Gateway Center.

At the newly renovated Hahne Building, Launch Pad, a company that specializes in developing co-working spaces with the intent of spurring collaboration and innovative company birth, opened its facility in March and is already 80 percent occupied. “Why did they choose Newark?” Kauffman asks. “Launch Pad said it looks for cities with potential, with a high demand for co-working space. More importantly, it wanted to be somewhere that has a sense of place … and Newark now has that sense of place.”

Does Amazon think Newark has this “sense of place” as it nears its decision on locating its HQ2? The good news is that the city made the top 20 out of 238 cities and regions, which was announced this past January. If Newark is chosen, it means the creation of between 30,000 to 50,000 jobs for the city, with the average salary of $100,000 or more. According to a Forbes magazine article, no matter where Amazon goes, the company is expected to invest more than $5 billion over the next 20 years.

“In my mind, the Amazon selection has been a game changer,” Kauffman says.

Kauffman credits the City of Newark, the business and higher education communities and more for creating a team effort in putting together the Amazon proposal. “The city – public and private sectors – came together in a way we hadn’t seen before,” she says.

Hallock specifically commends Mayor Ras Baraka’s leadership in bringing the various public- and private-sector communities together in ways beyond the Amazon bid. He recognizes former Newark Mayors Sharpe James and Cory Booker for their respective roles in Newark’s renaissance, and respects Mayor Baraka’s perseverance in getting projects that may have been in play during previous administrations, “over the goal line to score touchdowns.”

“You need to continue the momentum, make smart decisions and exhibit good leadership that reinforces the faith that more people are beginning to show in the city. … And Mayor Baraka has done that,” Hallock says.

People Have the Power

Hallock and Kauffman are proud of and excited by how far Newark has come in their decades of service at NRBP. However, for the city to continue its forward movement, Hallock emphasizes that Newark will be a success story only when the people who live here also benefit from the city’s revitalization.

Similar to the city’s Amazon bid, many forces in the city are working on a collaborative and complementary basis to support opportunities for residents. Examples include Newark Alliance’s stewardship of Newark 2020 whereby 2,020 unemployed Newark residents will be connected to jobs by the year 2020; Newark City of Learning Collaborative to ensure that all Newark residents have the opportunity, information and access to attend, afford and complete college and ultimately obtain good jobs; and RWJBarnabas Health’s Newark Beth Israel Medical Center’s Hire Newark Employment Ready Boot Camp, which has graduated four classes of chronically unemployed Newarkers into jobs.

“We know about the challenges residents have faced over the years in terms of poverty, job opportunities and educational attainment. Nobody is declaring victory yet, but you can see that in Newark’s comeback, stakeholders are connecting the dots to ensure residents do well,” Hallock says.

NRBP will be a team player in helping residents and businesses thrive, just as the organization and its predecessors have done these past 149 years.

Newark: Opportunity For All