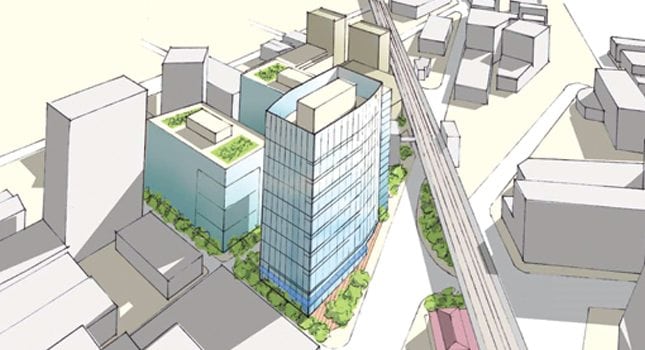 New Brunswick has embarked on an exciting new project that will write the next chapter of its success story. The project, which centers around the redevelopment of a 6-acre site located in the heart of the city’s downtown, adjacent to the rail station, involves the development of a major mixed-use initiative that will transform New Brunswick’s downtown core. With 1.7 million square feet of commercial, residential and retail uses, this site will not only define a new neighborhood but it will solidify New Brunswick’s prominence as a regional hub of commerce, culture and urban living.

“This project is truly a unique, once in a generation opportunity for a city to further redefine itself. It is through the creation of a vibrant urban neighborhood that we will attract employers, innovators, entrepreneurs, and those seeking an urban residential lifestyle. Together, these new employers and residents will continue to turn the economic engine for the city and the region as a whole,” said Christopher J. Paladino, president of the New Brunswick Development Corporation (“DEVCO”).

The development represents the third phase of New Brunswick’s Transit Village Initiative, which already lays claim to the development of new residential, retail, office and parking in New Brunswick’s central core. This new phase of development will further transform the downtown with the addition of a multi-building complex that will be anchored by one million square feet of flexible, open-plan office and research space. The office development will be build-to-suit to accommodate major corporate office tenant(s) and will provide direct access to both parking as well as the rail line – which is served by NJ Transit and Amtrak’s Northeast Corridor line. 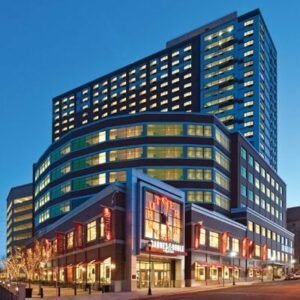 The project will also incorporate a significant residential presence, including 500 units of rental and for sale housing, and over 100,000 square feet of exciting ground floor retail. Public spaces will wind through the area, establishing the project as not just a mix of uses – but as a true neighborhood with a sense of place.

“New Brunswick and DEVCO have worked together for many years to create a city with mixed-use neighborhoods that provide housing, jobs and retail in high quality environments with an emphasis on walkability and transportation,” said Glenn Patterson, Director of Planning, Community & Economic Development for the City of New Brunswick. “This approach has created a dynamic city with an exciting urban landscape. This new development near the train station will not only bolster the quality of life for residents and employees, but will create a new street grid that will enhance New Brunswick’s urban design and walkability.”

With the city as a driving force in New Jersey’s medical and healthcare industries, Johnson & Johnson’s high profile world headquarters, and Rutgers University as one of the nation’s leading research universities, New Brunswick is considered a highly desired location by business. With a host of restaurants and night spots, world-class entertainment at any one of three local theaters and walkable, livable neighborhoods, New Brunswick offers the 24-hour experience that more and more employees and residents desire. Further, the proximity to the University and its population of graduate and undergraduate students, faculty and staff provides New Brunswick businesses with access to tomorrow’s workforce – today.

Guided by success stories like MIT and Kendall Square in Cambridge, new development in the downtown will be built upon the ability to create important synergies between the new commercial development and the strength and resources of nearby Rutgers as a major research-oriented university.

DEVCO is already in early discussions with leading biotechnology, healthcare, and telecommunications firms with the potential of relocating their corporate operations to this exciting new neighborhood. Armed with a proven track record of implementing successful redevelopment projects, DEVCO is looking to establish unique partnerships between private business, the University, local teaching hospitals and the State of New Jersey in an effort to bring about what promises to be one of the most interesting and important development opportunities in New Jersey.

DEVCO has also begun to develop a plan for new housing options for the project area, identifying the styles and mixes of housing. From studios to two bedrooms, from top floor to townhouse style, the project will include a mix of housing types and amenities that will establish it as a true neighborhood. New retail opportunities have also factored into the planning efforts, with DEVCO already in discussions with potential retail and restaurant establishments for the area.

“This project is really the capstone of an extraordinary story that has taken place in New Brunswick,” said James W. Hughes, Ph.D., dean, Edward J. Bloustein School of Planning and Public Policy at Rutgers University. “Over the past two decades DEVCO and New Brunswick have made enormous strides in cementing its place as a key city for commerce, higher education and culture. New Brunswick is well-positioned to meet the needs of the region’s businesses who increasingly prefer an urban environment with mass transit, access to human capital and a sense of community rather than car-reliant suburban offices surrounded by a sea of parking. Simply put, New Brunswick’s best days are still ahead of it.”

Unlike other urban areas, the city has become known for its success in not only planning for great projects, but in also realizing their successful completion. Among the most auspicious projects of the Transit Village Initiative undertaken by DEVCO is the 24-story Gateway Transit Village. The development is made up of 150 rental units and 42 condominiums, and includes both market as well as affordable rental rates. There is also a significant office space presence, 600 new parking spots and 57,000 square feet of retail that includes a major Barnes and Noble Rutgers University Bookstore. A direct walkway connection to the rail platform has made the building one of the central hubs in downtown New Brunswick.

Another example of the transit-oriented, smart growth projects developed by DEVCO is Wellness Plaza. This project has brought a major fitness center in partnership with the Robert Wood Johnson University Hospital, providing a state-of-the-art, 60,000-square-foot  fitness and aquatic center, serving New Brunswick’s residents and workforce. Located immediately across from the train station, the center is easily accessible by those working and living in town, and by those commuting into or out of the city by train. The neighboring Heldrich Hotel and Rockoff Hall University Apartments have also helped to solidify New Brunswick’s position as an exciting 24/7 urban destination.

Increasing access to mass transit continues to be an important component of New Brunswick’s future growth. Recent station improvements by NJ Transit, including platform upgrades and a connecting bridge, have made mass transit in New Brunswick more efficient and more accessible. The development of additional bridge connections to the eastbound platform will further establish the integration of mass transit with local development. New Brunswick’s position along the Northeast Corridor makes it a prime location for those companies and residents that realize the benefits from working and living in proximity to mass transit.

“New Brunswick stands with the New Jersey waterfront as the best urban location in the state for companies seeking a vibrant, 24-7 community with extraordinary mass transit connectivity,” said Daniel Loughlin, international director and broker lead for JLL in New Jersey. “The city offers a full complement of economic incentives, providing companies with an unparalleled build-to-suit opportunity in a premier live, work, play environment that boasts direct access to to New York City, Boston and Washington DC.”

The Big Ten is Coming to New Brunswick

New Brunswick’s reach continues to grow. In the coming months, Rutgers will join the Big Ten Athletic Conference, which includes some of the most well-traveled sports fans in the nation. As tourists visit the city for the first time for various sporting events, comparisons are sure to be drawn between New Brunswick and other respected Big Ten cities. To be sure, DEVCO is preparing for the influx of visitors.

“We have begun to market the city to fans of the other 13 schools in the conference that want to not only see their teams play, but to also easily access New York City,” said Christopher Paladino. “New Brunswick’s national profile is rapidly rising and the immediate future could not be a more exciting time to tap into the city’s growing energy.