The new Academic Building will be completed in August 2016 and will serve 20,000 students daily.

A Historic Campus for the Next Generation

Rutgers University’s future is here. It has been a historic year for Rutgers, one of America’s oldest and most storied universities. In the most significant merger in the history of American higher education, Rutgers University has brought together components of what is now one of the largest schools of medical and dental education in America, and some of the nation’s premier centers for biomedical research, to establish Rutgers Biomedical and Health Sciences (RBHS). RBHS now stands as one of America’s largest and most comprehensive universities for the advancement of research-driven healthcare. In similar fashion, Rutgers has accepted an invitation to join the Big Ten Conference, aligning itself not only with America’s most prestigious athletic conference, but also with a collaboration of the nation’s preeminent research institutions. With these momentous steps, Rutgers is ready to write the next chapter in its already centuries old history of tradition and excellence; a tradition that began and continues in New Brunswick.

New Brunswick has been at the forefront of New Jersey’s urban revitalization movement over the past several decades. Anchored by its long-standing partnership with Rutgers, New Brunswick has witnessed significant growth and rebirth over the past many years. The New Brunswick Development Corporation (“DEVCO”), a 501(c)(3) corporation with over 35 years of experience in redevelopment in New Brunswick and throughout New Jersey, has served as the vehicle by which much of this revitalization has occurred. DEVCO has successfully partnered with Rutgers on the development of a number of new University facilities in New Brunswick and Newark, establishing a partnership that has generated significant benefits for both the University as well as the community at large. 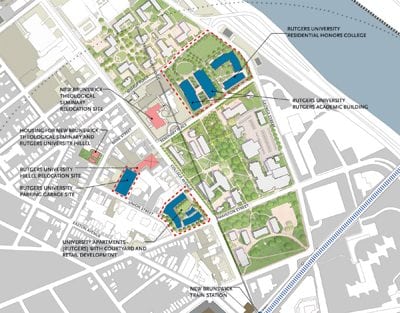 Rutgers University and DEVCO have continued their successful collaboration for the completion of the College Avenue Redevelopment Initiative in an effort to showcase New Brunswick as one of America’s most exciting college towns. With Rutgers’ academic programs now unified under a single University, the College Avenue Redevelopment Initiative has afforded an opportunity to transform Rutgers’ historic flagship campus into an even greater space for future generations. DEVCO and Rutgers are working together to build state-of-the-art facilities that will enhance student and city life, create more accessibility and connectivity, and bring new attention to its historic campus on College Avenue.

“We pride ourselves on being one of the oldest universities in the nation, but that doesn’t mean we have to have the oldest buildings,” said Rutgers President Robert L. Barchi. “Never during Rutgers’ 250 year history has there been so much potential for the University in such a short period of time. The future is bright for Rutgers, and is within our grasp.”

The $330 million College Avenue Redevelopment Initiative represents one of the most transformative public-private partnerships in New Jersey history. DEVCO has built a truly unique collaborative partnership between Rutgers, the City of New Brunswick, the New Jersey Economic Development Authority (NJEDA), New Brunswick Theological Seminary, and Rutgers Hillel. The new Honors College will be completed by August of 2015, and new student apartment and academic buildings by August of 2016, in time for the 250th anniversary of the founding of Rutgers. The College Avenue Redevelopment Initiative will bolster comparisons between New Brunswick and innovative college towns such as Cambridge, Ann Arbor and Madison.

“Great projects happen when bright people with vision work together toward common goals,” said New Brunswick Mayor James M. Cahill. “The College Avenue Redevelopment Initiative brings the City’s remarkable revitalization directly into the heart of Rutgers’ historic campus. DEVCO and its partners have created a truly stunning addition for Rutgers and the City of New Brunswick that will even further enhance the connection between our community and the University.”

Rutgers Honors College: The Honors College will represent best practices in higher education for exceptional students, offering unique academic opportunities and challenges beyond traditional curriculum and classroom experience. It will provide approximately 500 honors students with a unique, collegiate residential experience and is specifically designed to create an environment for intensive small group study, extensive personalized advising, faculty mentoring and a wide range of specialized cultural and social activities across all disciplines.

“The Honors College and the Rutgers Academic Building will transform the core of the campus, connecting the historic College Avenue Campus with residential buildings located to the north, and creating a strong sense of place,” said David P. Manfredi, a founding principal of Elkus Manfredi Architects. “Rutgers is among the oldest and most venerable universities in the country. This new development will provide academic, social, residential, and public spaces that respect Rutgers University’s rich history, and encourage the college’s forward-thinking commitment to collaborative education and cutting-edge research. This initiative is the physical embodiment of an exciting new phase for the University.”

The project will also advance Rutgers University’s competitive position within the prestigious Association of American Universities, the Big Ten Conference and the Committee on Institutional Cooperation. The new academic building and the residential Honors College will attract the “best and the brightest” to the University, and strengthen New Jersey’s future workforce, a critical objective for the state.

“The residential Honors College will draw the finest young minds from the region to a vibrant, scholarly community housed in a state-of-the-art living and learning facility,” said Professor Matt Matsuda, dean of the School of Arts and Sciences Honors Program. “The Honors College is being built around collaborative programming spaces, special study areas, and seminar/project rooms, and will host students from schools and fields across the University in truly interdisciplinary learning and community engagement. The Honors Dean and faculty fellows will also be able to live on site, providing exceptional academic and collegial mentoring opportunities. This will set Rutgers apart, even from other elite public university honors programs.”

“Rutgers Living Room” and State-of-the-Art University Housing: Amazing opportunities exist to further weave together the Rutgers and New Brunswick communities. On College Avenue, one block from the city’s train station, DEVCO is creating an exciting on-campus living experience to meet the increasing occupancy demands for current and future students in the form of a 135-unit, 450-bed apartment-style housing complex. It will feature apartment-style housing, with three or four single bedrooms in each apartment. The building will also feature such student amenities as an on-site fitness center, student lounges and welcoming indoor/outdoor public spaces. The mixed-use ground floor, inspired by New Jersey’s famed boardwalks, will include 16,000 square feet of first-class retail and restaurants to encourage an active and energetic environment. The main draw will be the large public green space. Its courtyard – dubbed the Rutgers Living Room – will feature a state-of-the-art 600-square-foot outdoor video screen for movie nights, sporting events and other entertainment to build a cohesive and welcoming urban park. Visitors will also have access to universal WiFi.

“This will be New Brunswick’s own Bryant Park,” said Christopher J. Paladino, president of the New Brunswick Development Corporation. “It is our latest and most substantial effort to foster an urban live-work-play lifestyle while also stressing walkability, access to mass transit and a sense of community. Thanks to the cooperation of Rutgers University, the New Jersey Economic Development Authority, the City of New Brunswick, New Brunswick Theological Seminary and Rutgers Hillel, DEVCO was able to design and build this fantastic new neighborhood.”

The project will have a lasting impact on Rutgers University, New Brunswick and the entire state of New Jersey. The College Avenue Redevelopment Initiative will create thousands of jobs and business opportunities, continue the city’s revitalization and attract major companies and entrepreneurs to New Jersey, in turn, strengthening the state’s overall economy.

As Rutgers and New Brunswick embark on this exciting journey to usher in a new era for strengthened academic offerings and smart urban growth, New Jersey stands to benefit from the increased presence of a premier research institution and fast growing small city. DEVCO is charting its next phase of development in New Brunswick and employers, innovators, entrepreneurs, and students will take note.