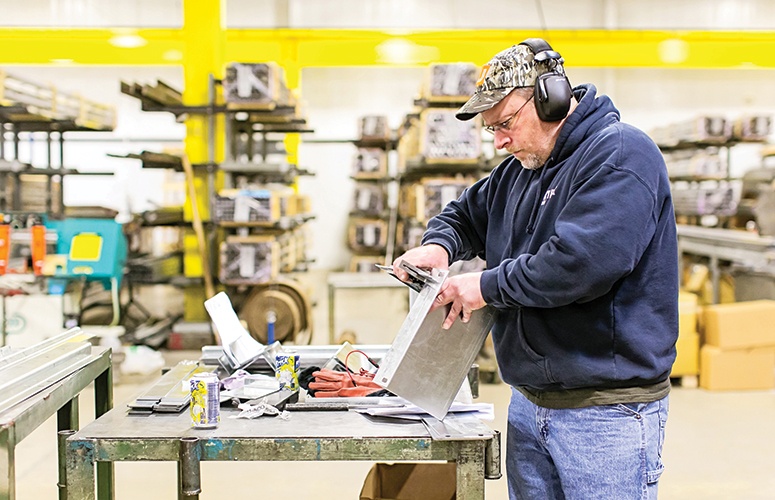 Technology is helping manufacturers remain competitive, but many worry that tariffs, regulations and taxes will offset tech benefits.

Manufacturers in New Jersey continue to rely on high-tech solutions and niche markets to maintain a competitive edge. All the state’s principal manufacturing industries – food preparation and packaging, chemicals and pharmaceuticals, machinery, fabricated metal, and computers and electronics – now rely significantly on advanced manufacturing, which combines digital technologies and mechanics to increase efficiency and precision. But in the birthplace of the Industrial Revolution, companies today are struggling with state regulations and high taxes as well as changes in national policy such as increased tariffs.

New Jersey manufacturers produce $44.52 billion in annual output, according to the NJ Manufacturing Extension Program (NJMEP) 2018 annual report. Based on the most recent numbers from 2015, manufacturing accounted for 7.2 percent of state GDP. Traditional manufacturing operations employed 240,500 people in the state with average annual compensation of $90,540. NJMEP notes every dollar spent on manufacturing generates another $1.81 for the state’s economy, the highest multiplier effect of any economic sector. Meanwhile, advanced manufacturing companies contributed $30.9 billion to real GDP and paid more than $13.4 billion in wages or roughly 6.5 percent of total New Jersey wages.

The Current State of Manufacturing

New Jersey is home to more than 11,000 companies engaged in manufacturing. Most of them are small – the average has 34 employees. The manufacturers interviewed for this story say the state is making headway in training current and future workers to close the skill gap between available jobs and labor.

While tariffs are on everybody’s mind right now, John W. Kennedy, CEO of NJMEP, notes trade deficits have impacted the US economy for decades and are not likely to be corrected with quick fixes such as tariffs.

“We’re talking about a trade war that we already lost many years ago. Let’s be realistic. We have an $800-billion trade gap and it wasn’t created by manufacturers and it wasn’t created by President Trump,” Kennedy says. “Many things come into play, the training gap with other countries, for example. After several decades of ignoring the industry, this is not a fix that will be done in the next six months.”

Kennedy, who owned – and then sold – two businesses, says the industry is healthy in New Jersey, but that the state has never been a healthy place to own a business. “New Jersey appears at 49th or 50th on lists of business-friendly states,” he says.

In addition to advocating for the industry, NJMEP has provided training to about 170,000 workers over the past 17 years, mainly on the manufacturing floors where they work. Kennedy notes that companies have used technology such as robotics and automation for years, although many companies are limited in how much they can invest in new technology by their small size. Even with advanced technologies, companies still have difficulty finding skilled high-tech workers. Manufacturers in the state are unable to fill approximately 25,000 available jobs because they cannot find workers with the right skills.

Paul Harencak, vice president of business development and technical services of LPS Industries, says the Moonachie-based flexible packaging manufacturer continually seeks technology that will keep it competitive. The second-generation family-owned company serves medical, pharmaceutical, food, cosmetic, government and military customers with 200 employees. LPS designs and manufactures roll stock. “If it makes economic sense, we look at adding new technology wherever possible. We have purchased multiple pieces of new equipment in recent years. We constantly look at technology and try to stay current to keep a competitive edge,” Harencak says, adding that LPS sees part of its competitiveness coming from its work with sustainable materials that increase recyclability and are compostable.

Clifford F. Lindholm, III, president and CEO of Falstrom Company in Passaic and co-chair of the NJBIA’s Manufacturing Network, says technologies such as automation that increase efficiency are critically important in a state like New Jersey “where we must make up for a higher cost of doing business compared to other parts of the country. Not only is the work environment safe, but so is the equipment. Our challenge as leaders in manufacturing is to be innovative and capitalize on advances in technology to transform and continue to be competitive in a global economy.”

Falstrom, a contract manufacturer with 117 employees, fabricates enclosures and electronic assemblies for the US Navy and Coast Guard as well as precision machined parts used by commercial jet engine manufacturers and companies supporting heating, oil and gas industries. “Falstrom Company is currently working with one of our key customers to design the next generation of a communications system for the Navy. It’s really exciting stuff and a new facet of our business,” Lindholm says.

Will Closing the Skills Gap be Enough?

Tariffs, high state taxes and other business issues threaten to offset progress being made to educate a high-tech manufacturing workforce.

“Right now, what we’re doing is smartening up the manufacturing floor, digitizing processes and connecting processes,” Neuwirth says. “For the past two-and-one-half years, we’ve been implementing a lot of technology to make our processes more efficient and sustainable. We will be part of the Internet of Things (IoT) five years from now.”

Apprenticeship programs and enhanced training will help, but will not produce the high-tech workforce that is needed overnight, according to Michael Marchetti, program manager for NJMEP’s Advanced Manufacturing Talent Network. “Roughly 30,000 to 35,000 students leave New Jersey for higher education every year and 75 percent never come back,” Marchetti says. “We have to explain to people how great the state is; the amenities of the farmland of southern New Jersey, the shore and northern New Jersey overlooking the greatest city in the world, New York.”

Even with its many recreational and aesthetic amenities, however, New Jersey has a less attractive side for many who are trying to run manufacturing businesses.

“When a manufacturer is successful, it is an exceptionally difficult thing to increase the size of your facility,” Marchetti says.

Lindholm cites recent legislative activity around paid sick leave and the potential for additional increases in the minimum wage as examples of the Legislature’s narrow range of concerns that don’t address the long-term problem. “New Jersey is an expensive state to live in and run a business. Almost none of the emphasis from our elected and appointed officials is directed at the root cause of this problem: The cost of state and local government and the inefficient delivery of services.”

Several New Jersey manufacturers testified in August, before the bipartisan New Jersey Legislative Manufacturing Caucus, that they were already being significantly hurt by tariffs as high as 25 percent on steel and aluminum. They are looking to the State Legislature for support in the form of loosening some regulations as well as tax relief and careful consideration of the impact raising the minimum wage would have on their competitiveness.

“Nobody wins with tariffs. If tariffs continue, they will hurt the growth of everyone’s business this year. … [There is] no way you can increase the prices of something 25 percent,” Neuwirth says. “Heathcare is another national issue that is still a mess. Every year costs go up and benefits go down. Our legislators don’t seem to want to tackle the things needed to make changes to the Affordable Care Act.”

“The future of manufacturing in the state is sketchy. The future of manufacturing in the country is positive,” Neuwirth says. He cites legislative inaction in promoting technology and job creation. “There is still outmigration of businesses and talent. I think we’re going to see more companies move out of New Jersey until the legislature passes legislation that helps businesses.”

NJMEP’s COO Robert Stramara believes manufacturing will become more customized, due in part to the small size of most manufacturing companies here. “With an average size of 34 workers, these are not high-volume manufacturers. These are companies that have found a niche. They make spec products in small quantities and they’re really good at it.”

Harencak expects to focus on two areas to remain competitive – technology and increased sustainability efforts such as LPS’ use of solar panels for 25 percent of the electricity used to run administrative and office operations.

New Jersey’s manufacturing history dates to Alexander Hamilton, and Lindholm believes it will always be part of the state’s economy. But, companies will have to be innovative to remain competitive. “I believe that the current trend of niche-focused manufacturing will continue,” Lindholm says. “The only way to survive is to be smaller and more nimble than your competitors.”