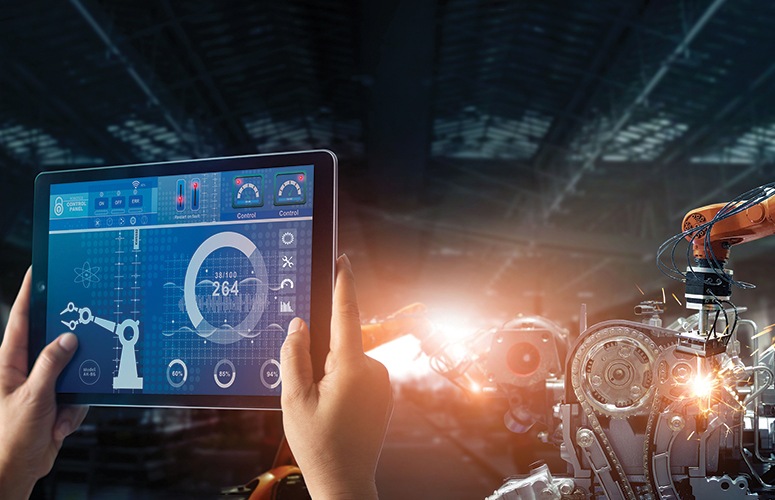 Next Generation Training for a New Manufacturing Age

As the world craves new materials and products to meet its needs, the manufacturing workforce must evolve to keep pace. Increasingly, advanced products that become part of everyday life require well-trained hands to oversee their creation. Academic and private resources across the state are responding to that need by introducing courses and programs that teach the latest in manufacturing technology and processes.

“In more and more jobs, people are going to need some type of postsecondary credential in order to be successful in the workforce,” says Jacob Farbman, executive director for the New Jersey Center for Student Success and director of communications for the New Jersey Council of County Colleges. Such credentials might not necessarily come from a four-year college, he says, and can speak to careers in manufacturing. For example, the County College of Morris, Farbman says, recently received a $4-million federal grant focused on training for jobs in advanced manufacturing. The County College of Morris will serve as the lead working with other community colleges in the state, German conglomerate Siemens, and other organizations to develop apprenticeship-based programs in the advanced manufacturing sector, he says.

The intent, Farbman says, is to build up the local workforce to help the more than 7,000 manufacturers in the state find the staff they need to be remain competitive. The grant is also part of a broader campaign to ensure that 65 percent of the state’s working population holds some type of secondary credential by 2025, he says.

Creating pathways to careers in manufacturing is a key goal for NJMEP, says CEO John W. Kennedy. About three years ago, his organization created the Pro-Action Education Network, which puts NJMEP in the middle for workforce development in a management role. He says his organization works with the Department of Labor, career centers, community colleges, and vocational-technical schools to help get students training to take on jobs in advanced manufacturing.

Manufacturing increasingly makes use of computer-aided designs and other advanced techniques that require new sets of specialized skills. Building up a workforce with the training to meet such demand in the state is a collaborative effort, Kennedy says. “If it’s only us or only a single county college doing this work, we’re not going to succeed.” He estimates there are more than 30,000 jobs available in this industry, with openings from assembly positions to machining, welding, management, technical sales and quality control for manufacturing.

Those jobs may include working with automation and computerization, technologies that have been implemented by the manufacturing world to increase efficiency and output. Kennedy says NJMEP and other organizations are part of what he calls Industry 4.0, alluding to a fourth industrial revolution that makes use of automation with robots and cobots (collaborative robots). “We’ve been able to produce more with a more advanced workforce because of certain technologies that exist,” he says.

Such technologies include computerized numerical control machining, which he says changed the dynamics of manufacturing. He also sees 3D printing as a technology that offers hefty amounts of promise. “A lot companies are using it at the baseline for prototyping, but that will change,” Kennedy says. He expects 3D printing to evolve into a more widely used tool across other aspects of manufacturing as it improves.

While there is some truth behind concerns that automation and computerization may reduce certain jobs, Kennedy says these advances also create high-end, higher-paying jobs. The industry will continue to thrive but he says workers will “need additional education and training.”

The rise of computerization in manufacturing might signal a turnaround rather than a decline for the industry. Kennedy sees NJMEP helping manufacturing grow again in this era by training the personnel needed to move into a new gear. “Many manufacturers contracted over the past 20 years because they couldn’t find people,” he says, “so they turned to different ways of producing their products.” Manufacturers now need trained personnel to oversee and maintain their increasingly complex machines, Kennedy says. “Industry 4.0 is the next evolution.”

There are some myths and misconceptions about the industry he wants to clear up. Though manufacturing has risen in other countries, Kennedy says it never disappeared domestically. “We have held onto the high-end production of a variety of things,” he says. “A lot of projections are laying out that the US will be back on top of manufacturing next year.” He believes that as companies discover they essentially might give away their intellectual property when they manufacture overseas, they might take action to avoid getting hurt by reverse-engineering.

In some cases, manufacturers cannot wait for new potential hires to arrive with the skills they require. That is where training company Manage Assist comes in, offering onsite training with the companies’ staff. “Everybody’s under pressure for faster, better, cheaper,” says Ted Pease, general manager. “In order to be competitive in a global market, velocity has become a big deal.”

Manage Assist has been training people to fill roles in manufacturing and distribution from early workers to management roles, Pease says. His company led off with lean manufacturing then grew into other disciplines, he says. Manage Assist provides customized content and delivery for its clients with training tailored for the manufacturer’s needs. “We make training practical, not just out of the book,” Pease says. “The bulk of our work is with state training grants.”

Though demand for a well-trained manufacturing workforce may be apparent, financial resources for such causes are not always plentiful. Pease says he would like to see more funding from the state to support Manage Assist’s programs. “The dollars available have been reduced over the years,” he says. “We see competition from community colleges, so some of the money is going there.” The need for more workers to support manufacturing is tangible, Pease says, as these companies try to compete domestically and overseas. “Our clients can’t find skilled workers,” he says. “It’s very difficult. There’s a real incentive for them to do internal training.”

Running alongside the program is an industrial engineering program that Lieber says focuses on processes and supply chain management within the manufacturing space. “These two programs complement each other greatly in terms of having an overarching view of manufacturing systems, supply chain, and communication,” he says.

NJIT has a number of resources at its disposal to help teach and demonstrate the possibilities of advanced manufacturing. The university currently has an additive metal machine, Lieber says, which was provided by a medical device company, for 3D printing metal objects. The university also developed a new Makerspace where manufacturing technologies are open to the student body and faculty to see firsthand. NJIT also makes use of a 5-axis CNC (computer numerical control) machine. A CNC is basically a computer-controlled machine that automatically shapes or drills a piece of raw material into a part. Lieber explains that machining is traditionally done in three axes, with X and Y axis motion on a table that moves side to side. The machining spindle then moves up and down, representing third axis.

The introduction of a 5-axis machine literally adds new dimensions to manufacturing. “Five axes allows rotation, all around the part, leading to manufacturing of very organic shapes that are typical in medical implants or aerospace components,” Lieber says. He believes such advances in machining will become more commonplace as the price point for the technology comes down.

For all the innovation that goes into advanced manufacturing, there is no escaping the needed continuing education and workforce development activities to train or retrain workers for this field. Showing there are worthwhile opportunities in manufacturing will be necessary to attract new entrants to the workforce in this sector.

From workforce training to market access, association helps spread the “Made in NJ” call.

Manufacturing continues to be a core component of New Jersey’s economy, and as such, a big part of what the New Jersey Business & Industry Association does.

New Jersey manufacturers are incredible – they compete and win on an international level despite operating in one of the highest cost states in the nation. And they deserve New Jersey’s support.

The association maintains a strong basic skills training program in conjunction with the state’s county colleges and the New Jersey Department of Labor and Workforce Development. The program provides training for communications, customer service, computers, English as a second language and more at no cost to employers.

NJBIA also helped develop a metal fabrication training program, where jobs are already lined up for the candidates before they begin their training. Upon completion, graduates receive a College Certificate of Competency and take the National Institute for Metalworking Skills (NIMS) Certification Exam for Measurement, Materials, and Safety Level I.

And the Mobile Manufacturing Training program brings job training to regional sites near manufacturers who are hiring. Manufacturers participate in developing curriculum as well as the screening and training of workers, which is conducted on the mobile training lab’s state-of-the-art equipment.

But while workforce development is key to New Jersey manufacturers’ success, it won’t mean much without business development. That’s why NJBIA entered into an exciting partnership with the National Association of Manufacturers.

The association is the official state liaison for NAM, which maintains a database of more than 300,000 leading manufacturers nationwide. Companies that are members of NJBIA can subscribe to that database and market to those manufacturers for only $500 per year, an 80% discount off of NAM’s regular nonmember rate of $2,500.

New Jersey benefits tremendously from the investments and economic strength of its manufacturers. Manufacturing jobs offer careers that do not require a costly four-year college degree and pay considerably more than the average salary or wage. At NJBIA, we are doing all we can to support our manufacturers.