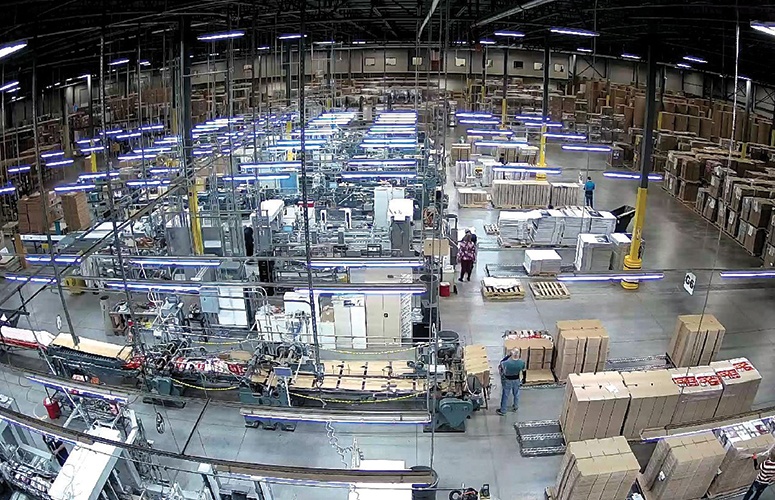 There are more than 11,000 manufacturers in New Jersey employing about 6.5% of the state’s workforce and accounting for $38 billion in sales, according to the New Jersey Manufacturing Extension Program (NJMEP). Chemical manufacturing is the state’s most dominant sector, but there are also a significant number of companies making pharmaceuticals, petroleum, food and other products. New Jersey’s diverse manufacturing community comprises companies both large and small – including the following:

When Henry Hirsh decided to start Accurate Box in 1944, he borrowed money from relatives and set up shop in Newark, selling boxes door to door to manufacturing businesses across Newark and Paterson. By 1950, the business was struggling so much that Henry’s son Charles, 20 at the time, was forced to leave college to help his father make a go of it, ultimately taking over when Henry passed away in 1964.

“As manufacturing started going overseas in the ‘60s and ‘70s, my father was able to pivot, concentrating on large boxes, which we began to sell to toy companies,” says Lisa Hirsh, third generation owner of Accurate Box, which celebrated its 75th Anniversary last month. It was during this time that Charles Hirsh brought in a European process called litho lamination – where a printed top sheet is laminated to a corrugated box – helping the company become a top supplier to Coleco, Mattel and Hasbro.

By the early 1980s, Lisa Hirsh and her husband Mark Schlossman had come on board and Accurate Box had moved to a 200,000-square-foot building in Paterson. In the next decade or so, the decline of toy making in the US, coupled with the rise of club stores like Sam’s Club and Costco, forced the company to switch gears once again. “The club stores were asking their customers for large corrugated boxes that could be stacked on palettes, so we started to grow that part of the business,” she says. “By the early ‘90s, it was so big we decided to concentrate on that and got out of the folding carton business altogether.”

Fast forward to 2019, and the food and beverage business continues to account for 80% of sales at Accurate Box. But the company is pivoting once again. “The e-commerce world is starting to explode, so we are now doing boxes that are brown on the outside with full graphics on the inside, heightening our customers’ brand and the consumer experience,” Lisa Hirsh says, adding that this is particularly important to the ‘unboxing’ trend, where boxes containing everything from electronics to makeup are opened on video and uploaded to the Internet.

Last January, DSM North America’s Belvidere facility expanded its solar field to 66 acres, making it the largest net-metered solar installation in New Jersey (Great Adventure has since surpassed it), and the second largest on the East Coast. Company executive Hugh Welsh described the project, which creates 100 percent renewable electricity to run the plant, as “part of DSM’s commitment to doing well by doing good for both our communities and our environment.”

This has long been the driving philosophy for the Netherlands-based company, a leader in nutrition, health and sustainable living, which moved into the New Jersey market in 2003 with the acquisition of Hoffman LaRoche’s Vitamins and Fine Chemicals Division. The $2.2-billion deal included the Belvidere site, which has 300 employees and where a number of nutrition-based food products are manufactured, and a Parsippany-based laboratory where DSM demonstrates its own and its customers’ products to show how ingredients work.

Welsh, a New Jersey native whose official title is president and general counsel of DSM North America, says doing business in New Jersey gives his company a distinct advantage. “We’re very much a science driven company that prides itself on innovation, and New Jersey has more scientists per square mile than anywhere else in the country,” he says. But while Parsippany is 50 minutes from Manhattan and a relatively easy draw for talent, not so much for the Warren County-based Belvidere plant, which is also having difficulty finding technically geared workers.

“As recently as a decade ago, a lot of manufacturing required physical labor, but today it’s less about moving large equipment and more about an operating environment that’s computer controlled with engineering needed,” Welsh says. “There’s not as much emphasis on vocational training and the local area doesn’t draw as much.”

But Welsh remains positive – particularly about DSM’s positioning as manufacturing moves toward automation and Artificial Intelligence – mainly because of the large talent pool coming out of New Jersey schools like NJIT, The College of New Jersey, and Stevens Institute of Technology. “Just as profound is the fact that we’re going to see much more collaboration as manufacturing moves away from heavy labor in favor of bio-technology and 3D printing,” he says.

“Because of educational opportunities and access to capital in New York, New Jersey should be well positioned to take advantage of these trends, much like Massachusetts and California have,” Welsh continues.

In 1975, when Brad Schreck was a student at Stevens Institute of Technology, he did clinical research and published a paper on the detection of acute myocardial infarctions (AMI) of the heart. What he never dreamed was that almost three decades later – with his physician brother David Schreck’s idea as the seed – he would start a company dedicated to improving the detection of heart problems and other medical issues.

Founded in Totowa in 2009, VectraCor, Inc. designs and develops medical devices to simplify and reduce costs of diagnostic testing as well as improve patient care. The most significant of these is the patented VectraplexECG System, which can perform an ECG and detect changes associated with a heart attack with only five electrodes – half the traditional number.

“When David was doing his residency, he wondered why he had to put 10 electrodes on a person coming in with chest pain,” says Schreck, who received a master’s degree in biomedical engineering from Stevens before earning an MBA in marketing from Fairleigh Dickenson University. “More than 60% of the time, the technician/nurse putting on electrodes is doing it wrong. As an engineer, his brother knew it could be done using only five electrodes, which helps reduce placement errors as well as reduce electrode cost and time to perform an ECG.”

In addition to the VectraplexECG System, VectraCor has numerous product development projects in the pipeline, and Schreck hopes to expand the number of programmers, engineers and sales and marketing people working at VectraCor’s New Jersey headquarters in the near future. However, he says, the cost of healthcare and employee relocation makes it tough for a small company.

“A lot of startups don’t survive, either because they don’t have a good product or they run out of

funding,” he says. “This is a revolutionary, disruptive technology that has worldwide patents, and we’re trying to build up our workforce in New Jersey – which is important to us – but have to make sure we grow within our financial constraints. We need to keep it profitable and identify funding to achieve our large growth potential.”

CompoSecure L.L.C., a pioneer in the design and manufacture of premium metal cards, hit the US market with the first metal transaction card in 2003. Founded in 2000 with 35 employees, its heritage dates back to 1910 as Sillcocks Plastics, known for producing celluloid collars for shirts. In 1952, the Herslow family made a majority investment in Sillcocks, bringing an expertise in chemical engineering and material science that laid the foundation for what would eventually become CompoSecure.

Today, CompoSecure has more than 600 employees and produces about 15 million metal cards annually, making it the worldwide leader in this category. “We’re specialized, only doing metal cards, where metal cards are just part of our competitor’s product offerings, which are primarily plastic,” says Dori Skelding, vice president marketing & supply chain. “One of our key differentiators is our ability to scale to accommodate our customer’s needs.”

CompoSecure has two state-of-the-art facilities in Somerset, combining more than 150,000 square feet of manufacturing space that allows for products to be shipped globally. Skelding says the company’s practice has been to hire from a diversity of work experiences, resulting in a unique and creative workforce – one that has produced over a dozen patents.

“Core to carrying on the vision of our co-founders, our workforce is comprised of people who are engineers, PhDs, and experts in many different industries. If they have skills and the ability to learn, we will do on-the-job training,” she says. “Everyone, including our management team, is tasked with identifying product and process improvements. This is crucial to our success as our products become more diverse.”

Another core component of Compo-Secure’s business is providing customers – who the company refers to as “partners” – with design and production services to help bring their cards to life. “A credit card is a two-by-three-inch piece of canvas, but on that one size there can be thousands of designs and opportunities to give our clients the ability to differentiate themselves in their own industry,” Skelding says.

In terms of innovation, the current challenge for CompoSecure includes incorporating contactless technology, commonly known as Tap & Go, into its card products. It is difficult enough to produce ISO-compliant metal cards, but to make payment cards that mimic the technology used in mobile wallets like Apple Pay and Google Pay requires the delicate balance of the technology and metal, which is a natural barrier to contactless technology, Skelding says.

“We got everyone to use the chip card, and now contactless is the new way to go,” she adds.