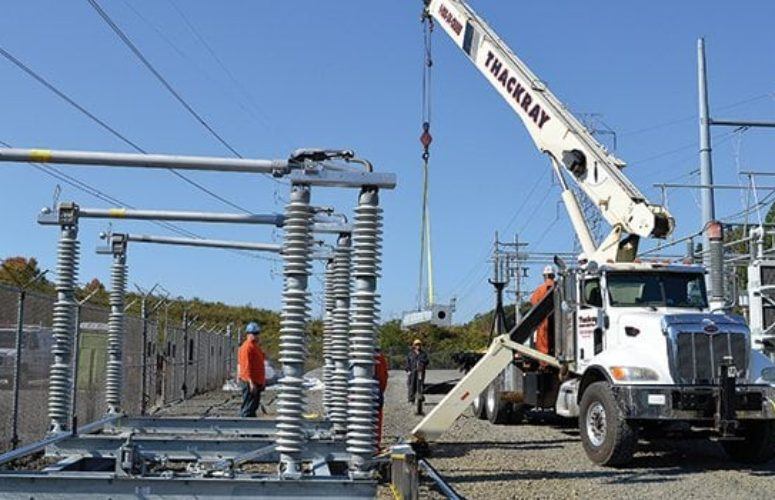 By Tim McEntyre, Contributing Writer On May 1, 2017

Electric providers in the state have efforts underway to upgrade their infrastructure and ability to operate more efficiently in terms of cost savings, while also creating a clearer path to reducing any negative impacts on the environment. At the same time, they are relying on the talents of their workers, among them members of various electric trade unions in the state, who are helping to build and maintain a more resilient power system.

As part of an ongoing effort to strengthen the durability and flexibility of its electric transmission and distribution systems, Jersey Central Power & Light (JCP&L) plans to invest $359 million during 2017 on infrastructure projects and other work to enhance reliability for its 1.1-million customers spanning across its 13-county New Jersey service area.

Some major projects scheduled for 2017 include finishing construction of a new 16-mile, 230-kilovolt (kV) transmission line in Monmouth County, building a new 34.5-kV power line in the county and installing new communication equipment across the JCP&L service area to help enhance remote-control capability. Other scheduled work includes 94 circuit upgrades, and replacing breakers and other voltage-regulating equipment.

“Our customers have benefited from the continuous investments and enhancements made over the past decade to JCP&L’s transmission and distribution systems,” says Jim Fakult, president of JCP&L. “During that time, nearly $3 billion has been invested to strengthen our electric system. In addition to the improved service reliability, the infrastructure work is designed to accommodate future growth in New Jersey’s economy.”

On another front, PSE&G plans to upgrade and replace its existing Sewaren Generating Station in Woodbridge, being retired after some 70 years in service. The “new and improved” Sewaren Generating Station began construction in 2016. The station will be a highly-efficient, clean, dual-fuel, 540-MW combined-cycle plant, representing an investment of more than $600 million. It is slated to be up and operating by summer of 2018. The plant will be primarily fed by natural gas, but also have a keen ability to run on an ultra-low-sulfur distillate fuel oil as a back-up plan, ensuring exceptional dependability.

The new combined-cycle plant, known as Sewaren 7, will be equipped with a state-of-the-art emission control technology system. The plant also represents a major investment in the local and regional economy, in terms of bringing with it significant new tax revenue to the region as well as additional jobs during the construction phase. By repowering this existing and antiquated site, PSEG will be able to implement adaptive reuse to an already in-place infrastructure, further enhancing a positive way of replacing older, less efficient generating units with cleaner, more efficient technology.

According to PSE&G spokesperson Karen A. Johnson, “PSE&G’s infrastructure investments have been driven by two R’s – reliability and resiliency. During the next five years, 50 percent of PSE&G’s $12.3-billion capital investment program is related to upgrading transmission lines to maintain the reliability that our more than two-million customers have come to expect.”

One thing is for sure, as a “cost of doing business,” the electric utility companies are investing a vast fortune in New Jersey, a state that has one of the oldest (likely due to its being one of the first) and complex electric infrastructure grids in the nation. Famed columnist Earl Wilson once said, “Benjamin Franklin may have discovered electricity, but it was the man who invented the meter that made the money.” – And perhaps rightly so, as the generation and distribution of electric power is an extremely complex and difficult task, not to mention an extremely costly endeavor in terms of the investments being made by the providers themselves.

Continuing in the spirit of this reinvestment, on March 30, Atlantic City Electric (ACE) asked the New Jersey Board of Public Utilities (BPU) to authorize a base rate increase of $70.2 million to support proposed upgrades and enhancements being made to its energy infrastructure allowing it to continue its forward momentum in strengthening South Jersey’s power delivery system.

In 2016, ACE spent nearly $160 million to maintain and strengthen those very systems as it constructed a new distribution substation in Cape May County and replaced hundreds of deteriorated utility poles throughout its service territory. The company completed nearly 30 separate substation enhancement projects that included new transformers, switchgear and other equipment, and completed reliability improvements on 41 distribution feeders that significantly improved service for their customer base.

“Modernizing our energy infrastructure is critical to providing quality service to our customers who rely on us to power their lives and the Southern New Jersey economy,” says Vince Maione, Atlantic City Electric region president.

Another aspect of New Jersey’s power grid is that of wind (turbine) power. While it is not currently a prominent factor, it does exist in the form of the Jersey-Atlantic Wind Farm in Atlantic County. On the site of its wastewater treatment plant, it generates approximately 60 percent of the plant’s power.

There is also a proposed plan in the works by Fishermen’s Energy to build a “windmill farm” off the New Jersey’s coast near Atlantic City that could generate enough electricity to power around 15,000 homes. The deal is currently “in the wind” as the US Department of Energy recently planned to revoke funding in lieu of alleged missed deadlines by Fishermen’s Energy. It appears, however, that the company is still trying to negotiate a move forward with the project. There are additional plans by Statoil, a Norwegian energy company, also proposing such farms off of New Jersey’s coastline.

So perhaps, if the “winds shift” and the these project’s move forward, it will give a whole new meaning in the Garden State to the term – “Go Fly a Kite” – which is how some say electricity was actually discovered in the first place.